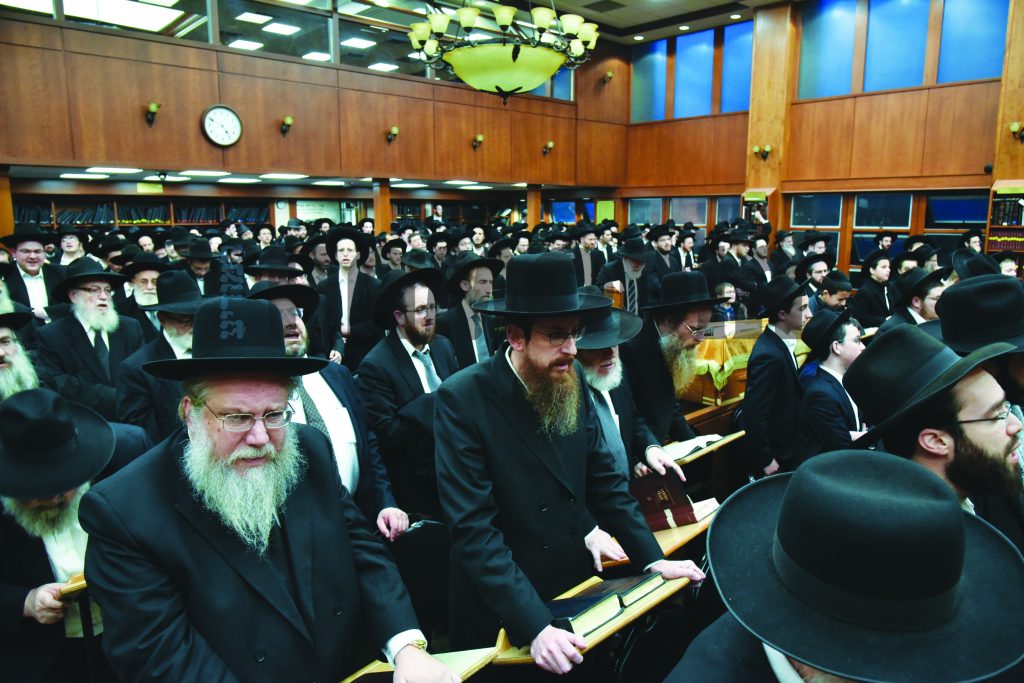 Picture a middle-aged woman, living in England near many married children and grandchildren, reaping nachas from them and comfortably ensconced in the place she had lived her whole life. Her husband is a successful Mashgiach in the nearby yeshivah. She is a well-known mechaneches, frequently delivering shiurim for the women of the town.

Suddenly, there’s a change in plans. They are being asked to relocate, across the ocean, to far-off America.

How does she feel about this?

“It’s good,” she tells her son. “Tatty has an opportunity for more harbotzas haTorah.”

And so, Rebbetzin Miriam Salomon left her beloved Gateshead, left most of her family behind, and moved to Lakewood for her husband’s sake and for the sake of Klal Yisrael.

Let’s rewind a little, though. Harav Nosson Wachtfogel, zt”l, the original Mashgiach of Bais Medrash Govoha, was in his 90s, and was thinking ahead to the future of BMG and the position he would one day vacate. One night he had a dream, telling him that his successor was in England. After some investigation, he discovered Harav Mattisyahu Salomon, shlita, who was then the Mashgiach of the Gateshead yeshivah. He felt that this was the person he was looking for.

So began a new period in Lakewood, and among world Jewry.

Rav Mattisyahu Salomon became the beloved “Tatte fun Klal Yisrael” and his Rebbetzin became the “Mamme fun Klal Yisrael.” Harav Yeruchim Olshin, Rosh Yeshivah of BMG, said in his hesped for this wonderful woman, “A tatte is someone who worries about his children and takes care of them, and so is a mamme.” True to this description, they carried the tzibbur on their shoulders.

There was the kallah who found out disturbing information about her chassan the day before her chuppah. What did her school principal do? Rush with her to the Salomons.

A woman wanted to know if she was justified in asking for a get. Whom did she call? The Salomons.

Parents discovered that their son was addicted to the internet, R”l. Where to turn? The Salomons.

They advised, they investigated, they were the shoulders to cry on. They were a tatte and a mamme to Klal Yisrael.

The Salomon household was an open home, with people coming and going at all hours of the day and night. One would think that the balabusta would resent the constant traffic. But nothing was farther from the truth. Rebbetzin Salomon always had a bright smile on her face, and welcomed everyone graciously and warmly.

Rebbetzin Salomon visited a certain almanah every Friday night. When the Rebbetzin was in England, she called her on Fridays to wish her a gut Shabbos.

The Salomons made a chasunah and a neighbor couldn’t attend due to the laws of aveilus. Sure enough, a knock on the family’s door that evening brought an entire chasunah seudah from Bais Faiga.

Rebbetzin Salomon had severe trouble with her legs, but that didn’t stop her from making sheva brachos for people, although she sometimes had to direct the preparations from her chair.

Perhaps due to the fact that the Mashgiach was orphaned as a child, the Salomons were particularly sensitive to yesomim and almanos. Besides their usual guests, there were always many almanos and yesomim around their table each Shabbos.

Everyone who made a simchah knew that Rebbetzin Salomon would attend and grace their simchah with her beautiful smile and warm demeanor.

But Rebbetzin Salomon did not focus on her public role. Her true throne of majesty, as the maspidim all said, one after the other, was kol kevudah bas melech penimah — in her home, at her kitchen table.

Everyone knew Rebbetzin Salomon was always available, answering the constantly ringing phone warmly and graciously. She tried her utmost to help the throngs who begged for an audience with her esteemed husband. But at the same time she tried desperately to protect her husband’s health and wellbeing, to try to give him some semblance of normal life despite the constant pressure of people wanting to see him.

But what we didn’t know and only found out at the levayah was how much she had a chelek in the Mashgiach’s ruchniyus.

“Tonight is Monday night,” began her son, Harav Yehudah Salomon of England. “Every Monday night my father gave a shmuess, and for hours before the shmuess, while my father prepared, my mother sat at the kitchen table saying Tehillim for his hatzlachah with the shmuess. Then the Mashgiach would come into the kitchen and ask his Rebbetzin to bentch him with hatzlachah. Only then would he leave.”

Rav Yehudah told how once when she was in England and the Mashgiach was home in Lakewood, she stayed up when everyone else went to sleep (due to the five-hour time difference), saying Tehillim for her husband who was in Lakewood preparing his shmuess.

This past Friday, when the Rebbetzin was semi-comatose in Columbia Presbyterian Hospital and couldn’t talk, she motioned for a pen and paper and wrote a note to her chashuve husband: “Gei tzurik tzu yeshivah,” she wrote, asking him to go back to yeshivah.

A second son who was maspid, Harav Moshe Salomon, told the story of how poor his parents were when they were a young couple, but how his mother was moser nefesh for her husband’s learning. Rav Mattisyahu had wanted a set of Shulchan Aruch, which was beyond their means. She scrimped and saved until she had enough money for one volume. Then, a few months later, she went back to the sefarim store and bought another volume. So it continued until this ishah kesheirah was able to buy her husband the entire set of Shulchan Aruch.

Of course, the storekeeper had initially offered to give her the entire set at once and let the Rebbetzin pay it off slowly, as she could. However, the idea of going into debt did not sit well with the Rebbetzin’s scrupulous integrity. And so the precious set was procured volume by volume.

Rav Yehudah, addressing the women and girls at the levayah, pointed out how the Rebbetzin had lived and breathed respect, admiration and moral support for her husband, and he asked that they should do the same. He also implored them to be happy to be at home, as his mother was.

Rebbetzin Salomon’s children were deeply precious to her. She spent a lot of time with them when they were growing up, and would never go to sleep until all of them came home and she had spoken with each one, treating them with goodies as a reward for their day of learning.

“When we traveled, we knew she was traveling with us,” said another son, Harav Moshe Salomon. “When I was learning in Ponevez, she wrote me three long letters every week.”

The story of Rebbetzin Salomon’s kibbud av va’eim epitomized her caring for others at her own expense.

Her mother-in-law, a lonely almanah, lived nearby. One day, the young wife said to her husband, “We don’t need to eat together as much as your mother needs to eat with someone. Go and eat with her instead of me!”

What a person we lost!