Israel Firefighting Help on the Way to Israel From Italy, Greece
Israel 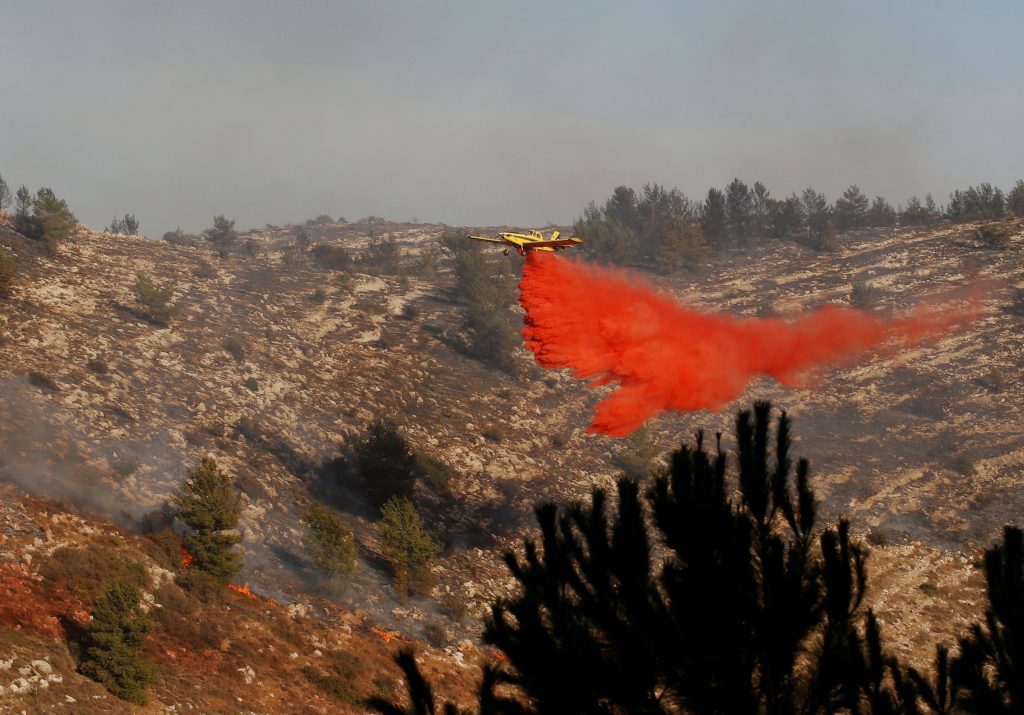 Fires continued to plague Israel Wednesday afternoon, as a large blaze broke out in the Yerushalayim Hills. High winds continued to push the flames westward, and there was fear that the new fire that had broken out in the Latrun area would reach Road 1, the main Tel Aviv-Yerushalayim road. Other fires broke out in the area of Rechasim, near Haifa, and next to the Tzrifin air force base. Another large fire broke out near Kiryat Arba. The latter two were brought under control quickly, but not before they had burned down dozens of dunams of natural growth and closed several roads, along with generating massive amounts of pollution.

Late Wednesday, another fire broke out near Misgav in northern Israel. Officials were still battling the resurgent fire in Zichron Yaakov that caused damage and sent 23 people to the hospital Tuesday and reignited on Wednesday, as high winds fanned the remains of the blaze and spread it in new directions. Ten homes in the town were burned to the ground, with another 30 suffering partial damage. Most of those treated as a result of the fire suffered from mild cases of smoke inhalation and were released from the hospital within hours, but three people were still in the hospital as of Wednesday morning. Air pollution levels in the area were very high as a result of the fire, environmental officials said.

Meanwhile, suspicions mounted that the majority of the dozens of fires that have broken out in Israel over the past few days were deliberately set by Arabs. On Wednesday afternoon, witnesses reported seeing two Arab setting fires near Beit El, in the Binyamin area. Security forces were alerted and the Arabs were arrested. On Tuesday, Public Security Minister Gilad Erdan said Tuesday that “it appears that at least some of the many instances of fires that we are experiencing could be due to arson. Police and fire investigators will do everything possible to find the arsonists, if it indeed turns out that they did this deliberately.”

The fires were being exacerbated by higher than average temperatures, extremely low levels of humidity, and high easterly winds. The three conditions were conspiring to create extremely dry conditions, which have caused the fires that broke out on Tuesday and Wednesday to spread quickly.

Israel’s firefighting capacity was being stressed near to its limits, Erdan said Wednesday, and he was working to arrange for planes and other firefighting equipment from neighboring countries like Italy, Cyprus and Greece to be sent to Israel to help out. Israel has agreements with these countries to provide mutual assistance in the event of a major fire emergency. The current conditions are supposed to be prevalent on Thursday as well, and officials are fearful that further fires will break out.

A large fire at Nataf in northern Israel was brought under control after many hours and much effort, but not before it burned two houses to the ground. Police have arrested four workers who they say caused the fire. The workers were laboring on a road-paving project, and a fire they had started in order to melt tar that was supposed to be controlled got out of control, police suspect. The four were released after being questioned.