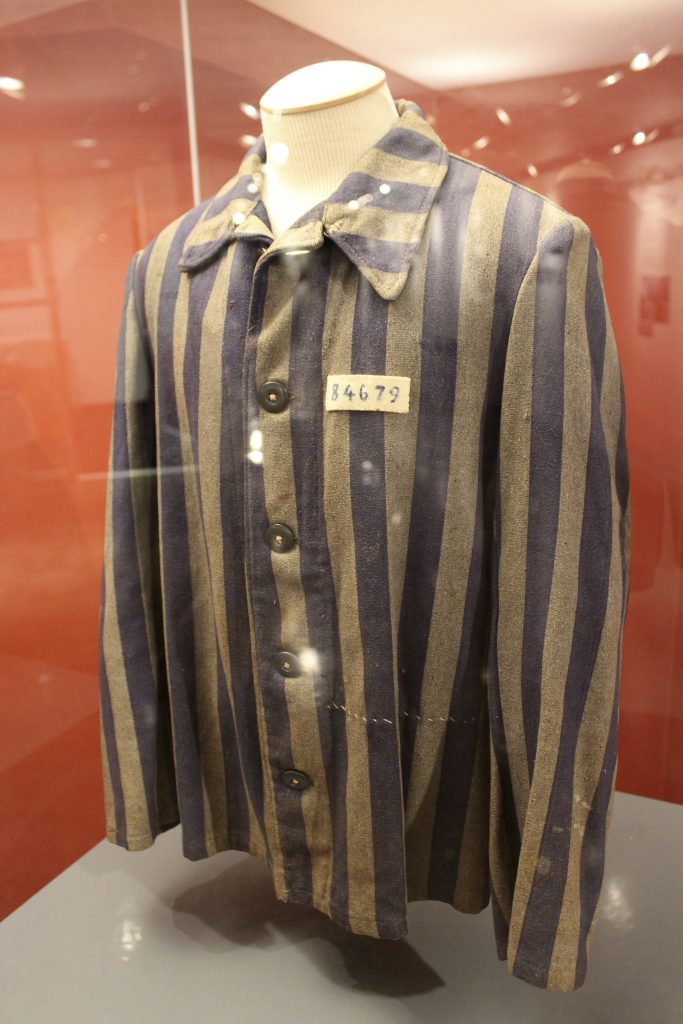 The blue and gray stripes struck Jillian Eisman like a lightning bolt.

She was rummaging through a packed closet during a Long Island tag sale when she immediately recognized the symbol of horror and hate: A jacket worn by a prisoner at the Nazi Dachau concentration camp during World War II.

“I knew exactly what it was, even before I saw the numbers (84679 on the chest),” said Eisman, who purchased the jacket for $2 at the sale last year and donated it to the Kupferberg Holocaust Center in New York City.

Curators there not only put the jacket on display, but also unearthed the story of the person who wore it: a teenager forced to make munitions for the German war effort, who spent four years in a relocation camp and then came to America, never telling his children much about Dachau or that he kept the jacket.

The story of Benzion Peresecki — who later became Ben Peres — is told in extraordinary detail, thanks largely to the serial number and careful records he kept which his daughter found long after he died.

“It was known to us that my father and grandmother had both been in the Holocaust,” said Lorrie Zullo, who was 13 when her father died in 1978. “We knew he had a brother who had been killed. But he did not talk about it much.”

Her brother, Michael Peres, who was 15 when their father died, said: “He wanted to protect us as kids. He saw people die every day.”

Holocaust historians say jackets such as the one saved by Peres are fairly rare, since most of the clothing worn by concentration camp prisoners was burned because of lice and other potential diseases. Also, most freed prisoners didn’t want to keep reminders of their horrifying ordeal.

Cary Lane, curator of the exhibit, said Peresecki was spared when Nazis invaded his Lithuanian homeland because he was 15; all Jews 16 and older, including his father and 17-year-old brother were executed. The stocky, 5-foot-4 teenager was put to work making munitions, and years later wrote about repeated beatings he suffered as a prisoner.

“When Ben was liberated, I think there was a conscious effort on his part to document and hold onto things, which not only proved his suffering, but also symbolically for himself, were evidence of his own survival.” Lane said.

Peres spent four years in a “displaced persons” camp, where he was reunited with his mother and earned a high school equivalency diploma.

Eventually making his way to the United States, he lived in several New York City locations with his mother and his wife. He received a degree from Cooper Union in Manhattan and worked as a mechanical engineer.

He raised his family on Long Island and frequently took them on vacations; most photos of him taken in those years show him with a broad, happy smile.

“He was affectionate, loving,” his daughter said. “He was kind of the glue of the family.”

Zullo said she was “flabbergasted” when she heard that the jacket had been found hidden in a closet in the house where she was raised. “I didn’t even look through it before the sale,” she said.

“What are the odds of someone finding it and recognizing it for what it is and then actually donating it to where it should have gone?”

Eisman, whose 24-year-old brother, Joshua Birnbaum, was killed in the terror attacks on Sept. 11, 2001, said she feels “everything happens for a reason.”