National FOCUS: Giuliani’s Ties to Foreign Entities Could Be a Complication
National 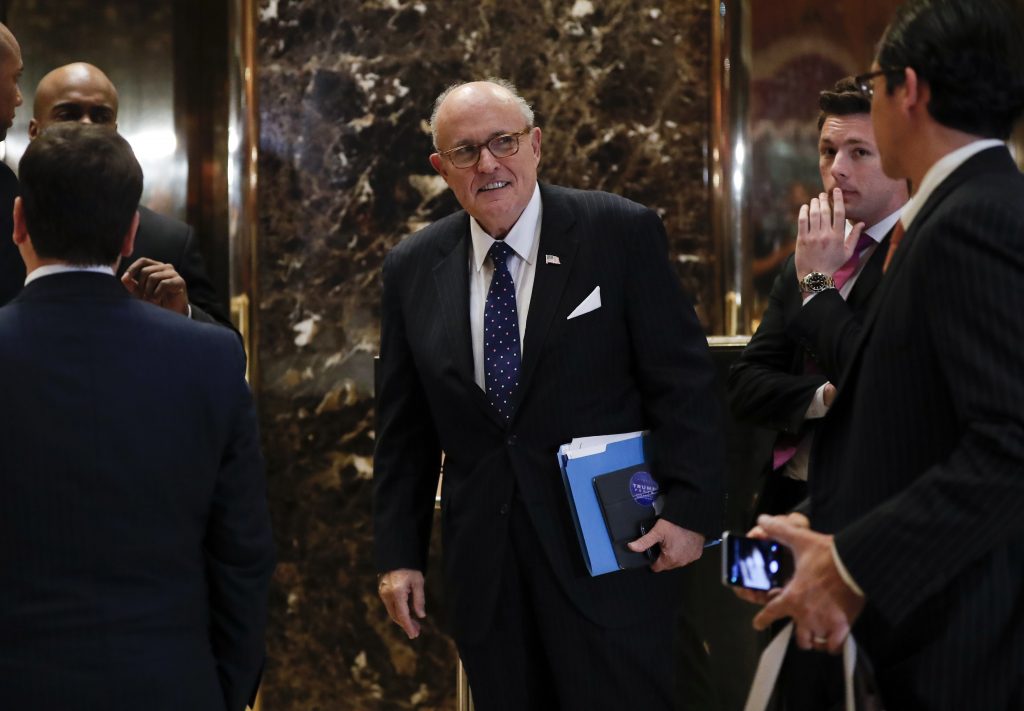 Rudy Giuliani, President-elect Donald Trump’s top candidate for top diplomat, has advised foreign political figures and worked for lobbying and security firms whose clients have had complicated relationships with the U.S. government.

While not personally involved in lobbying, Giuliani spent years at firms which represented governments and multinational companies, some of which had interests that diverged from those of the United States. He also made speeches demanding the State Department remove an Iranian opposition group from a U.S. terror blacklist.

As the former New York mayor waits to discover if he is Trump’s choice for secretary of state, Giuliani’s extensive consulting and advising work for foreign and corporate clients could expose him to the same criticisms he raised about former Secretary of State Hillary Clinton’s ties to foreign governments and corporations that had donated to her family charity, the Clinton Foundation.

“What she did with the Clinton Foundation and all the favors the State Department did for hundreds of millions of dollars is, to me, clear violation of the conflict of interest law,” Giuliani told CNN in August.

But when Clinton was secretary of state, she was the one concerned about Giuliani after he took a trip to Belgrade and met with leaders of a Serbian political party once allied with Serbian strongman Slobodan Milosevic.

“This is outrageous,” Clinton wrote in an April 2012 email after her chief of staff, Cheryl Mills, forwarded a copy of an Associated Press story about Giuliani’s meeting with Serbian Progressive Party officials. Milosevic, accused of war crimes for his conduct in the Balkan wars of the 1990s, died in prison a decade ago.

A longtime associate defended Giuliani’s extensive international work Wednesday, saying the former mayor currently has only one international security contract. It is with the government of Colombia, said the associate, who asked not to be identified because he wasn’t authorized to speak officially for the former mayor. He said Giuliani would provide lengthy public disclosure of his business interests, if nominated.

Giuliani did not respond to requests, made through his associate, to speak to the AP. In an interview Tuesday with the New York Times, Giuliani said he never lobbied for any interests, foreign or otherwise. He defended his consulting firm’s work in the Persian Gulf monarchy of Qatar and the money he received for supporting the Mujahedin-e Khalq, the Iranian dissident group, even as it was a U.S.-designated foreign terrorist organization.

“I have friends all over the world,” Giuliani said. “This is not a new thing for me. When you become the mayor, you become interested in foreign policy. When I left, my major work was legal and security around the world.”

For most of 2016, Giuliani worked as a senior adviser and head of the cybersecurity and crisis management division at lobbying giant Greenberg Traurig. At the same time, he played a prominent role as Trump’s media and political rally supporter. Giuliani took a leave of absence from the firm in October to work full-time for Trump.

During Giuliani’s tenure, Greenberg Traurig’s lawyers worked for a host of foreign clients, including Turkish President Recep Tayyip Erdogan’s government, which has been accused of eroding democracy. It also worked for a Belarusian potash firm suspected by several U.S. senators of evading Treasury Department sanctions. Other clients at the time included Mexico’s agriculture agency, a Libyan think-tank, the governments of Panama and East Timor, and Iraq’s autonomous Kurdistan region, according to federal foreign agent filings with the Justice Department.

Giuliani’s associate said he has not met any foreign officials for Greenberg Traurig and isn’t involved with the firm’s government lobbying practice.

Giuliani has never registered with the government as a lobbyist. Instead, he acted abroad as a security consultant and occasional political adviser, even though his actions sometimes sought to influence U.S. policy.

Giuliani joined prominent politicians — Democrats and Republicans, many of them paid — in petitioning the State Department to de-list Iran’s MEK, which was linked to assassinations of at least six Americans in the 1970s and a string of attacks against the Iranian government. When the group was finally taken off the terror list in 2012, by Clinton’s State Department, U.S. officials said it hadn’t committed any acts of terrorism in at least a decade.

“My ties to them are very open,” Giuliani told the Times.

His work included speeches in Washington and Berlin and signing a letter along with influential former government officials, including James Jones, President Barack Obama’s onetime national security adviser. Another signature included that of former U.N. ambassador John Bolton, who is also in contention to become Trump’s secretary of state.

If nominated, Giuliani would have to describe his finances much like he did during his 2007 presidential campaign. The disclosure he filed for that campaign showed he was already a multimillionaire with assets between $18 million and $70 million.

Giuliani was a frequent critic of Clinton’s paid speeches to special interests during her campaign against Trump. But Giuliani’s own foray into the lecture circuit in the mid-2000s could pose similar potential ethics problems.

From late 2005 through early 2007, Giuliani made more than 100 paid speeches — most for $100,000 each — to oil companies, investment banks and Wall Street firms, including Lehman Brothers, JP Morgan Chase & Co. and Merrill Lynch & Co. Giuliani earned $9.2 million for the speeches over a 15-month period, according to his presidential financial disclosure.

Giuliani, who founded his global management firm, Giuliani Partners, in 2002, refused to divulge his firm’s clients when he ran for president.