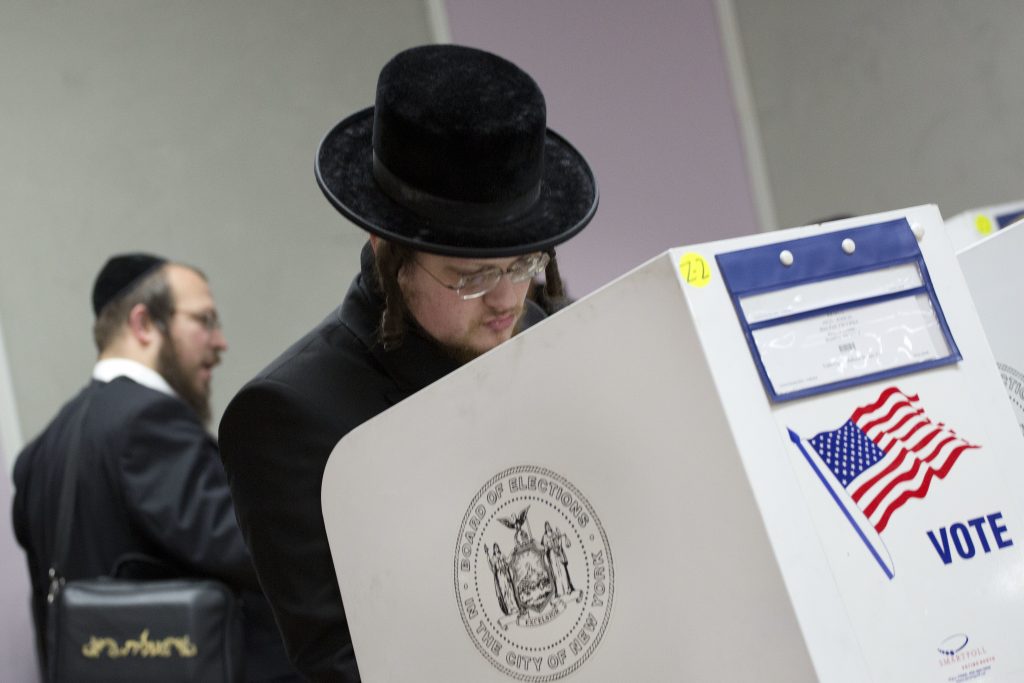 America’s ugly and unpredictable presidential election entered its final hours Tuesday, with voters flocking to polls to choose between Democrat Hillary Clinton, hoping to become the first woman to serve as commander in chief, and Republican Donald Trump, the billionaire businessman who tapped into a searing strain of economic populism.

Clinton appeared to have multiple paths to triumph, while Trump needed to prevail in most of the battleground states to secure an upset. Control of the Senate was also at stake, with Democrats needing to net four seats if Clinton wins the White House.

The 45th president will inherit an anxious nation, deeply divided by economic and educational opportunities, race and culture. The economy has rebounded from the depths of recession, though many Americans have yet to benefit. New terror threats from home and abroad have raised security fears.

Clinton asked voters to keep the White House in Democratic hands for a third straight term. She cast herself as heir to President Barack Obama’s legacy and pledged to make good on his unfinished agenda, including passing immigration legislation, tightening restrictions on guns and tweaking his signature health care law.

“I know how much responsibility goes with this,” Clinton said, after voting Tuesday at her local polling station in Chappaqua, New York, with her husband, former President Bill Clinton, at her side. “So many people are counting on the outcome of this election, what it means for our country, and I will do the very best I can if I’m fortunate enough to win today.”

Trump, the New York real estate developer who lives in a gold-plated Manhattan penthouse, forged a striking connection with white, working-class Americans who feel left behind in the changing economy and diversifying country. He cast immigration, both from Latin America and the Middle East, as the root of many problems plaguing the nation, and called for building a wall along the U.S.-Mexico border.

“I see so many hopes and so many dreams out there that didn’t happen, that could have happened, with leadership, with proper leadership,” he said by telephone on Fox News before casting his own ballot in Manhattan. “And people are hurt so badly.”

Seven in 10 Americans who went to the polls Tuesday said immigrants now in the country illegally should be allowed to stay, while just a quarter said they should be deported. More than half oppose building a border wall, according to preliminary results from the exit poll conducted for The Associated Press and television networks by Edison Research.

The Republican Party’s tortured relationship with its nominee was evident right up to the end. Former President George W. Bush and wife Laura Bush declined to back Trump, instead selecting “none of the above” when they voted for president, according to spokesman Freddy Ford.

Trump set both parties on edge when he refused to say in the third and final debate whether he would accept the election’s results, citing with no evidence the possibility of a rigged outcome. His statement threatened to undermine a fundamental pillar of American democracy and raised the prospect that his fervent supporters would not view Clinton as a legitimate president if she won.

Asked Tuesday in an interview with Fox News if he would accept the election results, Trump continued to demur, saying “We’re going to see how things play out.”

According to the preliminary exit polls, most Americans who voted had at least a moderate amount of confidence that election ballots would be counted accurately.

Most problems that did pop up at polling places Tuesday appeared to be routine — the kinds of snags that come every four years, including long lines, machines not working properly and issues with ballots or voter rolls.

Even before Tuesday, almost 45 million people had cast ballots for president. Many expressed relief the end was in sight after an election season in which personal attacks often drowned out the issues.

“I’m tired of the mudslinging,” said Laura Schmitt, a 54-year-old Republican from Woodbury, Minnesota, who was voting for Trump. Emetric Whittington, a 51-year-old Democratic mother of three on Chicago’s violence-plagued South Side, agreed: “I can’t wait for this night to be over.”

Clinton has denounced Trump for describing Mexican immigrants as criminals and promoting a ban on Muslims entering the U.S., and for his long line of demeaning remarks about women. Trump called his opponent “Crooked Hillary” for her use of a private email server as secretary of state and her complicated ties to the family’s Clinton Foundation.

“I can’t vote for somebody who’s so morally reprehensible,” said Lisa Moore, a 48-year-old Republican from Glen Rock, New Jersey, who picked Clinton. Democrat Charles Ikner of Cross Lanes, West Virginia, opted for Trump, saying it was time for “fresh blood” in the White House.