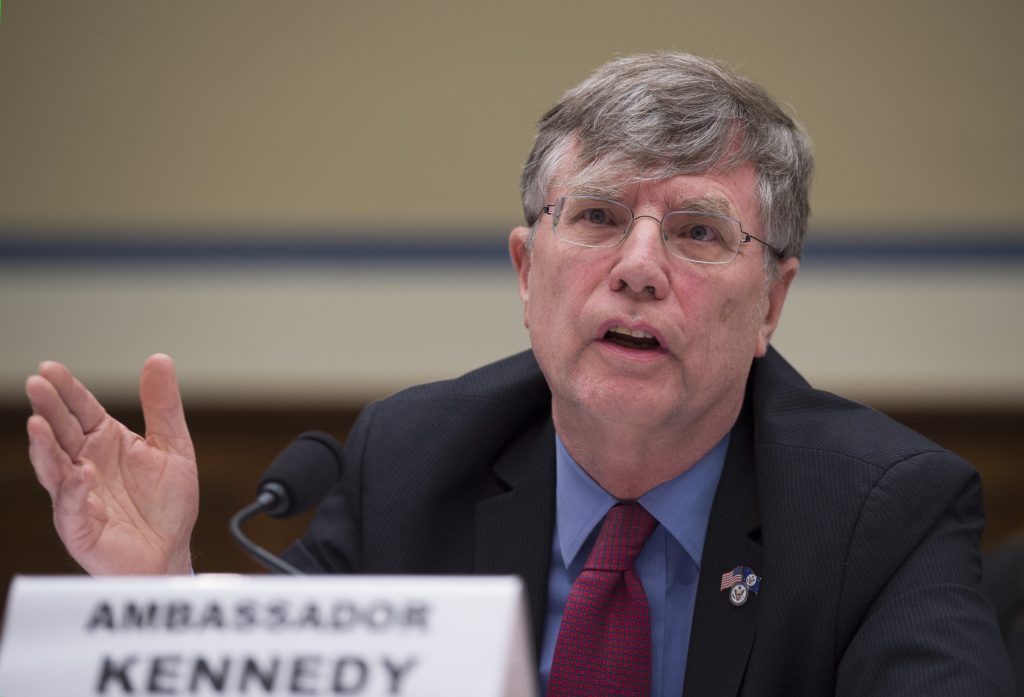 Allegations of a quid pro quo between the FBI and State Department emerged Monday in documents released by the law-enforcement agency as part of its investigation into Hillary Clinton’s use of a private email server.

According to the documents, which were based on interviews with FBI agents, a high-ranking State Department official allegedly sought to pressure the Bureau into changing the classification of an email related to the Benghazi attack in exchange for agreeing to help place more FBI agents in places like Iraq, where they are restricted.

But there were starkly different descriptions of who hatched the alleged deal.

One FBI official suggested that Undersecretary of State for Management Patrick Kennedy offered to assist the Bureau in placing more agents in return for the change in classification. But another top agent suggested that he was the one who first broached the idea.

The State Department and FBI denied that there was ever any deal and noted that the email’s classification was not changed because the bureau reaffirmed its original decision. The FBI also did not receive more slots in Baghdad as a result of the discussion, officials said.

Though the discussions of a quid pro quo were recounted by FBI agents in their interviews, it was determined that no such deal occurred, officials emphasized.

“There was never a quid pro quo,” the FBI said in a statement.

“The allegation of any kind of quid pro quo is inaccurate and does not align with the facts,” State Department deputy spokesman Mark Toner said. He dismissed the matter as an interagency exchange over how to classify information, a process that he said “was more art than science.”

The redacted FBI accounts were among about 100 pages of documents released by the Bureau in response to public-records requests concerning its investigation of whether the former Secretary of State improperly handled classified information on a private email server that she used while serving as the nation’s top diplomat.

The discovery that Clinton had sent and received dozens of emails containing classified information over the private system has become a major issue in her campaign for the presidency.

In their interviews, FBI officials and agents, whose names were not disclosed, said that the agency received a request from the State Department in May or June 2015 to reconsider the classification of the email.

According to one FBI agent, Kennedy said that the agency’s classification of the email related to Benghazi “caused problems for Kennedy.” Kennedy asked whether the classification could be removed.

The goal, however, does not appear to have been to allow the information to be released, but instead to apply a separate Freedom of Information Act exemption “that would allow him to archive the document in the basement of (the Department of State) never to be seen again.”

In that exchange, it is the FBI agent who is described as offering a deal, telling “Kennedy he would look into the email matter if Kennedy would provide authority concerning the FBI’s request to increase its personnel in Iraq.”

After discussing the matter with FBI counterterrorism officials, the agent told Kennedy there was nothing he could do.

In another account of the matter, an official in the Bureau’s records division described being pressured by a colleague in the agency’s international-operations division. The colleague said that Kennedy had asked for help in “altering the email’s classification in exchange for a ‘quid pro quo’” that would have allowed “the FBI to place more agents in countries where they are presently forbidden,” the FBI report says.

That FBI official also said he believed that the State Department “has an agenda which involves minimizing the classified nature of the Clinton emails in order to protect State interests and those of Clinton.”

When FBI officials refused to change the designation of the email, Kennedy was referred to Michael Steinbach, then the top counterterrorism agent in the bureau.

Steinbach, who now oversees the national-security division, refused to change the email’s classification.

In a statement from Donald Trump’s campaign, retired Army Lt. Gen. Michael Flynn said that the FBI documents show that Clinton “colluded with the FBI.”

There were no allegations in the documents that Clinton played any role in the matter. She departed the State Department in 2013.

Clinton campaign manager Robby Mook cast the matter as further evidence of typical disputes between the State Department and other government agencies.

“It’s not uncommon for officials within a department to fight over classification,” he said. “This is something that took place entirely within the government and with the State Department, so I’ll leave it to (them) to talk about that.”