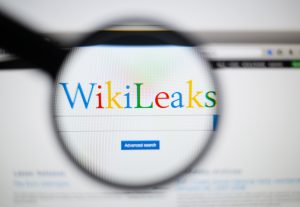 Excerpts of Hillary Clinton’s paid speeches, including those to Wall Street, were leaked Friday, a revelation that may perpetuate criticism that she is an out-of-touch Washington insider and could create trouble for her in the final weeks of her campaign for president.

“Obviously, I’m kind of far removed because the life I’ve lived and the economic, you know, fortunes that my husband and I now enjoy, but I haven’t forgotten it,” Clinton told Goldman-Black Rock on Feb. 4, 2014.

In the transcripts, Clinton acknowledges that she can’t relate to everyday Americans and admits she’s created a public personality separate from who she is in private. She discusses her positions on trade, health care and Wall Street.

“Politics is like sausage being made,” Clinton told the National Multi-Housing Council on April 24, 2013. “It is unsavory, and it always has been that way, but we usually end up where we need to be. But if everybody’s watching, you know, all of the back room discussions and the deals, you know, then people get a little nervous, to say the least. So, you need both a public and a private position.”

The partial transcripts of the speeches were published by the anti-secrecy website WikiLeaks as part of a leak of more than 2,000 emails belonging to her campaign chairman, John Podesta. McClatchy could not verify the authenticity of the emails, and Clinton’s campaign declined to confirm their authenticity.

The release came on the same day that the Obama administration accused Russia of being behind the hacking of Democratic National Committee computers in June, and four days after WikiLeaks founder Julian Assange said he would begin 10 weeks of releases of what he said would be more than 1 million documents.

“Earlier today the U.S. government removed any reasonable doubt that the Kremlin has weaponized WikiLeaks to meddle in our election and benefit Donald Trump’s candidacy,” Clinton campaign spokesman Glen Caplin said. “We are not going to confirm the authenticity of stolen documents released by Julian Assange, who has made no secret of his desire to damage Hillary Clinton.”

Caplin said other hackers have already proven the warnings of top national-security officials that “documents can be faked as part of a sophisticated Russian misinformation campaign.”

Clinton has repeatedly refused to release transcripts of her speeches, a position that became a fierce point of contention with her opponent in the primaries, Sen. Bernie Sanders, whose campaign focused on assertions that Clinton was part of the moneyed Washington establishment. Clinton made about $21.5 million on speeches after she resigned as secretary of state in early 2013 and before she launched her presidential campaign in the spring of 2015.

“Team, attached are the flags from HRC’s paid speeches we have from HWA. I put some highlights below. There is a lot of policy positions that we should give an extra scrub with policy,” he wrote.

Some of Clinton’s speeches would have been campaign fodder for Sanders.

In a speech to a symposium hosted by the investment bank Goldman Sachs on Oct. 24, 2013, Clinton indicated that Wall Street insiders knew best what sort of regulations the markets needed.

“There’s nothing magic about regulations, too much is bad, too little is bad. How do you get to the golden key, how do we figure out what works? And the people that know the industry better than anybody are the people who work in the industry,” Clinton said.

And in a speech at the University of Connecticut on April 23, 2014, Clinton voiced deep awareness that foreign governments were intercepting State Department communications and personal emails.

“At the State Department we were attacked every hour, more than once an hour by incoming efforts to penetrate everything we had. And that was true across the U.S. government,” Clinton said. “And we knew it was going on when I would go to China, or I would go to Russia, we would leave all of our electronic equipment on the plane, with the batteries out, because this is a new frontier. And they’re trying to find out not just about what we do in our government. They’re trying to find out about what a lot of companies do and they were going after the personal emails of people who worked in the State Department.”

According to the email, in a Jan. 6, 2014, speech to General Electric’s Global Leadership Meeting in Boca Raton, Fla., Clinton also lamented the high cost of campaigns as “so ridiculous” and described it as a “kind of free for all” that the Supreme Court allowed.

“So we’re kind of in the wild west, and, you know, it would be very difficult to run for president without raising a huge amount of money and without having other people supporting you because your opponent will have their supporters. So I think as hard as it was when I ran, I think it’s even harder now,” Clinton said.

“With today’s WikiLeaks revelations we are finding out who Hillary Clinton really is, and it’s not hard to see why she fought so hard to keep her transcripts of speeches to Wall Street banks paying her millions of dollars secret,” Reince Priebus, the Republican National Committee chairman, said in a statement. “The truth that has been exposed here is that the persona Hillary Clinton has adopted for her campaign is a complete and utter fraud. How can Bernie Sanders and many like-minded Democrats continue to support her candidacy in light of these revelations?”

Analysts doubted that the excerpts would have much effect now. In New Hampshire, where the race is too close to call and Sanders still has a strong following, pollster Andrew Smith, director of the University of New Hampshire Survey Center, said the Clinton news wouldn’t make much difference. “Most of this is already baked into the cake,” he said.

In North Carolina, Jason Husser, director of the Elon University Poll, agreed the effect would be minimal. “While some of Clinton’s quotes certainly aren’t helpful to her,” Husser said, “they largely confirm suspicions that many in the Sanders’s coalition already begrudgingly accepted as they switched to Clinton over Trump.”

In California, Democratic consultant Bob Mulholland agreed the Clinton news would not hurt her. “With only 33 days left, most voters have concluded the candidates have warts,” he said, and have made their decisions with that in mind.