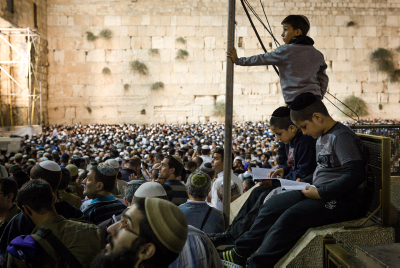 Preparations are underway for the final Selichos at the Kosel on Monday night, Erev Yom Kippur, when tens of thousands are expected to join Chief Rabbis Harav David Lau and Harav Yitzchak Yosef at the late-night Selichos. Police are recommending that drivers  avoid the area near the Old City Monday afternoon and evening, and suggested that drivers park their cars at parking lots on the edge of town and either take the light rail or available free shuttle buses to the Kosel.

The Selichos on Monday night may even set a record for attendees, police believe – breaking a record that was set just on Thursday night, Erev Shabbos Shuvah, as 80,000 people jammed the Kosel plaza to hear Selichos led by Harav Shmuel Eliyahu, Chief Rabbi of Tzfas. Hundreds of buses from all around the country jammed the site, and at one point police closed down all roads leading to the Old City. Attendance was about double what was expected. One thousand shofaros were sounded during the recitation of the 13 Middos, as is the Sephardic custom in Eretz Yisrael even after Rosh Hashanah.

Mass Selichos will be held this week at other locations, including Me’aras Hamachpelah, Har Hazeisim, Kever Rochel, Kever Yosef and in Chomesh, the northern Shomron town abandoned by Israel in the 2005 disengagement.