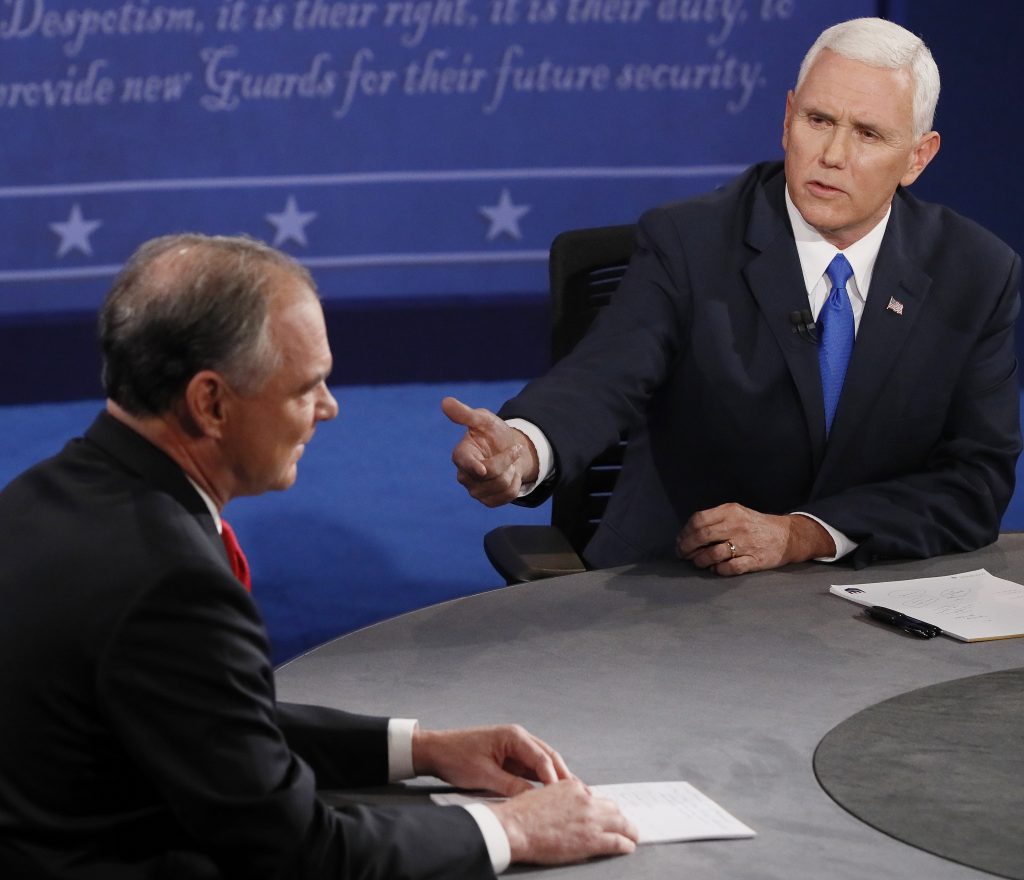 Indiana Gov. Pence and Virginia Sen. Kaine, who have received little attention in a race focused on Trump and Hillary Clinton, faced off for 90 minutes in the only vice presidential debate of the campaign.

With the close White House race perhaps starting to tip in Clinton’s favor, Pence outlined a detailed conservative agenda on tax policy, entitlements and immigration. He was markedly more prepared and more detailed in his answers than Trump was in last week’s first presidential debate. He was also more consistent in painting the Democratic ticket as career politicians unwilling to shake up Washington.

“Hillary Clinton and Tim Kaine want more of the same,” Pence said. He also repeatedly accused the Democrats of running an “insult-driven” campaign — an ironic attack line given that Trump has leveled repeated insults against Clinton and his former rivals in the Republican primaries.

There was a striking difference in the two men’s manner. Kaine, Clinton’s usually easygoing No. 2, went on the attack from the start, repeatedly interrupting and challenging Pence. Pence, an equally genial politician, was unflappable.

Kaine pressured Pence to answer for some of his running mate’s provocative statements. He also challenged Pence on Trump’s decision to break with decades of campaign tradition by not releasing his taxes.

“Donald Trump must give the American public his tax returns to show he’s prepared to be president, and he’s breaking his promise,” Kaine said.

Asked about reports that Trump might not have paid any federal taxes for years, Pence said his running mate “used the tax code just the way it’s supposed to be used, and he did it brilliantly.”

Records obtained by The New York Times showed Trump suffered more than $900 million in losses in 1995 that could have allowed him to avoid paying federal income taxes for as many as 18 years.

Kaine, too, defended his running mate’s weaknesses, chiefly the public’s questions about her honesty and trustworthiness. He said that while Trump was “selfish,” Clinton had devoted her career to helping children and families.

Social issues were a bigger part of the conversation than in the first presidential showdown, reflecting both candidates’ religious faith.

“The weak and feckless foreign policy of Hillary Clinton and Barack Obama has awaked an aggression in Russia that first appeared in Russia a few years ago,” Pence said. “All the while, all we do is fold our arms and say we’re not having talks anymore.”

On criminal justice, Kaine argued that Trump’s embrace of “stop and frisk” style policing was a mistake. Pence argued that Clinton has used police shootings to argue that there is “implicit bias” in police departments, and he said the Democrats should “stop seizing on these moments of tragedy.”

Kaine quickly shot back: “I can’t believe you are defending the position that there’s no bias.”

Tuesday’s contest was the only time Kaine and Pence will face off in this election, while Trump and Clinton tangle in three contests.

Clinton was widely viewed as the winner of her opening debate with Trump, rattling the real estate mogul with jabs about his business record and demeaning statements about women, and responding to his attacks with calm rejoinders. New public opinion polls have showed her improving her standing in nearly all battleground states.

While Trump has five weeks until Election Day to regain his footing, early voting is already underway in some states.

The vice presidential showdown at Virginia’s Longwood University was moderated by Elaine Quijano of CBS News.