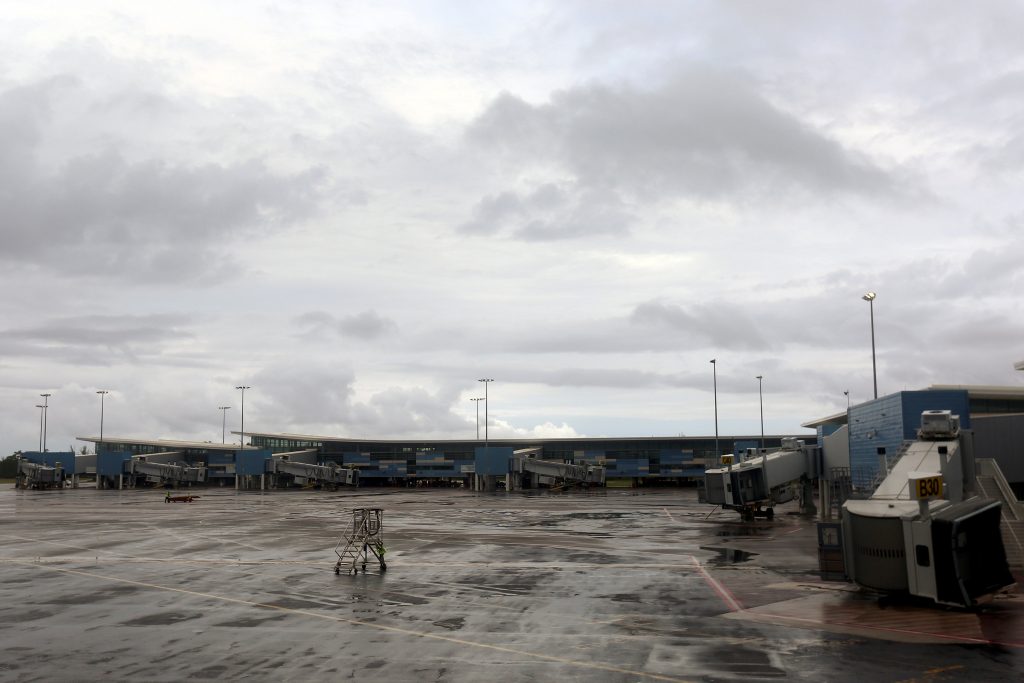 American Airlines has canceled all Thursday flights into three Florida airports — Miami International, Fort Lauderdale-Hollywood International and Palm Beach International — in anticipation of Hurricane Matthew, which forecasters expect to be very close to the east coast of the state by Thursday evening.

In additional, the airline announced all flights into and out of Orlando International Airport will be canceled after 5:30 p.m. eastern time on Thursday as well. Airline officials said travelers will be able to re-book their tickets without fees.

American’s announcement is another sign of how seriously officials are taking the approach of Hurricane Matthew, which is already being blamed for at least 11 deaths in Haiti and the Dominican Republic.

“If Matthew directly impacts Florida, there will be massive destruction that we haven’t seen in years,” Gov. Rick Scott, R, said during a news conference. Forecasters are warning of “life-threatening” flooding along the state’s eastern coast.

President Barack Obama had been scheduled to visit Florida for two events Wednesday, but he scrapped that trip due to the storm. Instead, he attended a briefing at the Federal Emergency Management Agency, according to the White House. He warned that the storm “could have a devastating effect” even in areas spared the full force of the hurricane, and asked residents to pay attention to local leaders and follow evacuation orders.

American Airlines, along with its regional partners canceled approximately 75 flights Wednesday. Thursday’s cancelations are expected to impact 525 flights Thursday. The airline anticipates it may be able to resume limited operations at some Florida airports, but anticipates that 275 flights on Friday will be canceled. A spokeswoman with United Airlines said they anticipate cancelling roughly 60 flights in and out of Miami, Fort Lauderdale and Palm Beach airports from Wednesday through Friday.

Several other U.S. carriers announced that would waive change fees in anticipation of the hurricane. Delta and JetBlue said they were allowing people to change flights scheduled in the coming days through much of the Southeast U.S. as well as the Bahamas and Caribbean.

Here is how Hurricane Matthew is expected to impact American Airline’s operations:

All flights scheduled to arrive MIA, FLL and/or PBI Thursday, Oct. 6 have been canceled.

American will have limited departures prior to 12 p.m. ET, Oct. 6. All departures after 12 p.m. ET have been canceled.

American plans to resume a reduced operation at 8 a.m. ET, Friday, Oct. 7. A full operation is anticipated by 12 p.m. ET.

All operations will be canceled Oct 7.

American will have limited operations the morning of Oct. 7.

All flights to/from Jacksonville will be canceled the remainder of the day.

Airlines officials said the resumption of service will depend on weather conditions at the affected airports as well as the hurricane’s impact on public transit and area roadways.