India Carries Out ‘Surgical Strikes’ Against Pakistan After Kashmir Attack

The Indian military said Thursday that it had carried out strikes against bases inside Pakistani-controlled Kashmir, escalating tensions between the nuclear-armed neighbors.

The operation came in response to the Sept. 18 raid on an army base in the disputed Kashmir territory that killed 18 Indian soldiers, which India blamed on Pakistan-based terrorists.

Lt. Gen Ranbir Singh, director of military operations, said the “surgical strikes” were carried out overnight against bases along the Line of Control, the boundary separating Indian- and Pakistani-controlled Kashmir.

Singh said the Indian army received information that bases would be used by terrorists to stage attacks inside India.

“The operations were focused on ensuring that terrorists do not succeed in their design to cause destruction and endanger the lives of our citizens,” Singh said.

Pakistan said two of its soldiers were killed in “unprovoked and naked aggression” by India, but denied that the attacks were surgical strikes. Instead, it characterized them as routine arms fire that each nation accuses the other of carrying out across the heavily militarized border. 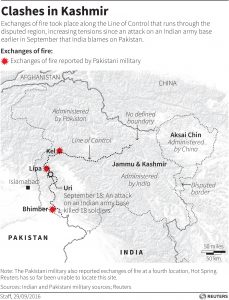 India and Pakistan have fought two wars over Kashmir, the Himalayan territory that both countries claim in its entirety.

Since the Sept. 18 raid on an army brigade headquarters, the deadliest attack against the Indian military in more than a decade, tensions between India and Pakistan have risen sharply. Pakistan denied involvement in the raid, while India and its allies withdrew from a regional summit planned for Islamabad in November, forcing the summit to be canceled.

Indian news media reported that villages along the Pakistani border in Jammu and Kashmir and the neighboring state of Punjab were evacuated as a precaution in case of retaliatory action from Pakistan.

India has carried out such cross-border attacks before, but usually in secret. Thursday’s announcement seemed designed to placate calls within India for a military response, and came as international opinion appeared to line up against Pakistan.

On Wednesday, the White House released a statement calling on Pakistan to “take effective action to combat and delegitimize United Nations-designated terrorist individuals and entities.” Those groups include Jaish-e-Muhammad, a Pakistan-based Islamist group that India blames for numerous attacks.