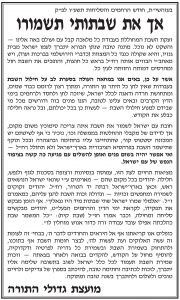 The Moetzes Gedolei HaTorah of Agudas Yisrael in Eretz Yisrael convened Tuesday for a special session to discuss serious breaches in Shabbos observance and attempts to intervene in the independence of the chareidi education system. The meeting was attended by the Rebbes of Ger, Vizhnitz, Sanz, Slonim, Boyan, Seret-Vizhnitz, Modzhitz and Sadigura, shlita.

After the meeting, the Moetzes issued two Kol Korei proclamations, one on the subject of Shabbos observance and the other on the independence of chareidi education. The proclamations state unequivocally that members of the Knesset, public figures, educators and the broader chareidi public must be on guard to preserve these two issues.

On a third front, the Moetzes Gedolei HaTorah tasked the MKs of Agudas Yisrael to take action on the mounting housing crisis in the chareidi sector.

Likewise, the MKs described the efforts by elements in the Education Ministry and local authorities to interfere in chinuch issues that are at the core of Torah education, among them acceptance criteria for students and staff members and threats to administrators and principals to close their schools or withhold funding if those criteria are not waived.

The Moetzes instructed the MKs to insist on the preservation of the status quo so that Shabbos is not desecrated, and also publicized a kol korei expressing the cry of Shabbos.

The Gedolim express their pain and demand that the desecration be halted: “Therefore, we state our opposition … to the Shabbos desecration regarding work that has no heter from the Torah.… We hereby turn to all those who have the power to prevent Shabbos desecration – to do so with all their ability.

“The obligation of Am Yisrael to keep Shabbos does not need support from anywhere, but with regard to the decision-makers in the government, let us mention that by their own account, there is something called the ‘status quo’ that they pledged to uphold, declaring that Shabbos will be publicly preserved and will not be desecrated, R”l. It is inconceivable … to come to terms with a violation of something so dear to the Jewish nation.”

The kol korei concludes with a call to Am Yisrael to strengthen the boundaries of Shabbos as a zechus ahead of the upcoming Days of Judgment.

Regarding the independence of the chareidi education system, the Moetzes determined that no outside interference in curriculum content or acceptance of students or teachers must be allowed in the Torah school system. It also publicized a clear kol korei including instructions to those in charge of education to act independently and not take orders from outside authorities.

“…We reiterate and determine with the power of our holy Torah that the pedagogic and educational independence of the chareidi institutions is a vital condition for their success, according to the mesorah passed down for generations.

“The pattern of trying to violate or harm that independence, via the intervention of the Education Ministry, in content, teacher and student acceptance – in contravention to the decisions of the school administrators – threatens the chinuch … of the girls and boys.

“We express our opinion, Daas Torah, that it is incumbent upon administrators and parents to stand firm in the face of the attempts by the authorities to impose changes, chalilah, in the way that Bais Yaakov is managed, by tempting them with funding or threatening to withhold funding – and certainly not to be poretz geder with claims of parnassah and the like.”

The Moetzes also addressed those in charge of Torah chinuch: “… A heavy responsibility rests on their shoulders for the future of Kedushas Beis Yisrael, and they need to be strengthened to stand firm in the face of any foreign winds and not deviate in the slightest from what our Rebbes and Rabbanim, zy”a, have instructed in previous generations. We hereby set boundaries so that we can educate our children in the pure ways to establish Torah-true homes in Am Yisrael, with holiness, purity, ahavas Torah and Yiras Shamayim.”

There are six clear directives in the Kol Korei:

It was mentioned that the practical solution needs to be the option of renting apartments at low rates, because even a relatively cheap apartment is still far from what many young families can afford. The Moetzes asked the MKs to work on advancing practical solutions.

Rabbi Chaim Aharon Kaufman, director of Vaad Hayeshivos, also presented to the Moetzes the contacts that the Vaad Hayeshivos has had with the defense establishment and received instructions on how to proceed accordingly.