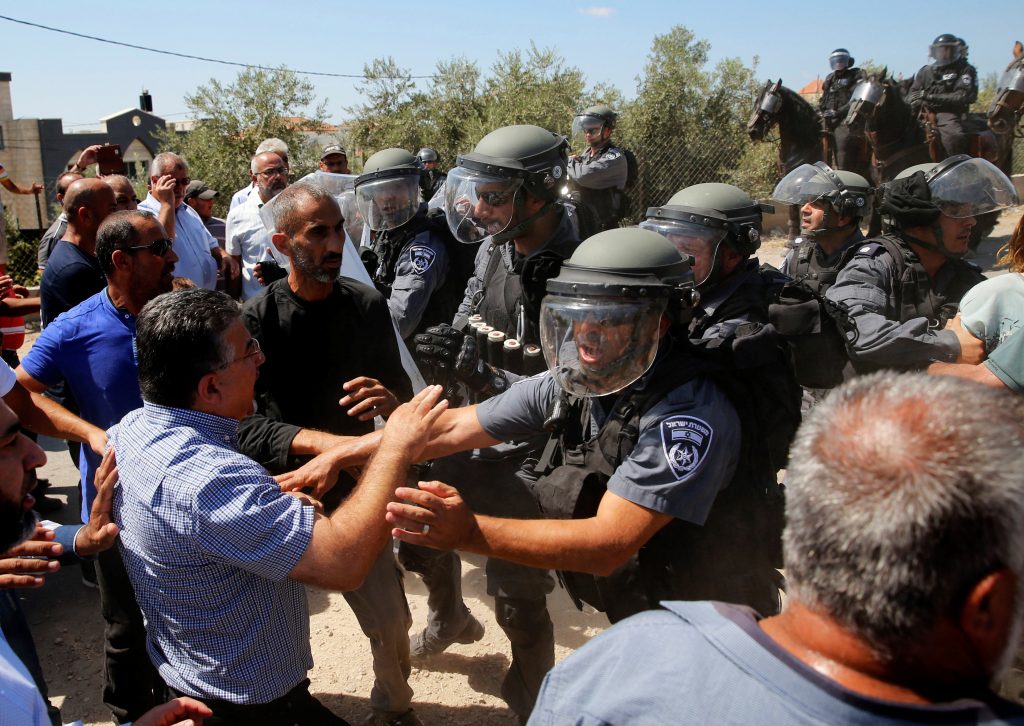 Two residents of the northern Arab village of Ar’ara were arrested Monday afternoon for rioting as a march organized by the right-wing Otzma Yehudit (Jewish Strength) group swept through the town. The march is a protest against what they said was the failure of the authorities in the aftermath of the attack by terrorist Nashat Melhem, who on January 1st of this year killed three Israelis in a shooting attack on a café in central Tel Aviv. During the course of his escape from the city, he managed to evade police for a full week before he was shot and killed in a showdown. Police arrested numerous people in Ar’ara for providing assistance to Melhem, where he lived, as he evaded police.

About 20 protesters marched through the town, with about 150 residents following them. The two groups were separated by dozens of border guards on horseback. Residents attempted several times to breach the police line, demanding that police remove the “provocateurs” who were “causing trouble for no purpose” – leading police to arrest two of them.

The march had a permit, which members of the group – attorney Itamar Ben Gvir and activists Baruch Marzel and Bentzi Gopstein – fought to acquire for over half a year, with Ben Gvir taking the case to the High Court and demanding that police grant a permit.

Police had refused to grant a permit, claiming that the march was “unsafe. In the past we have conducted numerous marches, such as in Umm el-Faham, and police found a way to work with us,” said Ben Gvir in a statement. “Although they claim that the march would be ‘controversial’ and ‘disturb public order,’ police have allowed many other similar marches that were just as controversial. It permitted the march of groups in Yerushalayim that were advocating undesirable lifestyles, Peace Now marches in Chevron, protests by feminist groups at the Kotel, and so on. It is the police that have established the policy of finding ways to allow these controversial groups to express their opinions, and yet now it seeks to change its long-standing policy.”

Speaking to Channel Two, residents said they did not understand the point of the march. “This is not a protest against Melhem, who is dead, or his family, but against the presence of Arabs in Israel. Those who permitted this intended to sow terror and hatred in an area that is usually quiet.”

Speaking at the rally, Ben Gvir said that the group was protesting the lack of loyalty by residents, evidenced by their actions in protecting Melhem – one of whose victims was an Israeli-Arab cab driver. “We want to make clear to those who helped Melhem that they are not wanted here,” he said.

Gopstein said, “We are not here to confront or fight, but we will not turn the other way if someone tries to hurt us. We Jews are the ones in charge of Israel, and residents of this village must learn that they must act in a loyal manner to the state if they wish to live here.”