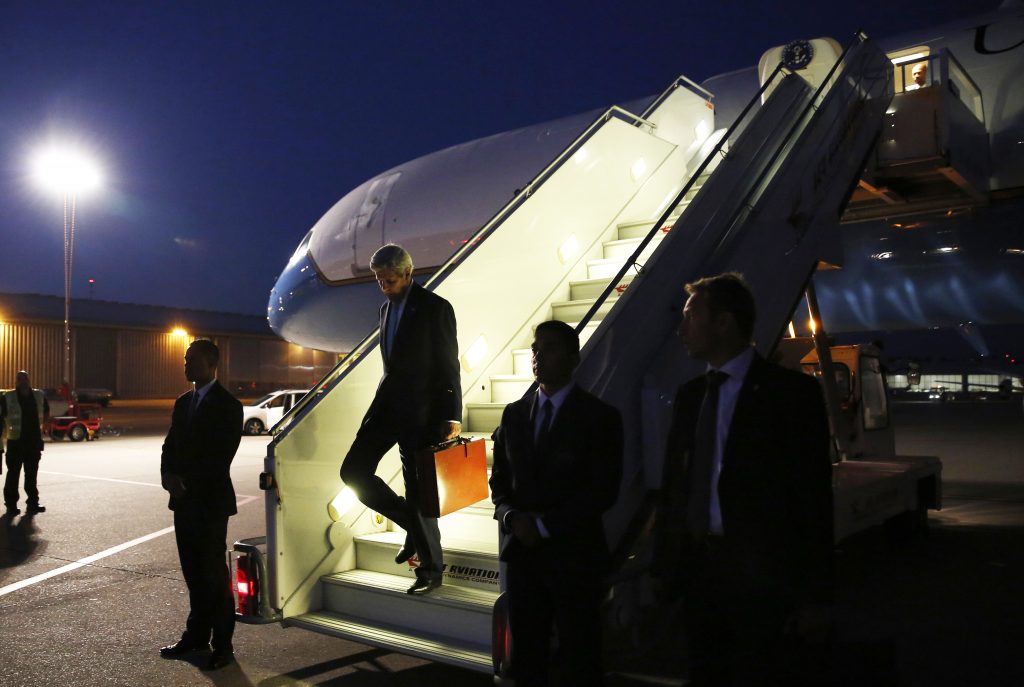 Senior U.S. officials on Friday played down hopes of an imminent cease-fire agreement for Syria as U.S. Secretary of State John Kerry arrived in Geneva for a fourth set of negotiations with his Russian counterpart in the last two weeks. Previously, officials suggested Kerry wouldn’t travel to the Swiss city unless a deal was clearly at hand.

The talks between Kerry and Russian Foreign Minister Sergey Lavrov aim to produce a nationwide cease-fire in Syria after more than five years of warfare and as many as 500,000 deaths. The talks hinge on an unlikely U.S.-Russian military partnership that would come into force if Moscow can pressure its ally, Syrian President Bashar Assad’s government, to halt offensive operations. Washington, meanwhile, would have to persuade the anti-Assad rebels it supports to end any coordination with al-Qaida and other terror groups.

Neither side has succeeded in doing its part despite months of diplomacy. And the task may be getting even more difficult as fighting rages around the divided city of Aleppo, Syria’s most populous city and the new focus of the conflict. Assad’s government appeared to tighten its siege of the former Syrian commercial hub on Thursday, following several gains over the weekend, which could make it harder for the U.S. and Russia to find a compromise that ends the fighting. Forty days of fighting in Aleppo has killed nearly 700 civilians, including 160 children, according to a Syrian human rights group.

The senior U.S. officials accompanying Kerry to Geneva said they couldn’t guarantee an agreement Friday and that more talks may be needed. Aleppo will be a large part of the day’s discussions, they said, along with the technical details of a cease-fire, defining everything from how far back from demilitarized areas combatants would have to stay to the types of weapons they would need to withdraw from front lines. The officials briefed reporters traveling on Kerry’s plane on condition they not be quoted by name.

Since Aug. 26, Kerry and Lavrov met once before in Geneva and twice in China on the sidelines of a global economic summit. They’ve also held a flurry of phone conversations in recent days. And both governments had said they were close to a package that would go beyond several previous truces between the Syrian government and armed opposition — all of which failed to hold. For Kerry, America’s top diplomat, securing a sustainable peace in Syria has become his biggest objective since last summer’s Iran nuclear deal.

“Our own goal is to try to settle the remaining issues that [prevent us from] reaching an agreement,” State Department spokesman Mark Toner said Thursday as Kerry weighed the trip to the lakeside Swiss city. “Once we feel like we’re closer to a settlement and a meeting would be valuable, then we’ll have that meeting.”

In addition to those killed, Syria’s conflict has chased millions of people from their homes, contributing to Europe’s worst refugee crisis since World War II. Amid the chaos of fighting between Syria’s Russian-backed government and U.S.-supported rebels, the Islamic State group has emerged as a global terror threat.

Russia’s military intervention last year has shored up Assad’s position against the variety of militant groups he is facing. Although Russia claims to be targeting IS and the Nusra Front, al-Qaida’s Syria affiliate, the Obama administration says the majority of its air strikes have hit “moderate” rebels backed by the United States and its Arab partners. Russia has been keen to unify its counterterror campaign with that of the United States, but up to now Washington has held back.

Kerry’s offer includes intelligence sharing and joint targeting coordination. In exchange for getting Assad’s air forces out of the skies, the U.S. and Russia would work together to identify acceptable targets and then approve strikes. The idea of such cooperation, however, has prompted significant skepticism from powerful members of the U.S. national security establishment in Washington.

In a speech this week in Britain, U.S. Defense Secretary Ash Carter accused Russia of sowing seeds of global instability and questioned whether Moscow genuinely wants a viable cease-fire in Syria. Russia’s support for Assad, he said, “has made the situation in Syria more dangerous, more prolonged and more violent.”

U.S. National Intelligence Director James Clapper has been another vocal opponent of any enhanced U.S.-Russian coordination.

“These are difficult processes,” Toner told reporters. “The Russians have conditions they want to see met and addressed; we have our own. And in reaching our own consensus … we continue to have those conversations. We’re just not there yet.”