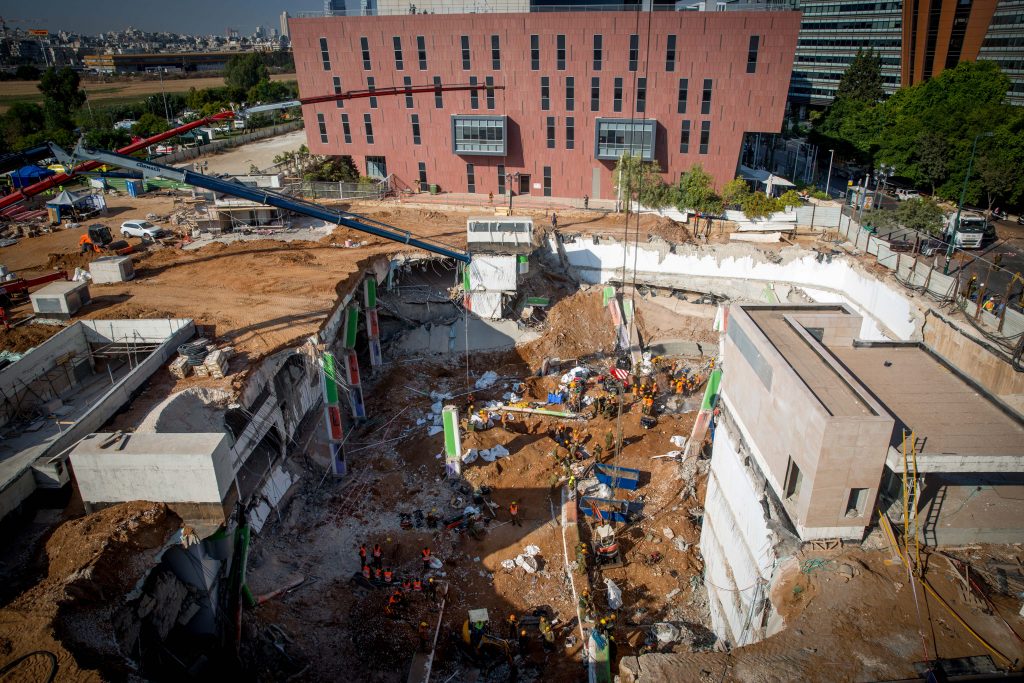 The question of responsibility for Monday’s building disaster in Tel Aviv hung in the air on Wednesday as a police investigation continued which reportedly has focused on a structural flaw rather than negligence in on-site management of the construction.

In the real estate industry’s annual Dun’s 100 conference, the finger of blame was pointed at the state for not providing for adequate inspection of construction sites.

“Only the state can ruin the quality of construction in Israel,” declared developer Yigal Dimri at the gathering organized by Globes. “Where the contractors are concerned, the situation is not so bad. The builders themselves arrange for inspection. Each contractor is responsible for taking care of it himself. There’s no way around it; it’s a dangerous business, and people will die in the future, too. We contractors try to prevent disasters, and are doing everything to reduce them. It’s a big pity that the state in which people pay such high taxes employs only 17 safety inspectors, instead of a thousand”.

Real Estate Appraisers Association in Israel chairman Ehud Danus concurred: “In general, the sector is well managed. The quality of construction may be poorer than it was a decade ago, but accusations should be directed against the state, not the contractors.”

However, architect Moshe Zur said that cost-cutting in the sector is wrong. “The question of quality, mainly in construction for public entities, is not assigned the same weight as the price. Quality is regarded as a decoration; a low mark is assigned to quality, and a high one to price. The result is poorer design and construction. People don’t realize that in the end, quality is worth money.”

Meanwhile, the investigation revealed that the collapse of the parking garage occurred a few seconds after a tractor was driven up to the roof of the structure, Ynet reported.

The driver, Abed a-Said, sustained minor injuries and was released from the hospital on Tuesday. He blacked out briefly at the time and said that doesn’t remember anything of the collapse itself.

“I woke up in the driver’s seat in the tractor and saw the Magen David Adom paramedics,” he said. “They asked if I was okay, but nothing was okay. I was stunned, my entire body hurt and I thought I was in a dream.”

He said that prior to the collapse he was unaware of any structural problem. “If it were dangerous, I wouldn’t have worked there,” he said. ” I did what my superior told me, I’m not an engineer.”