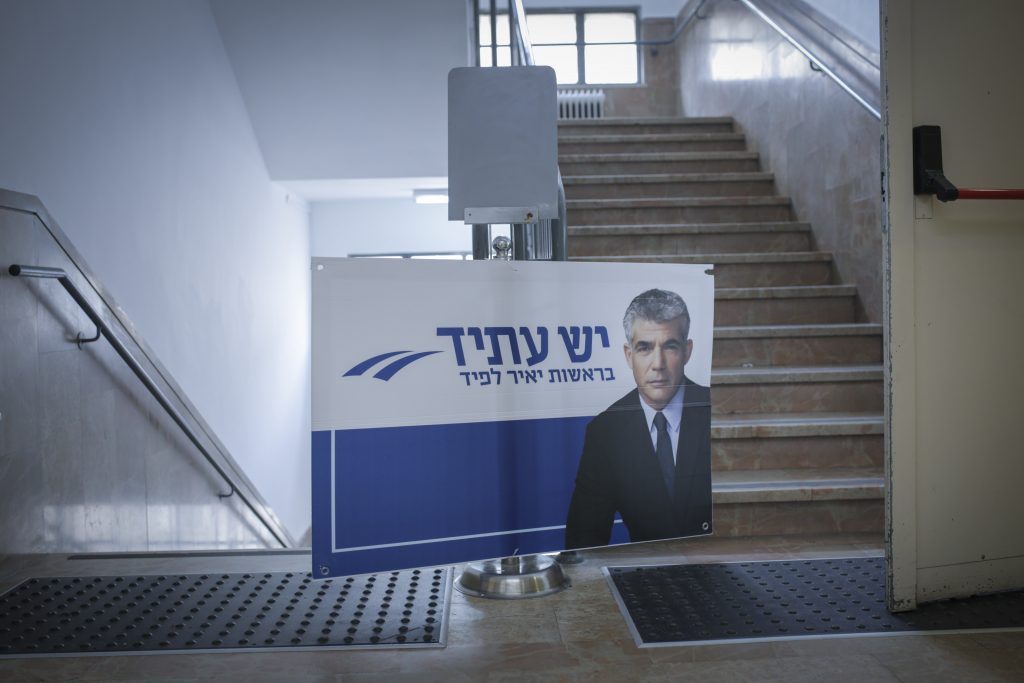 Likud MKs responded with dismay to a poll by Channel Two, which for the first time shows Yair Lapid’s Yesh Atid pulling ahead of the Likud in national elections. Sources in the party blamed the result on the recent “Shabbos work crisis” at Israel Railways, in which the government was embroiled over whether or not it supported allowing work on railway infrastructure on the holy day.

“With the ruling of the High Court Tuesday that Prime Minister Binyamin Netanyahu is not authorized to get involved in this matter, the issue as far as he is concerned is closed,” sources in the Likud told Channel Two. “The person responsible is Labor and Welfare Minister Chaim Katz, and he has already announced that Shabbos work permits will be distributed only on the basis of a ‘great need.’” At a press conference in Holland, Netanyahu said Tuesday night that he saw Katz as solely responsible for the work permits, and that “the decision would be made based on needs presented to him.”

And if the poll reflected accusations that Netanyahu had somehow “surrendered” to the chareidim on the issue of Shabbos, “it should be kept in mind that the left, from the days of Yitzchak Rabin through Ehud Barak and Ehud Olmert all had coalitions in which chareidi parties played a prominent role. Even Lapid in recent weeks has ‘repented’ and attempted to signal to chareidim that he is not their enemy,” and there is reason to believe that he, too, would seek to include them in a coalition he headed if his party was indeed the largest in the Knesset.

In the poll, Yesh Atid scored 24 Knesset seats, with the Likud coming in second with 22. Naftali Bennett’s Jewish Home would get 14 seats if elections were held now, the poll showed, with Zionist Camp tied with the United Arab List at 13 seats for fourth largest. The list is finished out with Yisrael Beteinu’s 10 seats, 7 for United Torah Judaism and 6 for Shas, 6 for Kulanu and 5 for Meretz. If the Knesset elections indeed followed that pattern, neither Yesh Atid nor Likud would be able to form a coalition without Shas and UTJ, assuming neither would be willing to include the Arabs in their government.

According to the poll, Zionist Camp has lost half its voters to Yesh Atid, while a quarter of the Likud’s voters have moved to support Jewish Home. These trends have been growing for months, the poll said, and if the recent Shabbos crisis exacerbated them, the polls could eventually have looked like this even if the crisis had not arisen.

One wild card in a future election is the participation of a list headed by former Defense Minister Moshe Yaalon, who is said to be seeking to form a party that would contend in the next elections. If Yaalon does run, a list headed by him would garner seven seats, coming at the expense of both Likud and Yesh Atid – which tie for 21 seats each in that scenario – and of Zionist Camp, which drops to 10 seats. Jewish Home, UAL and Yisrael Beytenu remain unchanged.

Coalition chairman MK David Bitan said that the poll results were “unacceptable. We have other polls taken over the past week that shows the Likud significantly ahead. We are not worried. The recent tensions and our activities in security, social, and infrastructure issues show off Netanyahu’s leadership, and the polls will continue to reflect that. We will also solve the train issue in a manner that will ensure that the work gets done and the riding public is able to enjoy train service.”