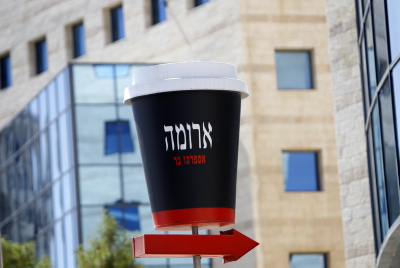 The popular Aroma coffee shop chain has recalled two of its popular drinks out of concern that some of the ingredients may have been contaminated with listeria, reports said. According to Maariv, the company has recalled two coconut-lychee iced drinks after discovering listeria in some samples.

The bacteria was discovered in a routine inspection by an outside company that is licensed by the Health Ministry to undertake such tests. A notification went out immediately to managers in all 140 Aroma branches throughout the country to immediately stop selling the drinks.

The company has not opened a special hotline for customers who bought the product, because it is assumed that anyone buying the drink would have consumed it immediately and not brought it home to drink later. In a statement, Aroma confirmed the report, saying that the company hoped to restore its full menu in the coming days.

The Health Ministry said that it had dispatched a team to supervise the cleanup of the facility where the drinks are brewed, and was satisfied with the level of cooperation by the coffee shop chain on the matter.

Despite the wave of recalls of food products for contamination by salmonella, listeria and other pathogens – there have been dozens in recent weeks since the original incident reported nearly a month ago in connection with Telma cornflakes – the number of people actually infected with a food-borne disease has actually been on a downward trend in recent months.

The Health Ministry’s latest report on infections of the digestive system – which includes cases of food-borne illnesses treated in hospitals – has been falling throughout the past three months. “Community health centers and health-fund offices are [also seeing] falling [numbers], with fewer people seeking treatment for these conditions,” the report said. “We also see fewer cases and admissions in hospitals for such diseases.”