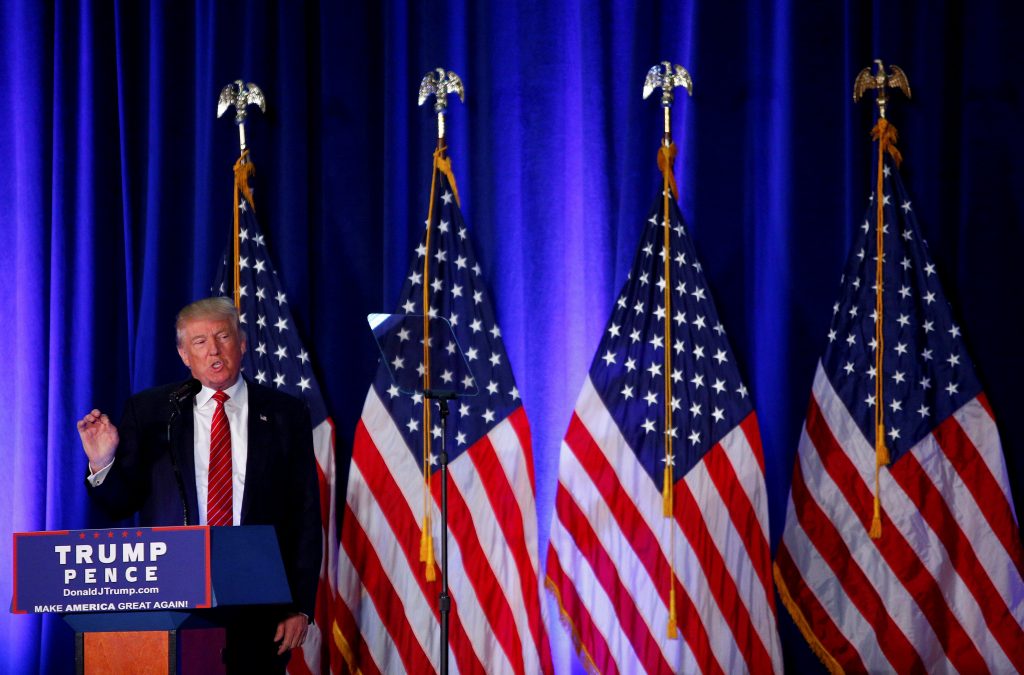 “Those who do not believe in our Constitution, or who support bigotry and hatred, will not be admitted for immigration into our country,” Trump said in a foreign policy address in Youngstown, Ohio. “Only those who we expect to flourish in our country — and to embrace a tolerant American society — should be issued visas.”

Trump’s proposals were the latest version of a policy that began with his unprecedented call to temporarily bar foreign Muslims from entering the country — a religious test that was criticized across party lines as un-American.

The Republican nominee has made stricter immigration measures a central part of his proposals for defeating the Islamic State, a battle he said Monday is akin to the Cold War struggle against communism. He called for parents, teachers and others to promote “American culture” and encouraged “assimilation.”

Trump’s address comes during a trying stretch for his presidential campaign. He’s struggled to stay on message and build a consistent case against Democrat Hillary Clinton, repeatedly roiling the White House race with provocative comments that have deeply frustrated many in his own party.

Clinton has seized on Republican concerns about Trump, highlighting the steady stream of GOP national security experts who say their party’s nominee is unfit to serve as commander in chief. She kept up that argument Monday as she campaigned alongside Vice President Joe Biden in Scranton, Pennsylvania, a working class area where both have family ties.

“The threat to their life has gone up a couple clicks,” Biden said.

Trump has since said he was being sarcastic in accusing Obama of founding IS. Still, he directly blamed the president and Clinton, who served as secretary of state, for backing policies that “unleashed” the group, including withdrawing U.S. troops from Iraq in late 2011.

He also challenged Clinton’s fitness to be president, declaring she lacks the “mental and physical stamina” to take on the Islamic State.

Trump was vague about what he would do differently to decimate IS in its strongholds in Iraq and Syria. He vowed to partner with any country that shares his goal of defeating the extremist group, regardless of other strategic disagreements, and named Russia as a nation he would like to improve relations with.

Russia and the U.S. have been discussing greater coordination in Syria, where IS is part of a volatile mix of groups fighting for power. But they have been unable to reach an agreement on which terrorist groups could be targeted.

Trump also vowed to end “our current strategy of nation-building and regime change” — a criticism that extends to policies of both parties. He panned the long, expensive Iraq War started under Republican President George W. Bush, as well as Obama’s calls for new leadership in some Middle East countries during the pro-democracy Arab Spring uprisings.

Obama has held up Bush’s years-long commitment to setting up and securing a new government in Iraq after the initial invasion as a reason to avoid U.S. military intervention in countries like Syria.

Trump’s most specific anti-Islamic State proposals centered on keeping those seeking to carry out attacks in the West from entering the United States. He said attacks involving “immigrants or the children of immigrants” underscore the need to implement “extreme vetting.”

Trump aides said the government would use questionnaires, social media, interview with family and friends or other means to vet applicants’ stances on issues, including religious freedom and gender equality. Trump did not clarify how U.S. officials would assess the veracity of responses to the questionnaires or how much manpower it would require to complete such arduous vetting.

He did say that implementing the policy overhaul would require a temporary halt in immigration from “the most dangerous and volatile regions of the world that have a history of exporting terrorism.” He did not identify those regions, saying instead that he would ask the State Department and the Department of Homeland Security to do so once he is elected.

“We will stop processing visas from those areas until such time as it is deemed safe to resume based on new circumstances or new procedures,” Trump said.

Trump’s first announced his call for banning Muslims last year during the GOP primary. He introduced a new standard following the June massacre at a club in Orlando, vowing to “suspend immigration from areas of the world where there is a proven history of terrorism against the United States, Europe or our allies, until we fully understand how to end these threats.”

That proposal raised numerous questions that the campaign never clarified, including whether it would apply to citizens of countries like France, Israel, or Ireland, which have suffered recent and past attacks.

Trump had promised to release his list of “terror countries” soon. His announcement Monday that government agencies would create the list appeared to indicate that would not happen before the November election.