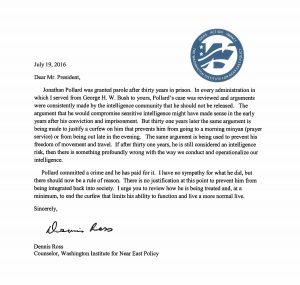 In a dramatic development, Dennis B. Ross, who served in key positions in five consecutive U.S. administrations, has written a letter to President Obama urging him to rescind Jonathan Pollard’s harsh parole restrictions. Most recently, Ross was a member of President Obama’s National Security Council, serving as a special assistant to the president with overall responsibility for the Central Region, which includes the Middle East, the Persian Gulf, Afghanistan, Pakistan and South Asia. Ross is currently a counselor and distinguished fellow at the Washington Institute for Near East Policy.

Pollard, who was released on parole in November after serving thirty years of an unprecedented life sentence in prison for passing classified information to Israel, a close U.S. ally, is battling unusually harsh restrictions, which include a 7:00 p.m. to 7:00 a.m. curfew and the unfettered monitoring and inspection of his computers, in addition to those of any employer who chooses to hire him.

Pollard is also currently required to wear a GPS monitoring system that consists of a non-removable transmitter installed on his wrist, and a receiver that is plugged into an outlet in his residence. Whenever he moves outside the range of the receiver, the transmitter — which is three inches long and two inches wide — acts as a GPS tracker and monitors his location. Were Pollard to step out of his tiny studio apartment to daven with a minyan or get some fresh air on Shabbos or Yom Tov, the battery would begin to drain, forcing him to choose between violating Shabbos or facing re-arrest.

“The argument that he would compromise sensitive intelligence might have made sense in the early years after [Pollard’s] conviction and imprisonment,” Ross says in the letter. “But thirty-one years later, the same argument is being made to justify a curfew on him that prevents him from going to a morning minyan (prayer service) or from being out late in the evening. The same argument is being used to prevent his freedom of travel. If after thirty-one years, he is still considered an intelligence risk, then there is something profoundly wrong with the way we conduct and operationalize our intelligence.

“There is no justification at this point to prevent him from being integrated back into society,” Ross says. “I urge you to review how he is being treated, and at a minimum, to end the curfew that limits his ability to function and live a more normal life.”

“The importance of this letter can’t be overstated,” a legal observer who has been following the Pollard case closely for more than two decades, told Hamodia on Friday. The observer requested anonymity due to the sensitivity of the case.

“Dennis Ross was a key player in the Middle East peace talks under both the Clinton and Obama administrations,” says the observer. “He has firsthand knowledge of how Pollard was repeatedly used as a bargaining chip and how successive administrations were so convinced that Pollard didn’t have any secrets to share that they were ready to send Pollard to Israel in exchange for Israeli concessions.” 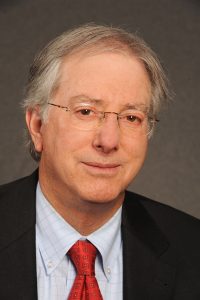 In his 2004 book, Ross wrote how he urged Clinton not to free Pollard as part of the 1998 Wye River Israeli-Palestinian Accords.

“It would be a huge payoff for Bibi; you don’t have many like this in your pocket. I would save it for permanent status. You will need it later, don’t use it now,” Ross told Clinton.

Ross recalls that he told Clinton at that time that he was in favor of releasing Pollard, because he had received a harsher sentence than others who had committed comparable crimes.

“I preferred not tying his release to any agreement, but if that was what we were going to do, then I favored saving it for permanent status,” he wrote.

In April 2014, when President Obama seemed prepared to release Pollard as part of a deal with Israel intended to breathe life into the Mideast peace process, Ross wrote an Op-Ed for Time Magazine, saying that releasing Pollard seemed justified.

“Perhaps, five or even 10 years after his imprisonment he might still know things about our intelligence that could have some value, but nearly 30 years afterwards, what could still be of relevance? During one discussion I had in the Clinton administration when this came up, I said even then — at a point when Pollard had been in prison for 13 years — that if he could still compromise our intelligence, those responsible on our side should be fired. They had a responsibility to change the way we did business. Clearly, we altered our techniques and means when our security was compromised and we had suffered other security breaches and had to imprison other spies,” Ross wrote.

The existence of the letter was first reported by The Jerusalem Post, which printed excerpts of it.

Hamodia was subsequently able to obtain the actual letter.