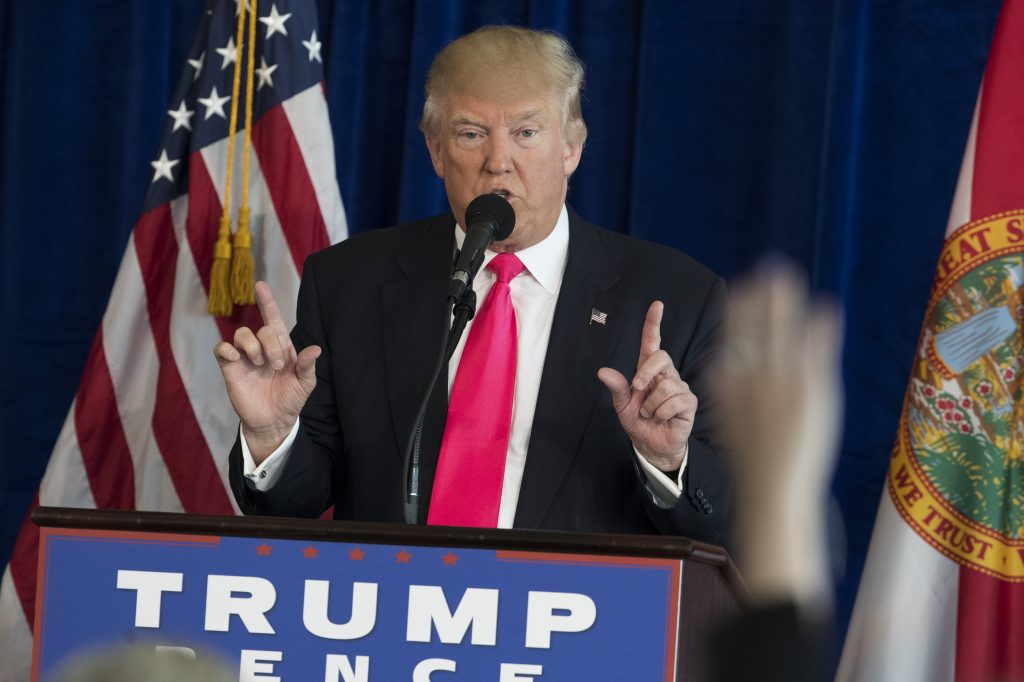 In a surprising call for a foreign power to use its hacking abilities to get involved in the U.S. presidential election, Donald Trump on Wednesday called on Russia to find Hillary Clinton’s missing emails from the time she was secretary of state.

“Russia, if you’re listening, I hope you’re able to find the 30,000 emails that are missing,” Trump said to a room of TV cameras at Trump National Doral. “I think you will probably be rewarded mightily by our press.”

Trump also deflected accusations from the Clinton campaign that Russia hacked into the Democratic National Committee emails, which were made public on Friday, to help the Republican nominee.

The Clinton campaign was quick to respond. Said adviser Jake Sullivan: “This has to be the first time that a major presidential candidate has actively encouraged a foreign power to conduct espionage against his political opponent. That’s not hyperbole, those are just the facts. This has gone from being a matter of curiosity, and a matter of politics, to being a national security issue.”

Trump spoke briefly, and then took questions for nearly an hour on a long list of topics including Russia, his positions on immigration, trade and Israel. But the most provocative portions related to Russia, Clinton and former Democratic Party chair U.S. Rep. Debbie Wasserman Schultz of Florida, who stepped down from her post Sunday.

Referring to questions about whether he could have been the hacker, Trump said: “It’s so far-fetched. It’s so ridiculous. Honestly I wish I had that power. I’d love to have that power.”

Vice presidential candidate Mike Pence issued a statement Wednesday morning saying that the FBI will get to the bottom of who is behind the hacking.

“If it is Russia and they are interfering in our elections, I can assure you both parties and the United States government will ensure there are serious consequences,” he said. “That said, the Democrats singularly focusing on who might be behind it and not addressing the basic fact that they’ve been exposed as a party who not only rigs the government, but rigs elections while literally accepting cash for federal appointments is outrageous. The American people now have absolute and further proof of the corruption that exists around Hillary Clinton. It should disqualify her from office, if the media did their job.”

Trump attacked Clinton and the Democratic leadership at the news conference.

“It’s been 235 days since crooked Hillary Clinton has had a press conference,” he said.

He also bashed Wasserman Schultz, who stepped down Sunday. Trump said she stacked the deck against Bernie Sanders.

“She totally rigged it,” he said.

Trump said that in the next few weeks he will release plans related to immigration and said that his poll numbers showed increased Hispanic support.

“I’ve been doing very well with the Hispanic community,” he said.

Trump continued bashing Clinton and linking her to Wasserman Schultz, who stepped down after thousands of DNC emails showed the party favored Clinton over Sanders.

“It was about the things that were said in those e-mails. They were terrible things. Talking about Jewish. Talking about race … .It was Debbie Wasserman Schultz and believe me as sure as you’re sitting there Hillary Clinton knew about it … . Debbie Wasserman Schultz couldn’t breathe without speaking and getting approval from Clinton … . It was a rigged race. It was totally rigged.”

Trump faced a few questions related to the deaths of black men at the hands of police, including in Louisiana and Minnesota. Trump defended law enforcement.

“If the police do 100,000 great jobs and they have one either rogue police man or a cop was poorly trained or did a bad job you see that incident on media for weeks,” Trump said. “You don’t see the good work they do. You see one mistake they make out of 100,000, it’s on media night after night after night.”

Trump faced several questions about whether he has ties to Russia — which he denied — and his relationship with Vladimir Putin.

Trump bashed President Barack Obama as “the most ignorant president in our history” and accused the press of siding with Clinton.

When a female reporter asked Trump whether he was encouraging Russia to hack into emails, Trump snapped back: “Be quiet. I know you want to save her,” a reference to Clinton.