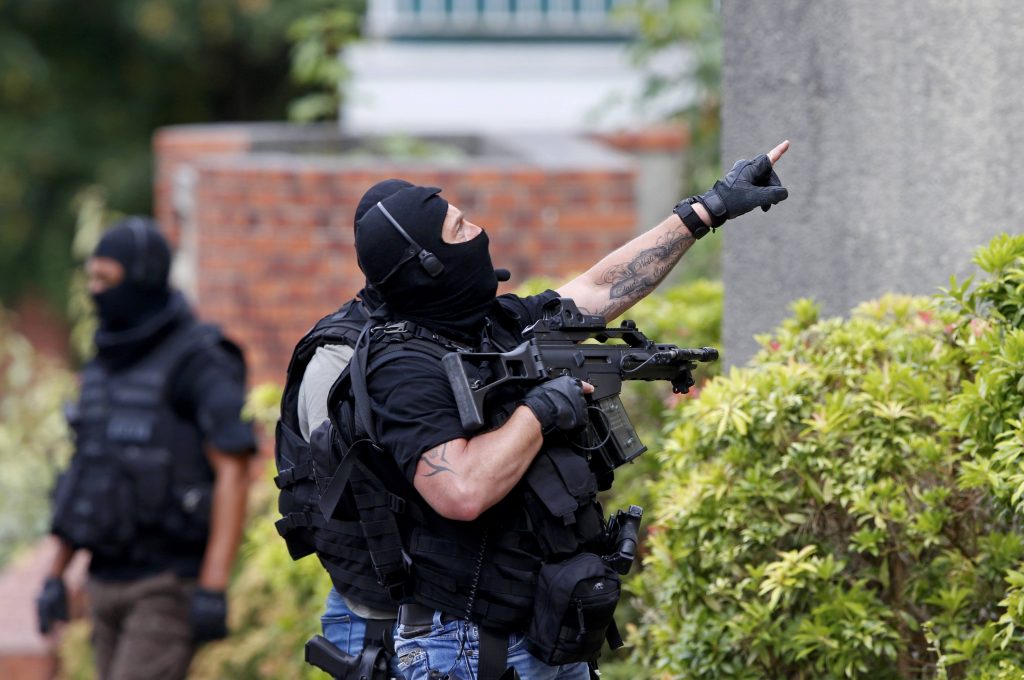 Terrorists loyal to Islamic State forced an elderly priest to his knees before slitting his throat and took several worshippers hostage in a French church on Tuesday before police shot the terrorists dead.

It was the latest in a wave of attacks in Europe inspired by the IS terror group, which is based in Iraq and Syria that is on the defensive against a U.S.-led military coalition in which France is a major partner.

The assailants entered the church during the morning near the northern city of Rouen, northwest of Paris, killing Father Jacques Hamel, an 85-year-old parish priest, and taking four other people hostage, one of whom was seriously wounded.

“They forced him to his knees and he tried to defend himself and that’s when the drama began,” Sister Danielle, who escaped as the terrorists slew the priest, told RMC radio.

“They filmed themselves. It was like a sermon in Arabic around the altar,” the nun added.

Police shot the terrorists dead as they emerged from the church in the Normandy town of Saint-Etienne-du-Rouvray.

Speaking at the scene of the attack, President Francois Hollande said Islamic State had declared war on France, which should “use all its means” within the law to fight the group. “The threat remains very high,” Hollande said.

The president called it a “dreadful terrorist attack” and told reporters the attackers had pledged allegiance to Islamic State, against which France has launched airstrikes in Syria and Iraq. News agency Amaq, which is affiliated with Islamic State, said two of its “soldiers” were involved.

The White House condemned the attack and commended the French police for their “quick and decisive response.”

The attack was the latest in a string of deadly attacks in Europe including the mass killing in Nice, southern France, on Bastille Day 12 days ago and four incidents in Germany, most recently a suicide bombing at a concert in Ansbach on Sunday.

IS has called on its supporters to take action with any available weapons targeting countries it has been fighting.

The anti-terrorist unit of the Paris prosecutor’s office is investigating the attack. Police said one person had been arrested.

Several French media reported that one of the terrorists was a local man who had spent a year in jail on his return from Turkey after being intercepted trying to travel to Syria, but had been freed on bail with an electronic tag pending trial for alleged terrorism offences.

The prosecutor’s office said the identification of the two suspects was still underway and it was too early to jump to conclusions about a possible link.

Former president Nicolas Sarkozy, who is expected to enter a conservative primary soon for next year’s presidential election, jumped on the latest incident to accuse the Socialist government of being soft on terrorism.

“We must be merciless,” Sarkozy said in a statement to reporters. “The legal quibbling, precautions and pretexts for insufficient action are not acceptable. I demand that the government implement without delay the proposals we presented months ago. There is no more time to be wasted.”

The center-right opposition wants the government to put all Islamist suspects subject to a confidential security notice under administrative detention to avert potential attacks.

Far-right National Front leader Marine Le Pen, who is also expected to run for the presidency, said both major parties had failed on security. “All those who have governed us for 30 years bear an immense responsibility. It’s revolting to watch them bickering!” she said on Twitter.

Hollande insisted that the government must stick to the rule of law, which he said was the hallmark of a democracy.

Pope Francis condemned what he called a “barbarous killing.”

Vatican spokesman Father Federico Lombardi said that “the fact that this episode took place in a church,” in which a person of the cloth was killed in an attack involving Catholics, “is something that affects us profoundly.”

The attack heaped yet more pressure on Hollande to regain control of national security, with France already under a state of emergency 10 months ahead of a presidential election in which he is widely expected to seek a second term.

The Normandy attack came less than two weeks after a 31-year-old Tunisian, Mohamed Lahouaiej Bouhlel, ploughed his heavy goods truck into a crowd of revelers in the French Riviera city of Nice, killing 84 people. Islamic State claimed that attack.

“Everything is being done to trigger a war of religions,” tweeted Jean-Pierre Raffarin, a former conservative prime minister who now heads the Senate’s foreign affairs committee.

Hollande visited the Normandy town with Interior Minister Bernard Cazeneuve, meeting survivors of the church attack and members of the emergency services.

Cazeneuve has come under fire from conservative politicians for not doing enough to prevent the Nice attack, which prompted lawmakers to approve a six-month extension of emergency rule.