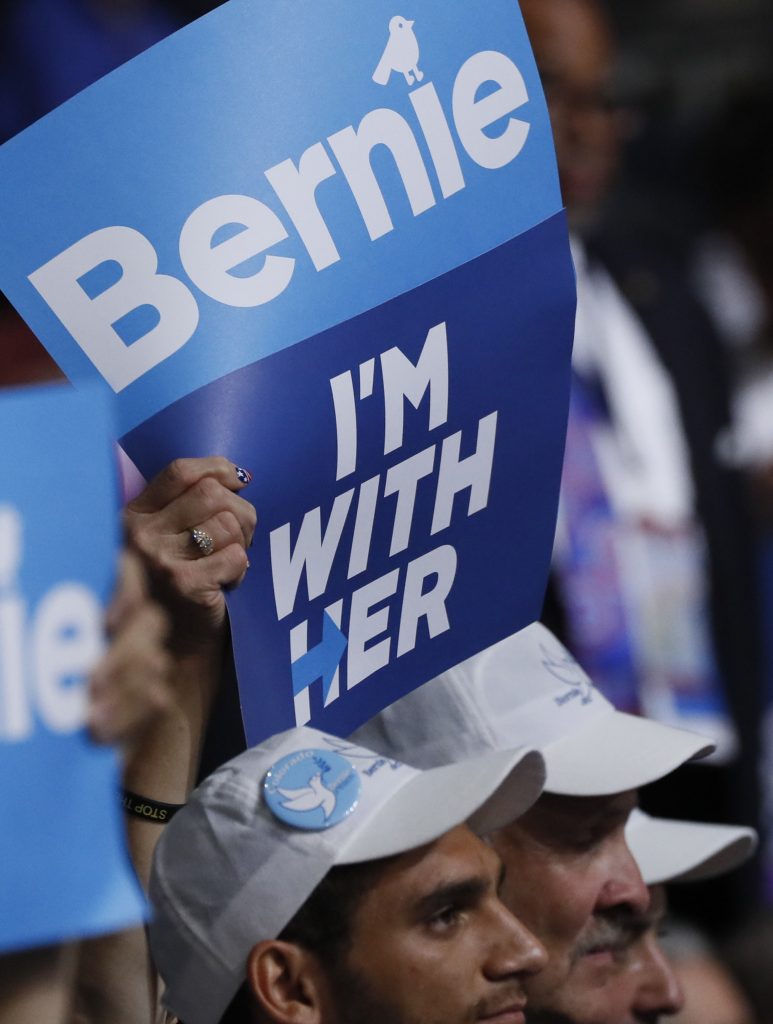 Hillary Clinton on Tuesday became the first woman to be nominated for president by a major political party on an historic night that her campaign is hoping will reintroduce her to voters still deeply skeptical of her candidacy.

During the roll call of states, Clinton garnered the 2,383 delegates needed to secure the Democratic nomination shortly after 6:30 p.m when the South Dakota delegation cast its votes.

In a bid to show party unity, Sen, Bernie Sanders, the runner-up for the nomination, was expected to make a motion to make Clinton the nominee by acclamation.

Speakers appearing later on the second night of the convention were scheduled to be offering testimonials about Clinton’s public service across a range of areas.

The program, billed as “Fights of Her Life,” appeared aimed at rehabilitating the image of a candidate with unusually high unfavorable ratings —— and deep-seated trust issues.

Speakers were set to talk about Clinton’s work for women and families, social justice, health care and global security, among other issues, her campaign said.

Sanders sat in the convention hall next to his wife, with a broad smile on his face, as a pair of seconding speeches followed. He stood up and waved to the crowd afterward amid an extended ovation.

Clinton was nominated by Sen. Barbara Mikulski (D-Md.), the dean of women senators, who said she was putting forward the former secretary of state’s name “on behalf of all the women who have broken down barriers.”

Mikulski was followed by Rep. John Lewis (D-Ga.), the revered civil rights leader; who referenced another “glass ceiling” that was broken with President Obama’s election eight years ago, and Na’ilah Amaru, a Clinton supporter and Iraq veteran who won an online contest to nominate the candidate.

With the speeches complete, the convention began the long and often colorful process of the state-by-state roll call vote.

When Illinois — Cinton’s birthplace — got its chance, the honor of casting votes was given to her childhood friend Betsy Ebeling.

“On this historic, wonderful day, in honor of Dorothy and Hugh’s daughter and my sweet friend — I know you’re watching,” Ebeling said, her voice heavy with emotion. “This one’s for you Hill.”

She called out Illinois’s 98 votes for Clinton and let out a final “Yes!”

The boos that had echoed in the Wells Fargo Center on Monday night were quieted as the count went on. It wasn’t because Sanders delegates — who had been unruly at times Monday — had suddenly been satisfied.

Several complained that they had been kept away from the microphones for fear that they would make scenes. Rumors of walk-outs in Sanders-heavy delegations ran rampant.

“If people want to make a statement with their feet, it’s one way of casting their vote,” said Sen. Jeff Merkley (D-Ore.), a Sanders supporter during the primaries. “But I hope they stay.”

Clinton’s campaign spent much of Tuesday in talks to give her vanquished opponent, Sanders, a symbolic role in the nomination process in a bid to heal rifts in the party.

Clinton campaign chairman John Podesta said earlier Tuesday that Democrats “need to move on” from infighting over the outcome of the primary, which saw Clinton soundly defeat challenger Sanders in both votes and delegates.

Sanders doubled-down on his support for Clinton Tuesday morning. Speaking at a breakfast meeting of the California delegation, he dismissed the boos of supporters and urged them to back her.

“It is easy to boo, but it is harder to look your kids in the face” if Trump becomes president because Democrats didn’t support the ticket, he said.

But at a morning breakfast hosted by Bloomberg Politics, Sanders expressed befuddlement at the idea that he would release his delegates before the roll call.

“Why would I do that?” Sanders asked. “There’s an election. We’re gonna lose, but if you were campaigning for me for six months or eight months and knocking your brains out, and the roll call came, who do you think you’d vote for? You’d vote for Bernie Sanders. That’s what I would do. And then, the other side gets more votes.”

He also confirmed on Tuesday that he will return to the Senate as an Independent, not a Democrat.

“I was elected as an Independent so I’ll stay two years more as an Independent,” he told reporters. As the longest serving Independent in U.S. congressional history, Sanders had only declared himself a Democrat when he entered the presidential race last year.

“A lot of people aren’t familiar with her accomplishments,” Mook told ABC noting that former president Bill Clinton will give the night’s big speech.

The former president is poised to address a Democratic convention as a political spouse for the first time. Clinton — who could soon become the country’s first “first man” — has been a Democratic convention staple for more than 40 years. His 1988 keynote address was widely panned as a meandering, boring speech, but his 1992 nomination acceptance speech buoyed his struggling campaign. In more recent years, the former president has served as a political character witness, most notably for Obama at his 2012 convention.

Hillary Clinton will not travel to Philadelphia to watch Bill Clinton’s address to the convention, but will instead watch the speech from her home in Chappaqua, NY, aides said. The candidate and her daughter, Chelsea, are scheduled to address the convention on Thursday.

While the former president headlines the evening, the convention is also set to hear from several others of the victims of gun violence or police-involved incidents, including Gwen Carr, the mother of Eric Garner, who died after being put in a chokehold by a New York City police officer in 2014; Sybrina Fulton, the mother of Trayvon Martin, who was fatally shot by a neighborhood watch volunteer in Sanford, Fla. in 2012; and Lesley McSpadden, the mother of Michael Brown, who was killed by a police officer in Ferguson, Mo., in 2014.

Gun control has become a leading issue of concern for Clinton, but speakers are also set to remind Democrats of her work on health-care reform as first lady and a senator and foreign affairs as secretary of state.

Wasserman Schultz also remained in Philadelphia, showing up Tuesday morning at a brunch hosted by lobbyist Heather Podesta and packed with lawmakers and top Democratic players. She attended at least two other events and a reception hosted by Donna Brazile, her interim successor.

At the Podesta event, Wasserman Schultz declined to be interviewed about the drama surrounding her, but stated unequivocally she was remaining in Philadelphia all week.