Germany On Edge After Unprecedented String of Attacks

Germany was put on edge after an unprecedented series of four attacks in the last week left many dead and wounded, placing pressure on German Chancellor Angela Merkel’s government to stem the violence.

The latest incident occurred late Sunday at a music festival in the Bavarian town of Ansbach, near Nuremberg, when a 27-year-old man identified as a Syrian refugee blew himself up near the entrance to the event, injuring 12 others.

The bombing followed a shooting spree at a shopping center in Munich on Friday, in which an 18-year-old man shot dead nine people before killing himself. The attacker, identified as an Iranian-German who was born and raised in Germany, had no apparent connection with a terror organization, police said. In another assault on Sunday, a machete-wielding 21-year-old male, also identified as Syrian refugee, killed a woman in a town south of Stuttgart. The woman was expecting. Last Monday, an ax assault by an Afghan asylum-seeker allegedly inspired by Islamic State wounded two train passengers near Wuerzburg.

Stephan Mayer, a lawmaker in Merkel’s Christian Democratic-led bloc, urged calm and warned against hasty judgments, particularly over the chancellor’s refugee policy, which triggered public anxiety after more than a million migrants made their way to Germany in 2015.

“There is a rising nervousness among our public,” Mayer, who sits on parliament’s internal affairs committee, told BBC Radio on Monday. “You have to differentiate — the events of Friday have nothing to do with our refugee policy. It is completely wrong to blame Angela Merkel and her refugee policy for this incident.” 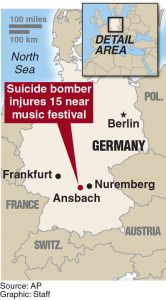 Germany has largely avoided large-scale terror attacks on its soil, in contrast with the assaults that killed hundreds in Paris, Brussels and Nice over the last year. While the spate of violence in Germany is smaller in scale, the incidents could revive pressure on Merkel over her migration policy as she struggles to confront a range of crises buffeting Europe.

Merkel convened an emergency meeting of her security cabinet on Saturday to address the violence and reassure the public. Anxieties over the influx of asylum seekers, the vast majority arriving through Bavaria, had subsided as numbers dwindled, the result of border closings along the Balkan route and a European Union accord with Turkey.

“We will find what exactly was behind this,” Merkel told reporters in the Chancellery on Saturday. “The state and its security forces will continue to do everything to protect the security and freedom of everybody in Germany.”

From the lone-wolf shooting at an Orlando club to the three terror attacks in France, Europe and the U.S. have been engulfed by waves of violence carried out by Islamic State sympathizers at a time when there is a populist backlash against immigrants and the political establishment, be it bureaucrats in the European Union or lawmakers in Washington. Republican presidential nominee Donald Trump called on NBC’s “Meet The Press” Sunday for “extreme vetting” for people entering the United States from countries hit by terror attacks, including European nations.

It remains unclear whether the suicide bomber in Bavaria has any links to terror organizations. The man, who had come to Germany two years ago and whose asylum application had been rejected, was known to police and had previously tried to kill himself, Bavarian Interior Minister Joachim Herrmann said at a news conference in the early hours of Monday.

German Interior Minister Thomas de Maiziere warned against broad judgments against refugees. He said authorities had investigated 59 allegations of migrants tied to terror groups, most of which have turned up empty.

“I understand that these events are seen by many in a particular context, but they should each be carefully investigated and assessed,” de Maiziere told Funke media group in an interview. “We should not hold refugees under a general suspicion, even if there are investigations in individual cases.”