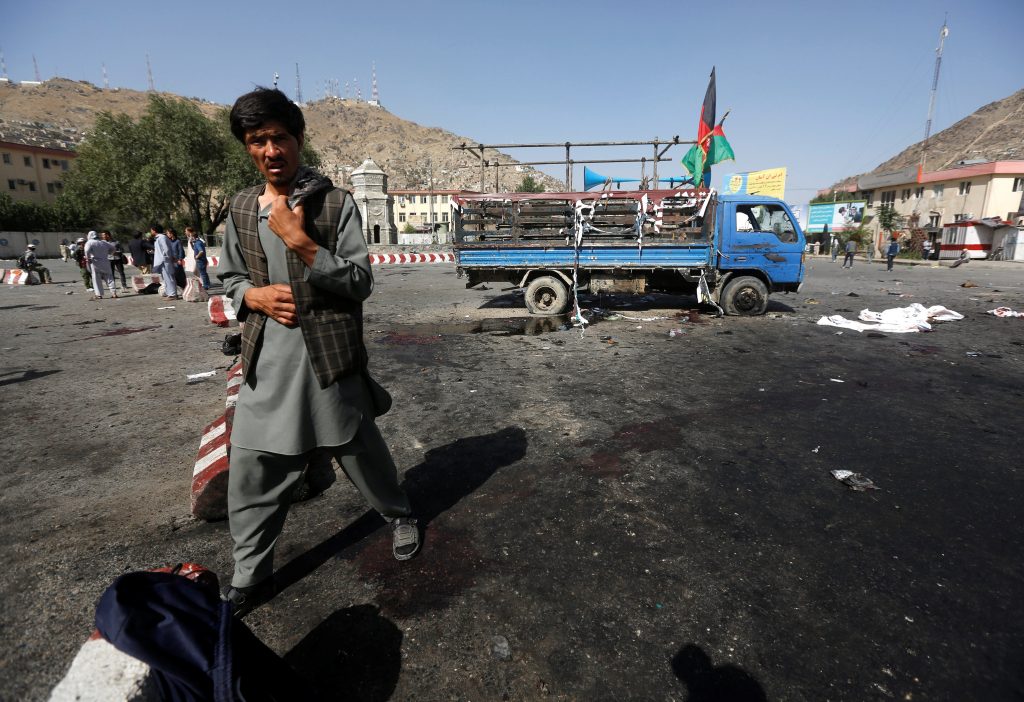 KABUL (Reuters) – Twin explosions tore through a demonstration by members of Afghanistan’s mainly Shiite Hazara minority in Kabul on Saturday, killing at least 80 people and wounding more than 230 in a suicide attack claimed by the Islamic State terror group.

“Two fighters from Islamic State detonated explosive belts at a gathering of Shiites in the city of Kabul in Afghanistan,” said a brief statement on the group’s Amaq news agency.

If confirmed as the work of Islamic State, the attack, among the most deadly since the U.S.-led campaign to oust the Taliban in 2001, would represent a major escalation for a group hitherto largely confined to the eastern province of Nangarhar.

The explicit reference to the Hazara’s Shiite religious affiliation also represents a menacing departure for Afghanistan, where the bloody sectarian rivalry between Sunni and Shiites typical of Iraq has been relatively rare, despite decades of war.

Officials in Afghanistan’s main intelligence agency, the National Directorate for Security (NDS), said the attack was planned by an individual named Abu Ali, an Islamic State terrorist they said was based in Achin district in Nangarhar.

They said three bombers were involved in the attack.

The Persian-speaking Hazara, estimated to make up about 9 percent of the population, are Afghanistan’s third-largest minority, but they have long suffered discrimination and thousands were killed during the period of Taliban rule.

The Taliban, a fierce enemy of Islamic State, denied any involvement and said in a statement posted on its site that the attack was “a plot to ignite civil war.”

The attack succeeded despite tight security which saw much of the city center sealed off before the demonstration with stacks of shipping containers and other obstacles, and helicopters patrolling overhead.

An Interior Ministry statement said 80 people had been killed and 231 wounded, with local hospitals straining to cope with those being brought in.

The worst previous attack against the Hazara was in December 2011, when more than 55 people were killed in Kabul during the Shiite festival of Ashura. That attack was claimed by a Pakistani Sunni extremist group called Lashkar-e-Jhangvi.

President Ashraf Ghani declared a national day of mourning and vowed revenge, while the top United Nations official in Afghanistan, Tadamichi Yamamoto, condemned the attack as a war crime. The United States offered assistance to investigate the attack.

Saturday’s demonstrators had been demanding that a 500 kV transmission line from Turkmenistan to Kabul be rerouted through two provinces with large Hazara populations, saying they feared being shut out of the project.

The government said the project guaranteed ample power to the provinces, Bamyan and Wardak, which lie west of Kabul, and that altering the planned route would delay it by years and cost millions of dollars. But the resentment felt by many Hazaras runs deeper than simple questions of energy supply.

In November, thousands of Hazaras marched through Kabul to protest government inaction after seven members of their community were beheaded by Islamist terrorists, and several protesters tried to force their way into the presidential palace.

The protests by a group whose leaders include members of the national unity government have put pressure on Ghani, who has faced growing opposition from both inside and outside the government.

They also risk exacerbating ethnic tensions with other groups and provinces the government says would have to wait up to three years for power if the route were changed.

The transmission line, intended to provide secure electricity to 10 provinces, is part of the so-called TUTAP project backed by the Asia Development Bank, linking energy-rich states of Central Asia with Afghanistan and Pakistan.