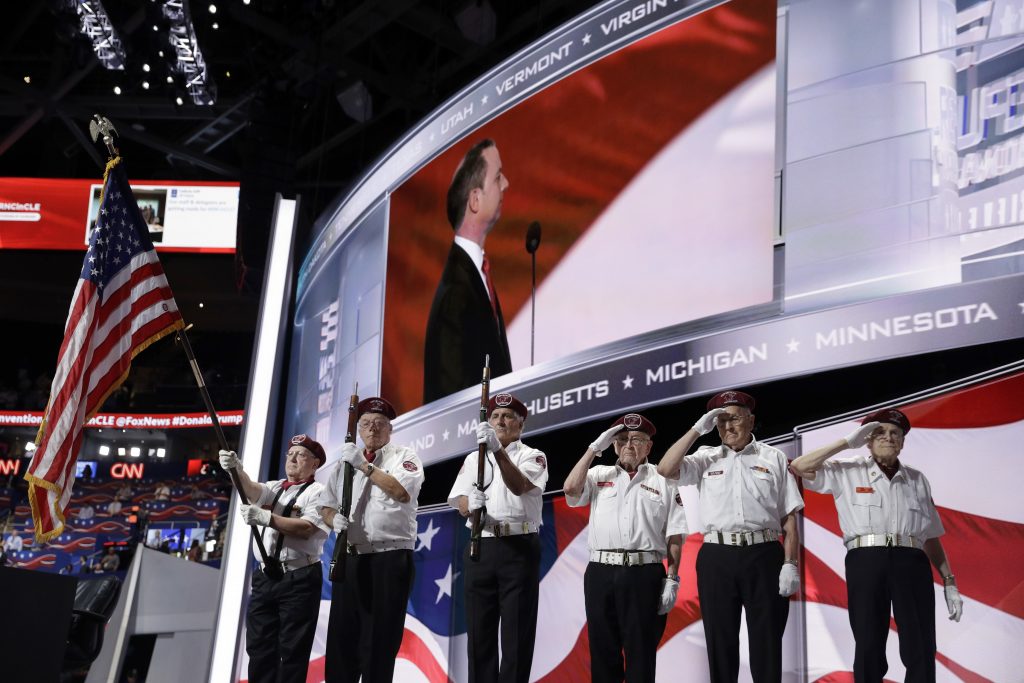 Braced for uncertainty and struggling for unity, Republicans prepared to kick off their convention to nominate Donald Trump on Monday as dissident delegates pursued one last chance to deny him, and the nation reeled from yet another outburst of violence.

True to form, Trump himself provided the first curveball of the week, announcing he will make an unexpected swing to the convention hall Monday night to introduce his wife, Melania, on the first night of speeches.

“I want to watch,” Trump said on Fox News. “It is going to be very exciting.”

This week will belong to Trump — his chance to stand at the pinnacle of American politics in a triumph that few could have imagined when the New York billionaire entered the race a year ago.

The lineup of speakers is aimed at showing off the man behind the mogul, his advisers say. Several family members and friends are slated to speak to his character and reveal a side of Trump that Americans may not know.

Along with Melania Trump, Monday’s opening night speeches include a mix of figures linked broadly under the theme of “Make America Safe Again.” They include Sens. Joni Ernst of Iowa and Jeff Sessions of Alabama, as well as immigration advocates, a Marine who fought in the Benghazi attack.

However, the speakers highlight the wedge Trump’s candidacy has driven through the GOP. Many GOP leaders, party elders and rising stars have steered clear of Cleveland, wary of being linked to the nominee. Others have come to town to meet with donors and rank-and-file but have kept their distance from the main event.

New Mexico Gov. Susana Martinez came to Cleveland but had no role on the program. When House Speaker Paul Ryan spoke to Wisconsin delegates Monday morning, he made no mention of Trump in his remarks. Ohio Gov. John Kasich, a vanquished Trump rival, planned several public appearances but wasn’t going to step inside the Quicken Loans Arena.

“Certainly the Bush family, we would have liked to have had them. They’re part of the past. We’re dealing with the future.”

“When we leave here, by and large, it’s going to be a united Republican Party,” he said.

That remained to be seen. Disaffected delegates continued to try to derail Trump.

All delegates are due to vote Monday afternoon on the rules that will govern the convention week, and insurgent delegates are circulating a petition to force a state-by-state vote — a threat to disrupt floor proceedings even if it fails.

The Minnesota delegation announced it was on board with the plan.

Trump’s opponents want to change a rule that requires delegates to vote for the candidate to whom they were committed after state primaries and caucuses. Trump has far more than the 1,237 delegates required to win.

Some rebellious delegates are threatening to walk out.

“We won’t sit around and coronate a king,” said Colorado delegate Kendal Unruh, who like many insurgents has backed vanquished contender Sen. Ted Cruz of Texas.

“It’s not a movement,”Manafort said. “It’s some rogue, recalcitrant delegates.”

The roll call vote on the nomination is expected Tuesday, with Trump scheduled to close the convention with an acceptance speech late Thursday. Vice presidential pick Mike Pence is to speak Wednesday.

Trump is gaining the nomination during a summer of unsettling violence at home and abroad. In a matter of weeks, Americans have seen deadly police shootings, a shocking ambush of police in Texas and escalating racial tensions, not to mention a failed coup in Turkey and a gruesome Bastille Day attack in Nice, France. The killing of three police officers in Baton Rouge, Louisiana, early Sunday added to the sense of a nation on edge.

Trump has sought to capitalize on the mood by casting himself as the “law and order candidate” and blasting Democrats for weak leadership in a crisis.

On Monday, he quickly linked the shooter to “radical Islam,” despite early indications the man had no known ties to any extremist group. Former Marine Gavin Eugene Long “seems to be a member of that group also. It seems to be something going on there,” Trump said on Fox News.

Protests are widely expected outside the fenced-off convention site. The city’s police chief, Calvin Williams, said it seems everyone is arriving to “exercise their First Amendment rights.”

Williams said security planners considered whether a ban on the open carry of firearms could be enforced during the convention, but learned that police had no authority to override state law.

The president of one of Cleveland’s police unions asked Gov. Kasich to suspend the law that allows legal gun owners to carry firearms openly. Kasich countered that he doesn’t have the authority to do so.

About a dozen people were seen with guns before the start of a Monday rally.

Democrats also angled for some of the attention on Cleveland.