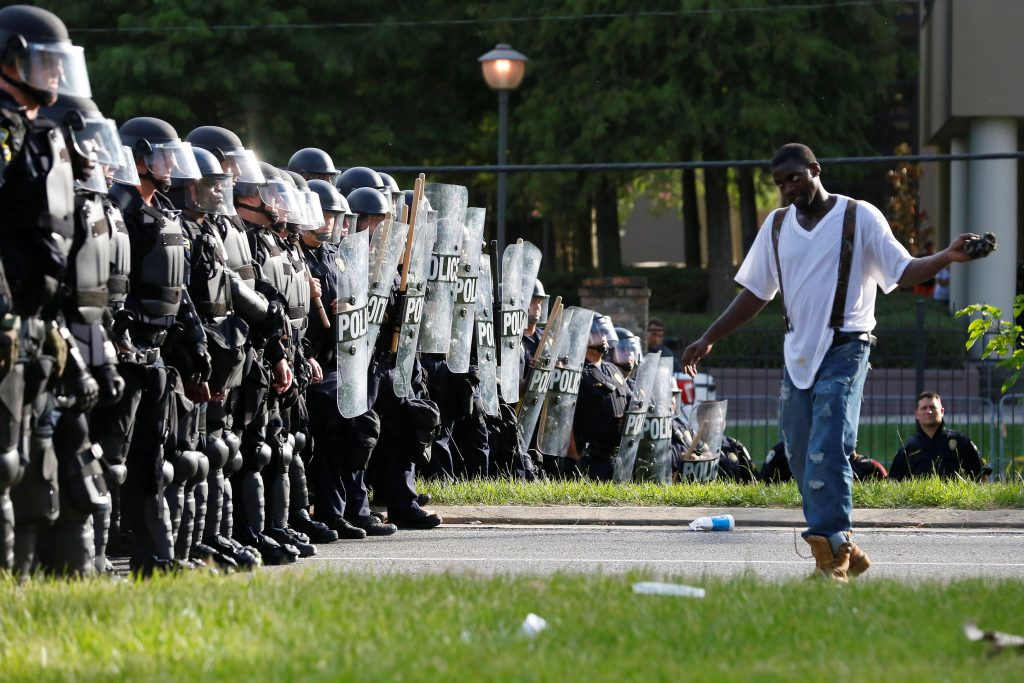 Protesters angry over the fatal shooting of a black man by two white Baton Rouge police officers rallied Saturday at the convenience store where he was shot, in front of the city’s police department and at the state Capitol for another day of demonstrations.

The gatherings came after overnight demonstrations produced tense moments resulting in 30 arrests. The demonstration Saturday outside the Baton Rouge Police Department was at times tense again, as protesters faced off against police dressed in riot gear.

The protesters were demonstrating against the shooting death Tuesday of 37-year-old Alton Sterling. The Department of Justice has opened an investigation into his death, which has angered many in the black community.

Shouting “No justice! No peace!” a few hundred protesters gathered outside the police department, waving homemade signs as passing cars honked their support. Some drivers stopped with bottles of water.

At one point, police in riot gear came out to clear the road, as crowds of demonstrators yelled at them. A police spokesman said two firearms were confiscated and several arrests made. A police officer on a microphone told the crowd that as long as they stayed on the grass and not on the road they could remain, and then the police eventually pulled back and traffic reopened.

Prominent Black Lives Matter activist DeRay McKesson was among those arrested Saturday night, according to an Associated Press reporter who was at the scene. It was not immediately clear what prompted McKesson’s arrest. McKesson was walking alongside Airline Highway when he was arrested. McKesson is one of the most recognizable faces to emerge from the Black Lives Matter movement. The former educator built a national following after he left his then-home and job in Minneapolis in August 2014 for Ferguson, Missouri, to document the rising anger over race relations after the police shooting of Michael Brown.

Members of the New Black Panther Party for Self Defense called for the arrest and indictment of the officers involved in Sterling’s shooting, shouting “Black Power” and raising their fists.

“These are human rights violations,” Krystal Muhammad shouted to the crowd at the convenience store before heading over to the police department. “They are not operating as human beings. They are being predators on our communities across America.”

Baton Rouge police said in a written statement they are investigating a newspaper website’s video that appears to show an officer with his weapon temporarily drawn at one point early Saturday morning as angry protesters confronted police.

“We are reviewing the video. It’s difficult to tell why the officer pulled his weapon. We are working to identify this officer so we can better understand the reason he might have done this,” said the e-mailed statement from Lt. Jonny Dunham of the Baton Rouge Police Department.

“After the Dallas murder of five officers at a protest the night before, officers are very cautious and on the lookout for any threat,” Duhnam’s statement said. “Tensions were very high last night on both sides. But in the end cooler heads prevailed.”