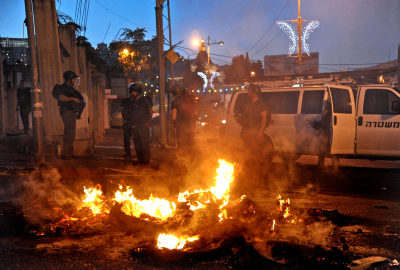 The family of Muhammad Abu-Khdeir, the Arab teen who was burned to death in 2014 by Jews, has filed a petition with the High Court demanding that the IDF demolish the homes of the Israelis convicted of his murder. The petition demands the demolition in order to ensure equality with the demolition of the homes of Arab terrorists.

Abu-Khdeir was kidnapped from in Shuafat and taken to the Yerushalayim Forest, where three Jews tied him up and set fire to him. The three were convicted and sentenced, and are serving terms of between 20 months and life imprisonment.

According to the petition, “the state must act in an equitable manner and demolition the homes of the three, just as it does for Palestinians.” In response, the state said that the demolition of Palestinian homes was not done as revenge for an attack, but as a warning to others not to attempt to duplicate their efforts. Responding to that point, the petitioners said that recent events had proven that there was an organized incitement campaign against Palestinians, and that the state needed to provide a warning for members of this group as well.

Meanwhile, a Tel Aviv court on Thursday released a suspect who had been held until the end of proceedings against him in the Duma arson case. The Shin Bet had arrested a number of suspects in the case, in which Jewish arsonists were suspected in the firebombing of the homes of the Dawabsheh family in January 2015, in which 18-month-old Ali Dawabsheh was killed. Indicted in the incident was a 21-year-old Israeli, who confessed to participating in the crime but later said that the confession had been extracted from him by “torture,” said his attorney, right-wing activist Itamar Ben Gvir.

A number of minors were also arrested, and it was one of the minors who were released.The youth was represented by Ben Gvir as well, who said that the decision was “an important one, since in the interim after this youth’s arrest numerous minors who threw firebombs at Jews were arrested and released, on the principle that an arrest does not necessarily mean that an individual is guilty and should be punished. I hope that the court will go further and accept the claims of the main suspect in this case that his confession was extracted from him by forcing him to suffer and using deceptive tactics.”