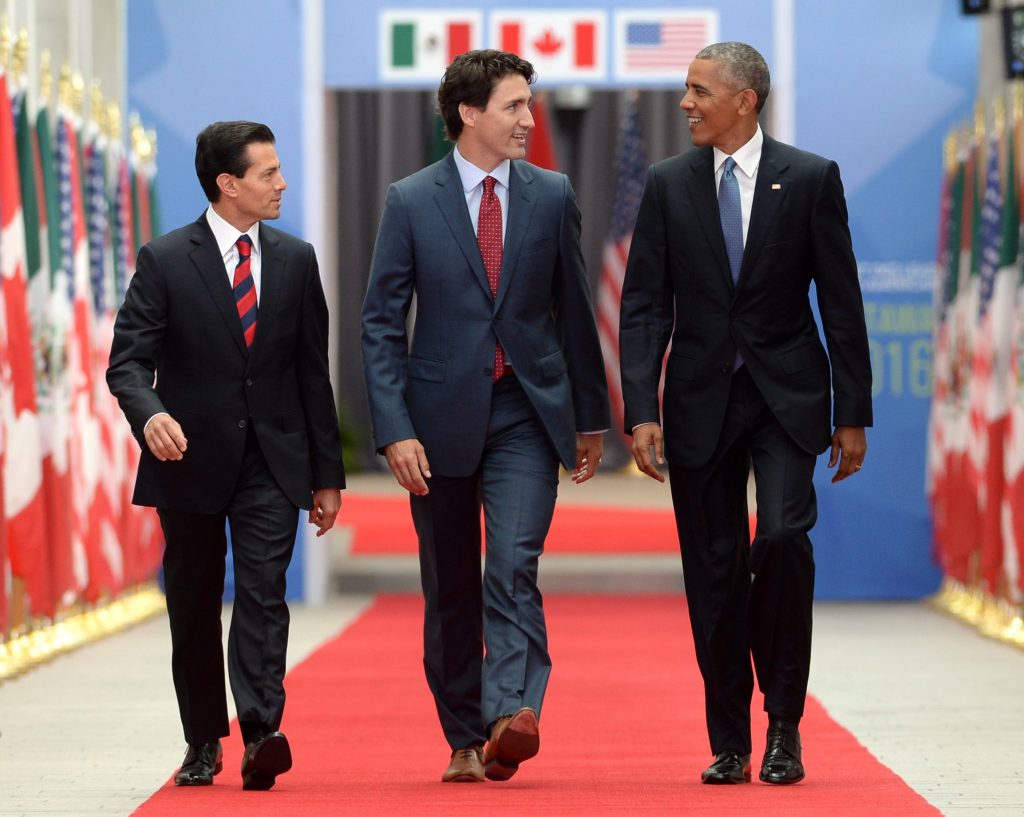 President Barack Obama and the leaders of Mexico and Canada pushed back forcefully on Wednesday against the isolationist and anti-immigrant sentiments that have roiled Britain and been championed by GOP presidential candidate Donald Trump. The leaders warned against easy solutions peddled by “demagogues” who feed on economic anxiety.

With tensions growing over terrorism and fallout from Britain’s exit from the European Union, Obama acknowledged that Americans and others have reason to be concerned about their own future in a rapidly globalizing economy. He said concerns about immigrants had been exploited by politicians in the past, but he insisted he wasn’t worried that Americans will follow that path.

“We should take some of this seriously and answer it boldly and clearly,” Obama said, without naming the Republican presidential candidate. “But you shouldn’t think that is representative of how the American people think.”

Gathering in the Canadian capital, the leaders defended their calls for freer trade within the continent and beyond. They argued that instead of withdrawing from the world, advanced countries should focus on higher standards, wages and legal protections that would ensure the benefits of globalization are widely felt.

Obama’s comments at a news conference with Canadian Prime Minister Justin Trudeau and Mexican President Enrique Peña Nieto came as the leaders sought to show unity amid growing nationalist movements in Europe and elsewhere, epitomized by Britain’s move to leave the 28-member EU.

Though Britain’s decision has rattled the global financial system, Obama said he believed the markets were starting to settle down. Still, he acknowledged there would be “genuine longer-term concerns” about global economic growth “if, in fact, Brexit goes through.”

Obama said his message to British Prime Minister David Cameron and to German Chancellor Angela Merkel, who is largely spearheading Europe’s response, was that “everybody should catch their breath.” Though Merkel and other European leaders have urged Britain to start its withdrawal quickly, Obama called for a thought-out process that would be transparent and clearly understandable.

“I think that will be a difficult, challenging process, but it does not need to be a panicky process,” the president said.

The Canadian and Mexican leaders largely echoed Obama’s calls for staying focused on closer economic ties. Peña Nieto said Mexico sees opportunity for growth and investment by broadening its relationship with the rest of the continent.

“We are competitors, yes, but we have complementary economies, and that will give more development to our society,” the Mexican leader said.

And Trudeau said the three leaders’ strategy for combating protectionist views was to “highlight how much trade and positive agreement among our nations are good not only for the economy of the world and the economy of our countries, but it’s also good for our citizens.”

Yet it was Trump and his insistence that Americans are better served by reasserting independence that shadowed the leaders’ meetings at the annual North American Leaders’ Summit. Even as the three took the podium in Ottawa, Trump was threatening to pull the U.S. out of the North American Free Trade Agreement, chanting at a rally, “No more NAFTA.”

When a reporter asked the leaders to weigh in on Trump, Obama intervened, suggesting his counterparts should be careful what they say in case Trump ends up winning.

He appeared personally insulted by Trump’s claims to represent the public’s best interests, accusing the presumptive Republican nominee of wrongly purporting to be a populist. He said people like Vermont Sen. Bernie Sanders rightly deserve label of “populist” but that Trump is merely resorting to “nativism,” ”xenophobia” and “cynicism.”

“We have to call this mentality what it is: a threat to the values that we profess, the values we seek to defend,” Obama said later during a speech to Canadian Parliament, where a packed audience of about 1,000 interrupted him repeatedly with standing ovations. They chanted “four more years” as Obama wrapped up his address.

Ahead of the summit, Canada announced it will lift visa requirements for Mexican visitors as of December 2016, while Peña Nieto agreed to open Mexican markets to Canadian beef. All three leaders pledged to generate half of their electricity from renewable sources by 2025, and Mexico also committed to joining the U.S. and Canada in tackling methane emissions.