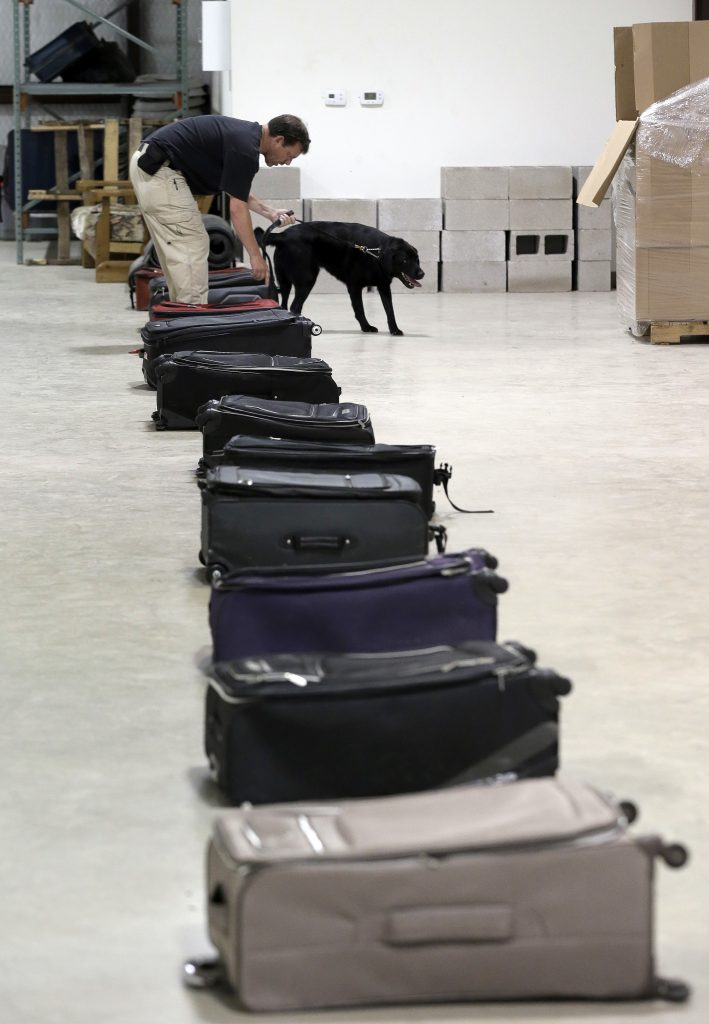 Covering their ears, 192 future airport security officers watched from a grandstand as Larry Colburn detonated a plastic-explosives device like the one carried by the underwear bomber in a failed attempt to blow up a plane on Dec. 25, 2009.

A tremendous boom was accompanied by a plume of black and gray smoke. A wave of blast pressure ripples through the air, hitting the spectators.

Colburn, a former Memphis police bomb squad commander, tells his audience that a very small amount of the explosive, PTEN, can do tremendous damage.

“That is an eye-opener,” says Betsy Bueno. “That makes you want to do the job.”

Bueno is joining the Transportation Security Administration, the agency responsible for protecting the traveling public from terrorists. Many travelers associate the TSA with long lines and uncomfortable pat-downs. Critics say the agency gives the appearance of airport security without doing much to make air travel safe.

Screeners performed dismally in tests last year involving mock weapons and bombs being smuggled through checkpoints. The TSA suffers from understaffing, low morale and high turnover. Peter Neffenger, the agency’s sixth and current administrator, wants to hire more enthusiastic agents like Bueno and train them better, and also make greater use of bomb-sniffing dogs as ways to improve TSA performance.

Since January, almost all new hires have gone through a two-week course at a sprawling federal installation in Georgia. And TSA recently opened a new facility in Texas to train more dogs in bomb detection. The Associated Press took a look behind the scenes at both operations.

TSA was built on the fly after the September 2001 terror attacks. Since the agency’s inception, screeners have been trained piecemeal at airports around the country. Neffenger decided to centralize and standardize training at a former naval air station in Glynco that is used by more than 90 other law enforcement agencies. TSA said it spends $2,400 per trainee on travel and lodging for their nine-day course at Glynco.

“By bringing them here to the academy, we’re sure that all of the officers are getting the exact same training, the exact same procedures,” says Douglas Yates, who worked at Palm Beach (Florida) International Airport and is now an instructor at the Georgia center. Under the airport-based approach, he says, “there is always the possibility that some of the local things might creep in that are not proper or not according to the program.”

There is classroom instruction on reading X-ray images, detecting explosives and other weapons, methods that terrorists use to conceal weapons, and handling hostile travelers. The heart of the academy is a fully equipped TSA checkpoint.

Instructors say the hardest part for trainees is interpreting X-ray images. That could explain screeners’ poor performance in audits; according to published reports, screeners working at airports across the country missed banned objects 67 out of 70 times in one test, a 96 percent failure rate.

New hires take up to 20 hours of classroom instruction with the screening machines and are drilled to ask for a supervisor’s opinion if something looks suspicious.

Some threats are obvious on screens in the mock checkpoint — a handgun left in a bag. Others are ambiguous — a jumble of wires that could be part of a bomb or just the accoutrements of modern, connected life.

Trainees must pass written and hands-on tests during the course to be hired. The washout rate is remarkably low, just 1 percent. An instructor, Elaine Wilson Harrison, says that is partly because trainees get remedial help if they fail part of the course.

Anthony Roman, an aviation-security expert who runs an investigative consulting firm, says recent audits like the one with a 96 percent failure rate prove that TSA training has been poor. He says the creation of a central academy was a good first step.

“I don’t think nine days is long enough, but we need many, many more TSA officers and we need them now,” he says.

Roman says he already sees signs that better training is paying off. He says TSA’s pat-downs are better and more military-like, more bags are being rescreened, and screeners are quicker to call a supervisor over to take a second look at an X-ray image.

At the academy, new hires are taught about TSA’s history — an effort to make them feel special and less likely to quit. The work of airport screeners is often boring, adding to the agency’s retention problem.

In figures provided to The Associated Press, TSA disclosed that more than 18,000 full-time and 16,000 part-time screeners have quit or been fired since October 2010.

In that time TSA hired only 2,534 full-time replacements but added more than 34,000 part-timers. The agency converted 26,371 part-time officers — including ones hired before 2010 — to full-time jobs.

The agency is authorized to have the equivalent of 42,525 full-time screeners.

TSA veterans say that they do important work and that it’s not a dead-end career.

“I myself started out part-time and I worked my way up the ranks,” said Wilson Harrison, who began at Memphis International Airport and moved up to Miami International before becoming an academy instructor. “Some of them do use it as a stepping stone to go to other agencies, but the majority of the students say that they would like to stay with TSA and make it a career.”

Crystal Champagne, a 28-year from Minneapolis who worked for TSA in 2013 and is returning after a stint as a caregiver, says retention is tied to respect.

“We’re all working together to keep our country safe,” she says. “If we continue to show officers that’s what this is about and it is truly necessary — and not to listen to media — I think we’ll do well and we’ll stay.”

A TSA spokesman says full-time screeners start at $25,000 to $30,000 a year. On the federal government’s jobs website, slightly higher salaries are listed in some high-cost areas. The vast majority of listings, however, are for part-time jobs paying $15 to $22 an hour.

Screeners must be at least 18 years old and hold a high school degree or the equivalent or have one year of full-time experience in a related field such as airport security or reading X-rays. Some new hires are in their 50s. The average new hire is 32, and 17 percent of screeners are veterans, according to TSA.

Halfway across the country, at Lackland Air Force Base in Texas, TSA handlers at a new $14 million facility are training more dogs to sniff out explosives.

Ford Rinewalt keeps Sylvia, a 2-year-old German shorthaired pointer, on a short leash while they move briskly up and down aisles in a cargo-filled warehouse. As they turn a corner, Sylvia suddenly stops and focuses on a large box inside which trainers had hidden explosives-dusted bait.

“Good dog! Good dog!” Rinewalt exclaims as he rewards the dog with belly rubs and a toy.

“There is no way you can trick the dog if it is trained well,” says Rinewalt’s supervisor, Robert Grauel, who keeps a close eye on the handler and the dog from a few paces away. Drug smugglers have tried everything from ground coffee to layers of plastic, but the canine sense of smell is too keen, he says.

Dogs speed up the checkpoints because travelers who pass the canine smell test can be moved to expedited-screening lanes where they don’t have to remove shoes, belts and jackets or take laptops out of their bags.

The dogs’ usefulness goes beyond convenience. TSA officials believe that dogs, along with uniformed police officers, are a deterrent. And if dogs help move passengers through checkpoints faster, that could eliminate long lines that are themselves a target for terrorists.

Part of the cabin of a wide-body airliner has been reassembled so the dogs can be trained to search a plane. There is also a mock airport gate, complete with “passengers” hired for the day from a temp agency.

Once the dogs are taught to find explosives they are paired with a trainer who must learn to lead the dog on methodical searches so that no area is missed, and to interpret the animal’s behavior.

The training costs $30,000 to $55,000 per dog and, officials said, is constantly tweaked to keep up with changes in the materials and methods used by terrorists.

TSA has about 320 dogs to sniff cargo at airports and train stations; about 140 are also trained to work on people. Neffenger said recently that his agency could use 500 dogs if it had the money, and before Memorial Day he moved more dog teams to the busiest airports to help reduce lines.