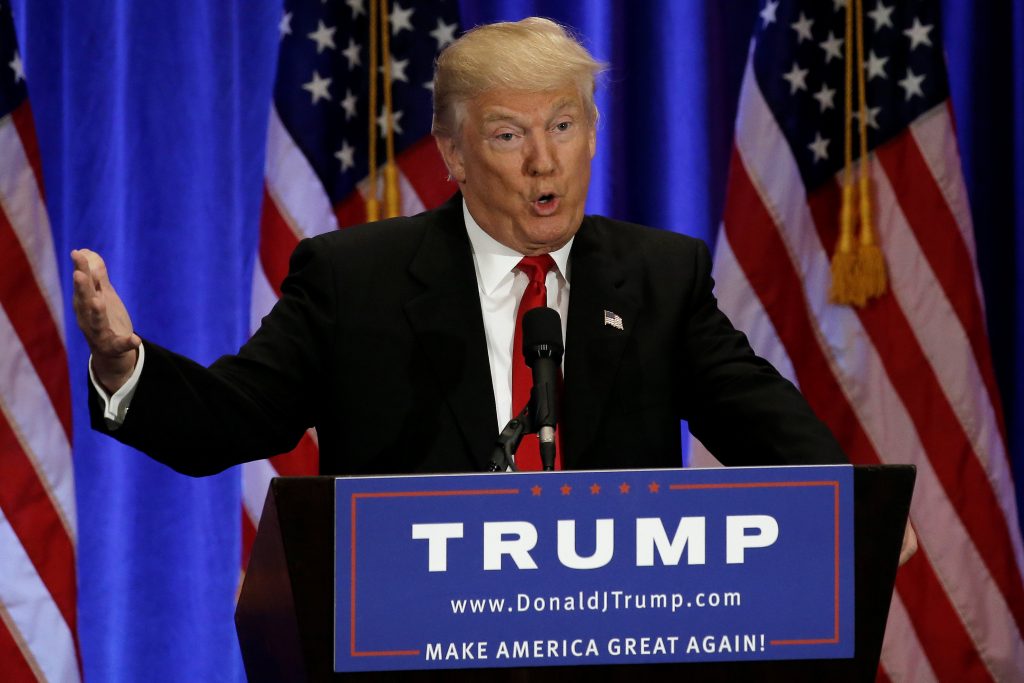 Donald Trump launched a broad rebuke of his presidential rival Hillary Clinton Wednesday, accusing her of being “a world class liar” who personally profited from her tenure at the State Department. “She gets rich making you poor,” Trump said.

Seeking to steady his campaign after a difficult stretch, the presumptive Republican nominee cast himself as the White House candidate best positioned to address Americans’ economic interests.

“This election will decide whether we’re ruled by the people or the politicians,” Trump said during an address at his hotel in New York’s SoHo neighborhood. He made his arguments in a pointed yet measured tone, less loud and strident than has been typical in most previous campaign speeches.

The speech marked an opening salvo against Clinton, the presumptive Democratic presidential nominee, in the general election campaign. It came as the real estate mogul faced growing questions about his readiness not just for the presidency, but for the campaign he will need to run to get there.

Trump made a direct appeal to supporters of Clinton’s primary rival Bernie Sanders, urging them to help him fix a “rigged system.” He also argued his trade and immigration policies would be more beneficial than Clinton’s for blacks and Hispanics, two groups that have overwhelmingly voted for Democrats in recent presidential elections.

Still, the central goal of Trump’s speech appeared to be uniting the Republican Party and appealing to people who may be skeptical of him but vigorously oppose Clinton. He unleashed a grab bag of Republicans’ favorite criticisms of Clinton, including her use of a private email server while she was secretary of state, her response to the deadly 2012 attacks on Americans in Benghazi, Libya, and accusations that she and former President Bill Clinton profited from their family foundation.

“Hillary Clinton may be the most corrupt person ever to seek the presidency,” Trump said.

The Republican candidate also argued that Clinton’s opposition to a massive Asia-Pacific trade pact was an example of her political opportunism, noting that she had worked on the agreement while at the State Department and has previously backed free trade accords. And he took aim at her immigration policies, saying her call for providing those in the U.S. illegally with a path to citizenship amounted to “mass amnesty.”

During the speech, Trump read a letter from a woman whose son was killed by an illegal immigrant; the woman said that Clinton “needs to go to prison to pay for the crimes she has already committed against this country.”

In his speech, Trump also laid out a number of goals for the first 100 days of his potential presidential administration.

Trump said he would “appoint judges who uphold the Constitution,” reform the nation’s immigration policies and repeal the Affordable Care Act.

He also said he would toughen the nation’s trade policies, lift restrictions on energy productions and overhaul the nation’s tax code.

And in a swipe at Clinton, he said he would “impose tough new ethics rules to restore dignity to the office of the secretary of state.”

Trump’s remarks came one day after Clinton launched her own blistering attacks on her White House rival. She moved to undercut Trump’s argument that his business record would help him create jobs as president, arguing instead that he had been “reckless” with his companies and “shouldn’t have his hands on our economy.”

Trump also tried to turn Clinton’s strengths into negatives. He spent much of his speech trying to undercut her foreign-policy record, highlighting her early support of the 2003 invasion of Iraq, which she now says was a mistake, and linking the policies she promoted at the State Department to the rise of the Islamic State terror group.