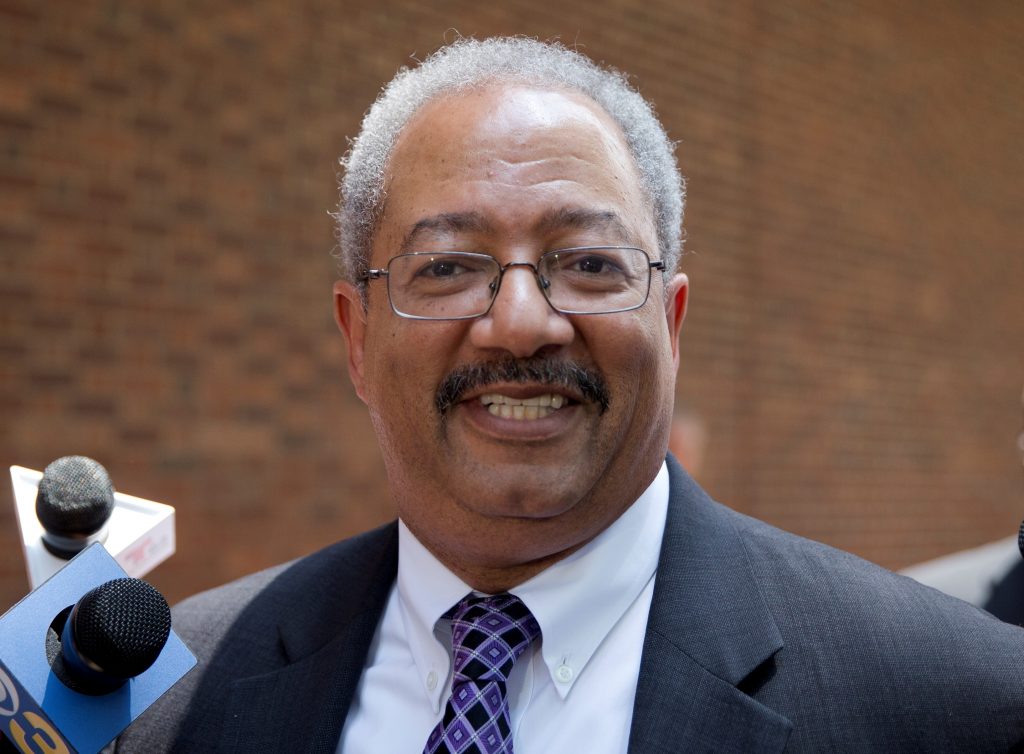 U.S. Rep. Chaka Fattah, D.-Pa., was convicted Tuesday in a federal racketeering case likely to send him to prison.

The verdict — announced by a jury of eight women and four men — comes after a four-week trial in which prosecutors alleged that Fattah took bribes and repeatedly stole charitable donations, campaign contributions and federal grant money under his control.

It marks an ignominious end to the career of one of the region’s longest-serving members of Congress. Fattah lost his bid for re-election to a 12th term to State Rep. Dwight Evans in April’s Democratic primary, just weeks before the trial began.

The jury convicted Fattah of all charges. Sentencing was set for Oct. 4.

“It’s a tough day,” Fattah said as he left the federal courthouse after the verdict. “I want to thank the jurors.”

He declined to say whether he would resign from Congress, saying he wanted to consult with his lawyers first.

Throughout the trial, prosecutors painted Fattah, 59, as an arrogant politician who repeatedly turned to the money of others — taxpayers, charities he founded, wealthy fundraisers — to cover his personal and political debts.

Though Fattah struggled to raise campaign money throughout his career, Assistant U.S. Attorneys Gibson, Paul Gray and Jonathan Kravis said, he repeatedly acted as if the rules did not apply to him.

Fattah pushed back against that characterization and accused the Justice Department of trying to tarnish his reputation with a weak case. His lawyer, Samuel Silver, told jurors in closing arguments that federal authorities delivered a “mishmash” of a case in a desperate effort to charge the congressman with something after investigating his family for years.

He blamed many of the criminal acts alleged against Fattah and his four codefendants, all longtime members of the congressman’s inner circle, on two former campaign aides who pleaded guilty to federal crimes and agreed to testify against him.

Most of the crimes outlined by prosecutors centered on money owed to creditors after Fattah’s failed 2007 bid to become mayor of Philadelphia, including an alleged plot to steal funds from an education nonprofit he created to repay an illegal $1 million campaign loan.

In addition, Fattah was accused of misdirecting federal grant money to a fake nonprofit in an effort to pay one of his political strategists as well as siphoning funds from his campaign coffers to cover college debts owed by his son, Chaka “Chip” Fattah Jr.

Prosecutors also charged the congressman in a bribery scheme involving Herbert Vederman, one of Fattah’s most prolific fundraisers and a Rendell-era deputy mayor. Through cash payments to the congressman’s children, college tuition payments for his au pair and $18,000 given to help purchase a vacation home in the Poconos, Vederman bought Fattah’s support in seeking appointment by the Obama White House to an ambassadorship, government witnesses alleged. He, too, was charged in the case and convicted of racketeering conspiracy.

Also charged in the case were Karen Nicholas, executive director of a Fattah-founded education nonprofit, and Robert Brand, a family friend and businessman. Both were accused of allowing the organizations they led to be used by Fattah to launder stolen money used to pay back the $1 million campaign loan.

Prosecutors say Bonnie Bowser, Fattah’s former chief of staff in his West Philadelphia office, falsified campaign finance forms and other official documents to cover up her boss’s crimes. Bowser was convicted of some charges, acquitted of others.