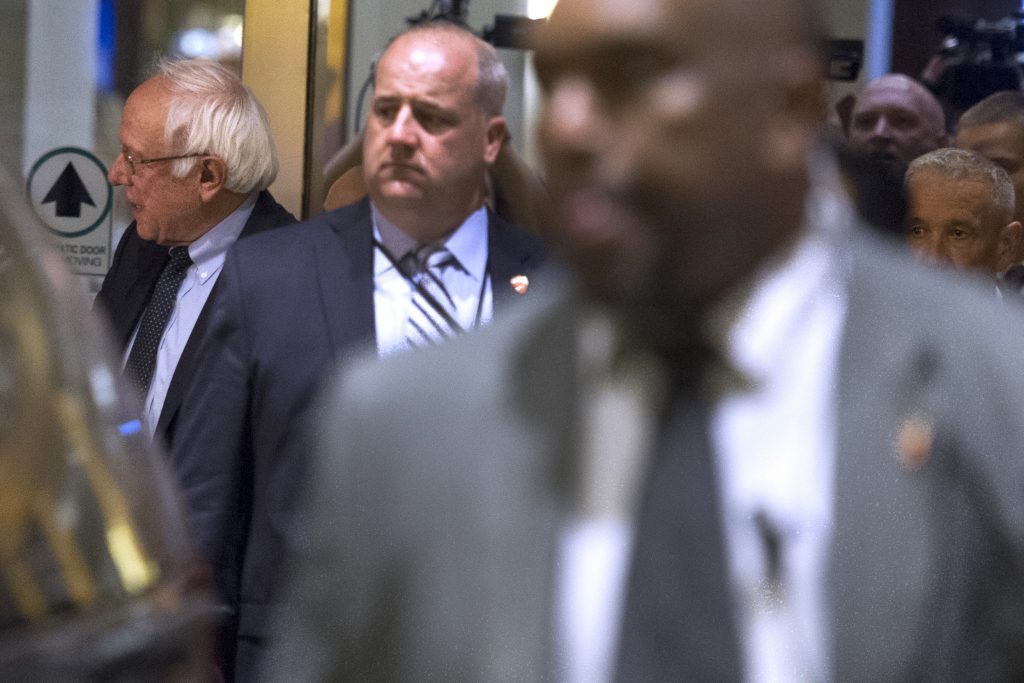 When Sen. Bernie Sanders, the now-vanquished Democratic presidential candidate, returns to Capitol Hill to vote on Monday, he is expected to be accompanied by his constant traveling companions from the campaign trail: the U.S. Secret Service.

Though Hillary Clinton has clinched the party’s nomination, Sanders retains one of the trappings of a top-notch candidate. A team of agents still guards him at his home, where they’ve constructed a small watch station on the property. They travel with him on commercial and charter flights and use a motorcade to whisk him through cities he visits. And they recently marched alongside him during an event here in his hometown after the Orlando shootings.

Such round-the-clock protection can cost taxpayers more than $38,000 a day. And with the potential for the Secret Service to be watching over Sanders through the Democratic convention in Philadelphia five weeks from now, the taxpayers may get stuck with a big security bill long after his campaign receded from the daily cable news cycle.

The continued security presence also reflects a larger reality of Sanders’s muddled standing in the Democratic race. He has virtually no chance of becoming the party’s nominee, and he is no longer pressing his case to Democratic leaders that he should. Yet Sanders remains an active candidate because he has not “suspended” his campaign or taken any other steps that would alter his official status.

“He’s in a kind of political purgatory right now,” said Mary Anne Marsh, a Democratic strategist who has worked for neither the Clinton nor Sanders campaign. “He has the perception of still running for president, but he’s not doing that in reality.”

Aides to Sanders say he is most focused now on trying to parlay his unexpectedly strong performance in the Democratic primaries into concrete changes to the party’s platform and upcoming legislative agenda. To advance those goals, Sanders met last week in Washington with Clinton. Staffers are continuing to talk about how she might adopt some of the ideas, such as tuition-free college, that he pressed during his campaign.

Depending on how that effort goes, it’s possible that Sanders could endorse Clinton before the July 25 start of the convention in Philadelphia, Sanders’s campaign manager, Jeff Weaver, said.

Yet even if that happens, Sanders has no plans to suspend his campaign before the convention, when the party’s platform is completed, Weaver said. Asked to explain the distinction between endorsing another candidate and dropping out, Weaver shrugged his shoulders and demurred.

The senator from Vermont declined repeated requests over the past week for an interview about the status of his campaign. Citing a policy not to talk about issues affecting his security, Sanders’s aides declined to publicly discuss the most visible sign of his ongoing candidacy – his Secret Service protection.

Sanders’ protective detail was on full display Tuesday in Washington – the day of the final Democratic primary, in the District of Columbia – as his motorcade sped from Capitol Hill to the Capital Hilton, near the White House, for the much-anticipated meeting with Clinton, which started shortly after the polls had closed.

Sirens from a Metropolitan Police Department SUV blared as the cars sped to a stop in the driveway, and a half-dozen Secret Service agents in dark suits exited the vehicles. A handful of them glanced around, keeping a protective circle around the gold-colored SUV that Sanders sat in. Another whispered into a microphone on his sleeve. A moment later, the agent guardedly opened the door, and Sanders and his wife, Jane, emerged.

As Sanders and his entourage breezed through the lobby, they were greeted by a large crowd of onlookers who clapped and yelled “Bernie!”

“There’s no denying that some of the accoutrements that come with campaigns can be intoxicating,” said Jim Manley, a long-time Democratic operative who is supporting Clinton. But Manley said he thinks there’s a broader explanation for why Sanders remains a candidate at a time when, in his view, the party would be better served by Sanders rallying around Clinton.

“He is just so convinced of the righteousness of his cause that I think he is having trouble giving it all up,” Manley said.

The Secret Service declined to discuss Sanders’s protection on the record, instead pointing to general policies and other documents already in the public realm.

“He’s still a candidate for president, so we continue to protect him,” said one agent, who requested anonymity because he is not authorized to speak for the agency.

Even with an expansive 2016 presidential field – mostly on the Republican side – Sanders was one of only four candidates to receive protection from the Secret Service during the primaries this year.

As the spouse of a former president, Clinton was already covered for life. And at various points, the Service started providing coverage for Sanders and two Republicans: Donald Trump, the real estate mogul and now the GOP’s presumptive nominee, and Ben Carson, the retired neurosurgeon who dropped out in March after disappointing showings in the first nominating contests.

By law, the secretary of the Department of Homeland Security has the authority to grant protection to “major” presidential candidates who request it, after consultation with an advisory committee of congressional leaders. Often, the candidate will have received threats or has reason to believe that an additional risk exists.

There is no formal trigger for ending a candidate’s protection, but that typically happens once a candidate “suspends” his campaign or otherwise makes clear he is dropping out. A candidate is also free to relieve the agents of their services at any time.

After Carson announced he was suspending his campaign, he parted ways with his Secret Service detail within two days, according to Armstrong Williams, one of his closest friends and an informal adviser. The agents dropped off after traveling with Carson to his home in West Palm Beach, said Williams, a conservative political commentator.

“He wasted no time,” Williams said of Carson. “His attitude was, ‘There’s no path forward, and I don’t want to spend the taxpayers’ money.'”

While Carson had deep respect for the work of the Secret Service, Williams said the candidate also experienced a sense of liberation once the agents were gone. He was particularly eager to drive his own car again.

“You don’t really have a life,” Williams said. “They’re with you everywhere.”

There have been prior controversies over whether presidential candidates are hanging on to their Secret Service protection too long.

During the 2012 race, a conservative taxpayers group called on Republican Newt Gingrich to give up his protection once it appeared he no longer had a path to the nomination. The push coincided with Gingrich campaign stops in North Carolina at a NASCAR training facility, a racing museum and a zoo.

In a brief email exchange over the weekend, Gingrich said he thinks it is appropriate for Sanders to keep his protection through the Democratic convention, provided he is still an official candidate for the party’s nomination.

In its fiscal year 2016 budget request, the Secret Service estimated it would need $123.5 million to carry out its protection of presidential candidates. That included party conventions and debates.

The Service would not discuss costs associated with individual candidates. However, in 2008, the agency’s director testified to Congress that the cost averages about $38,000 a day – a figure likely to have increased in the intervening years.

Aides to Sanders didn’t dispute the figure but argued that the costs associated with his coverage now are dramatically lower than they had been at the height of the campaign, when Sanders was holding several rallies a day in different cities – all of which were staffed by teams of Secret Service agents.

The aides also noted that politicians do face real risks, citing the death last week of Jo Cox, a British member of Parliament who was stabbed and shot.

More recently, Sanders has been keeping a relatively low profile and spending most nights at his home in Vermont. Over the weekend, a pair of agents were stationed outside his home in a quiet Burlington neighborhood where many neighbors still displayed “Bernie 2016” yard signs. The siding on the small watch station there, installed by the Secret Service, matches that of Sanders’s home.

On Monday, Sanders plans to travel to Washington to cast his first votes since January, on gun legislation in the wake of the Orlando massacre.

As of Sunday, Sanders trailed Clinton by 926 delegates, according to the latest Associated Press tally. The only way for him to wrest the nomination from Clinton at the convention would be to flip the allegiances of hundreds of “superdelegates” – Democratic elected officials and other party elites – who’ve already announced their support for Clinton.

Sanders had vowed to undertake that task, but aides said he now has no plans to do so.

Joe Trippi, a longtime Democratic operative, said it can be “a really tough thing” for any political candidate who’s run a long race to walk away from his candidacy. But Trippi also argued that Sanders might ultimately be doing Clinton a favor by holding off on his exit from the race, particularly given how reluctant some of Sanders’s supporters are to back Clinton.

“It’s going to be a lot easier not to turn on a dime,” Trippi said. “That might be less jarring to his supporters. You slow the train down before you stop it.”

Other Democrats are less charitable.  Marsh said the delay in Sanders’s concession to Clinton is puzzling to many in the party.