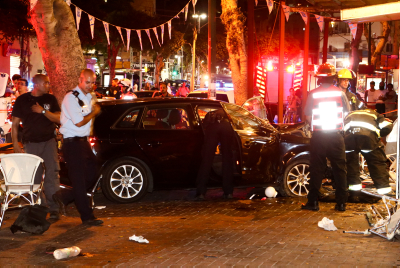 Three people were killed Motzoei Shabbos in central Tel Aviv when a driver lost control of his vehicle and veered into patrons sitting outside a restaurant on Ben Yehuda Street. Two patrons were killed in the incident, along with the driver, a 41-year-old man from Raanana.

Dramatic footage captured by security cameras at the restaurant captured the moment when the driver rammed into the crowd. Along with the two victims who were killed, six other people were injured, one moderately and five lightly.

Police have opened an investigation into how the driver lost control. Ben Yehuda Street is a generally congested one lane avenue, and the driver did not appear to be speeding. Police believe he may have had some sort of attack that caused him to lose consciousness.