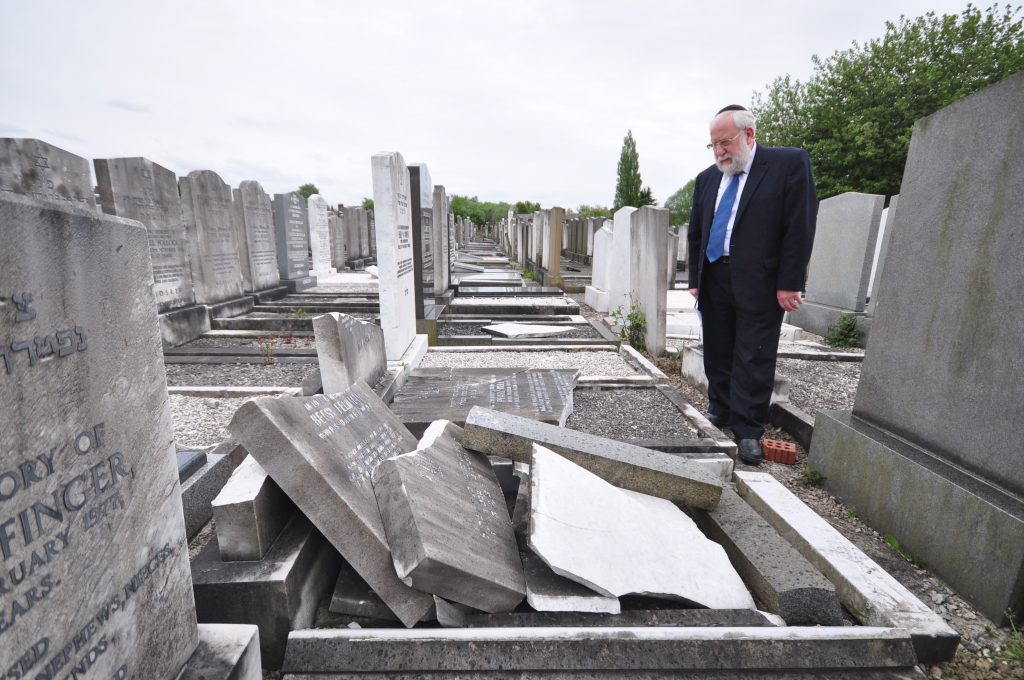 Local police were called to the Blackley Jewish Cemetery Wednesday and found 14 kevarim that had been attacked with the matzeivos knocked over and smashed. The police described the destruction as ‘sickening acts of anti-Semitism.’

Stephen Wilson, administrator for the North Manchester Jewish Cemeteries Trust, said: “I think this is mindless vandalism. I just don’t think they understand the unnecessary distress they cause to the families of these departed loved ones. It’s mindless – they need to find better things to do and make a more useful contribution to society than rampaging cemeteries.

“I think they need help – they need education and probably counseling.”

Police have boosted patrols in the area and are appealing for witnesses in the community for more information.

Chief Supt. Wasim Chaudhry from GMP’s North Manchester Division said to local media: “This is a sickening act of criminal damage which we are taking very seriously. I believe this was a deliberate and targeted attack and there is no place for such abhorrent behavior in our communities.

“All decent members of the public recognize that a cemetery is supposed to be a resting place for people who have passed away; a place of sanctity and dignity where families can come and pay their respects. So to have those graves desecrated in such a disgusting and disrespectful way will no doubt cause immeasurable anguish to the families and loved ones affected.

“I cannot begin to get into the mind of someone who would commit such an atrocity. I know this will cause a lot of anxiety and distress in the local community and we as police officers and my colleagues at Manchester City Council and Oldham Council share that distress.

“We will do everything we can to find out who is responsible and bring the full force of the law down on them. This has been recorded as a hate crime because of the clear racial motivation and, should we find those who committed this cowardly act, that will allow the courts to impose even harsher punishments.”

Tony Lloyd, Greater Manchester Mayor and Police and Crime Commissioner, also hit out at the vandalism.

He said: “This is a disgusting act of vandalism that will cause anguish, fear and anger among our communities, and could lead to serious divisions within our neighborhoods. I am pleased that Greater Manchester Police has responded so quickly to this incident and correctly identified this abhorrent desecration as a hate crime.

“We’re in contact with the Community Security Trust – an organization that protects British Jews from anti-Semitism and related threats – and I want to reassure them, and our Jewish community, that such deplorable behavior will not be tolerated in Greater Manchester.”