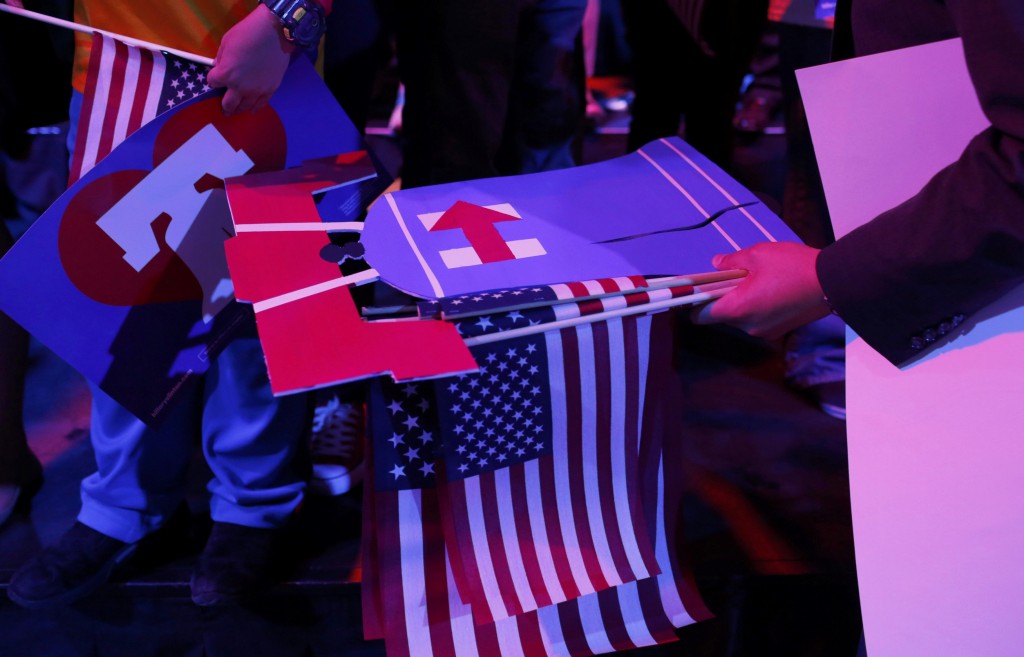 Businessman Donald Trump has been projected as the winner in all five Republican presidential primaries held on Tuesday – a clean sweep that illustrates Trump’s dominance along the Eastern Seaboard.

In the Democratic race, former Secretary of State Hillary Clinton has been projected as the winner in Maryland, Pennsylvania and Delaware.

Their victories were all projected by the Associated Press, using exit polls and early returns.

Of the 10 races held on Tuesday – two primaries each in five states – the only races that remain too close to call are two Democratic primaries: Connecticut and Rhode Island. Sen. Bernie Sanders (Vermont) was ahead of Clinton in early returns from both states, though his lead was very narrow in Connecticut.

In both parties, these results will extend the front-runner’s advantage in convention delegates. But they are also important as illustrations of momentum.

In the GOP race, Trump appeared to be trouncing his rivals by huge margins, winning by 30 percentage points or more in the first returns. Wins on that scale will make it harder for rivals like Sen. Ted Cruz (Texas) and Ohio Gov. John Kasich to argue that Trump is a weak and divisive front-runner.

That idea is key to both men’s long-shot strategies, which imagine that Trump can be stopped from reaching a majority of Republican delegates, and that the party’s convention will bypass the leader and choose one them instead.

Trump was attending the TIME 100 Gala in New York tonight with his wife. Outside, he told a CBS News reporter that he could unify the party after he locks up the GOP nomination: “It has been fractured, but it’ll be amazing how quickly it’ll be unified.”

He also encouraged Kasich and Cruz of Texas to drop out.

Even before the polls closed Tuesday night, Cruz was conceding the expected losses, however, he showed no indication of withdrawing from the race.

“Tonight, Donald Trump is expected to have a good night,” he said, speaking to supporters in Knightstown, Indiana. But then Cruz said that the race would turn his way, in states like Indiana: “Tonight this campaign moves back to more favorable terrain.”

Kasich was running second in several of Tuesday’s primaries, but it was a distant second: hardly an affirmation of the theory that Kasich would compete well with Trump among the more moderate Republicans of the East. In campaign parlance, Kasich was “down” on Tuesday night: he was back in Ohio, and did not make a public statement or speech.

For Clinton, Tuesday’s victories in large, urban states reinforced her case against Sanders: that he has not broadened his coalition much beyond white liberals, and that he struggles to win urban areas and populous states.

Sanders, however, showed no signs of giving up.

The senator from Vermont appeared shortly after 8 p.m. to boisterous cheers in an arena in Huntington, West Virginia, choosing to hold an election-night rally in a state that holds its primary in two weeks.

“This campaign is not just about electing a president. It is about transforming our nation,” Sanders said at the outset of his remarks to a crowd of about 6,400. “It is about having the courage to demand a political revolution, and you are the revolutionaries.”

Sanders remained upbeat despite exit polls in Maryland showing voters by a 3-to-1 margin thought Clinton was the better candidate to beat Trump in the general election. The polls also showed Clinton leading Sanders by a huge margin – more than 50 points – among black voters, who made up almost half of the Democratic electorate. That appeared to show that Sanders is still struggling to attract African American support, even after months of concerted outreach. Ahead of the Maryland primary, for instance, he spoke to a crowd in downtown Baltimore, decrying police brutality and statistics showing lower life expectancy in some black neighborhoods.

After a winning streak that started in late March, Sanders’s momentum stalled considerably after Clinton’s decisive victory in New York. But Sanders gave no indication that he is giving up: His campaign sent out a fundraising solicitation Tuesday that included a photo of Hillary and Bill Clinton attending Donald Trump’s wedding.

Tad Devine, Sanders’s senior strategist, said Sanders and his top aides plan to talk Wednesday about how his path to the nomination has been affected by Tuesday’s results but said he sees no scenario where Sanders drops out. Devine said no formal meeting has been scheduled.

“Is our path to the nomination affected by five states voting? Yes,” Devine said. “Is something dramatic going to happen? No, I don’t think so.”

For her part, Clinton shows no signs of expecting Sanders to drop out. She spent Tuesday in Indiana, the next battleground.

The Rust Belt states of the Midwest have been tricky for Clinton: She narrowly won in Ohio and lost, unexpectedly, in Michigan.

Between Clinton’s Michigan loss and the Ohio primary, the Clinton campaign retooled its message on trade, adding some meat to the bones of her opposition to the Trans Pacific Partnership and focusing special attention to local trade issues. That’s essentially the message Clinton touted in Indiana on Tuesday afternoon while speaking at Munster Steel in Hammond.

“I’m saying to CEOs who think they can make a quick buck by turning their back on our country.. .we are not going to let you take advantage of us anymore,” Clinton said. “I’m going to stand up to both CEOs at home and China abroad.”

She promised to make the “survival” of the steel industry on of her “top” priorities.

Still, Clinton has emphasized that she has won millions more votes than Sanders in the primary and appeared to be moving past him – taking a swipe at Trump for flying into parts of the country on a “big jet,” painting him as an out-of-touch magnate ensconced in the towers bearing his name.

“Donald Trump says wages are too high in America and he doesn’t support raising the minimum wage,” Clinton said Monday. “I have said, come out of those towers named for yourself and actually come out and talk and listen to people.

Trump, who has stirred outcries over remarks about women during the campaign, took sharper aim at Clinton, declaring that she would be a “terrible president” who is playing up the fact that she is a woman.

“I call her crooked Hillary because she’s crooked and the only thing she’s got is the woman card. That’s all she’s got. . . . It’s a weak card in her hands,” Trump said on Fox. “I’d love to see a woman president, but she’s the wrong person. She’s a disaster.”

Trump also blasted his remaining two GOP presidential rivals after they announced an agreement Sunday to coordinate in upcoming primary contests with the aim of preventing Trump from securing the nomination.

“Honestly, it shows such total weakness, and it’s pathetic when two longtime insider politicians – establishment guys, whether you like it or not – have to collude, have to get together to try to beat a guy that really speaks what the people want,” Trump said during a campaign event in Warwick, Rhode Island, on Monday.

The Cruz-Kasich alliance ran into its own speed bumps that exposed the plan’s risks and called into question whether it would work.

In their unconventional last-ditch scheme, Kasich said he would clear the way for Cruz to face Trump in Indiana while Cruz would return the favor in Oregon and New Mexico. The plan aimed to produce what anti-Trump Republicans have yearned for since the fall: a one-on-one showdown with the mogul.

But less than 12 hours after the pact was announced, Kasich undercut the idea by declaring Monday that his supporters in Indiana should still vote for him. The Ohio governor also plans to keep raising money in the state and to meet with Republican Gov. Mike Pence.

Kasich grew testy on NBC’s show Tuesday when asked about the deal, saying: “I think you’re having a hard time figuring this out.”

He still did not tell voters to cast a ballot for Cruz.

“I have laid out a strategy and I have not told anybody to not vote for me,” Kasich said Tuesday, noting that he just isn’t campaigning in Indiana. “I don’t tell people how to vote.”

Cruz repeatedly said that Kasich was “pulling out” of the state. A super PAC supporting the senator from Texas also said it would continue to air an anti-Kasich ad in the state – a sign the Cruz camp fears Kasich could still peel away enough support to sink Cruz’s chances in Indiana.

When asked on WIBC in Indianapolis if the agreement could lead to a Cruz-Kasich ticket, the Texas senator balked.

“I think that is very, very premature,” Cruz said. The candidate has said his campaign is vetting vice presidential nominees, but declined to name them. Instead, the alliance has to do with “allocation of resources.”

Both men focused on the idea that they are trying to prevent Clinton from becoming president.

“I’m not out to stop Donald Trump. I’m out to stop Hillary Clinton,” Kasich said, asserting that Trump has “zero” chance of beating Clinton.

“If you don’t want to hand the election to Hillary Clinton, do not vote, I ask you, for Donald Trump, but if you want to beat Donald Trump, don’t vote for John Kasich either,” he said on WPHT radio in Philadelphia on Tuesday.

The Texas senator conceded that Trump may have a “good day” in Tuesday’s contests. Cruz has moved on from the Northeast and Mid-Atlantic. The tumult between Cruz and Kasich fueled doubts about the arrangement among voters and Republican elites, who worried that Cruz and Kasich have handed Trump a ready-made argument that the party establishment is plotting against him.