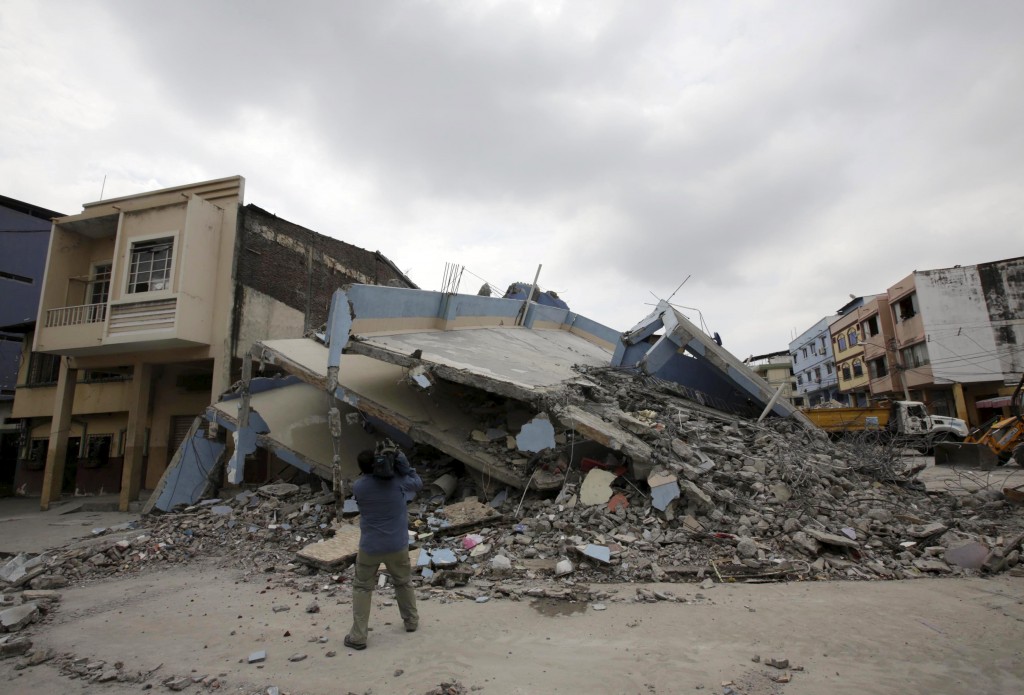 Traumatized Ecuadoreans rested amid the rubble of their homes and rescuers dug for survivors on Monday after an earthquake smashed the Andean nation’s coastal region, killing at least 350 people.

At least 2,068 people were also injured in Saturday’s 7.8-magnitude quake, which ripped apart buildings and roads and knocked out power.

In the devastated beach town of Pedernales, shaken survivors curled up on mattresses or plastic chairs next to their flattened homes. Soldiers and police patrolled the hot, dark streets overnight while pockets of rescue workers plowed on.

At one point, firefighters entered a partially destroyed house to search for three children and a man apparently trapped inside, as a crowd of 40 gathered in the darkness to watch.

“My little cousins are inside. Before, there were noises, screams. We must find them,” pleaded Isaac, 18, as the firemen combed the debris.

Tents sprung up in the town’s still-intact stadium to store bodies, treat the injured, and distribute water, food and blankets to survivors. People wandered around with bruised limbs and bandaged cuts, while patients with more serious injuries were evacuated to hospitals.

President Rafael Correa cut short a visit to Italy to fly straight into the disaster zone.

“Ecuador has been hit tremendously hard,” Correa said in a broadcast address Sunday night, his voice breaking as he said he feared the death toll would rise.

While the full extent of the damage remains unclear, the disaster will likely worsen the OPEC nation’s economic performance this year. The small, oil-dependent country has already been battered by the tumble in crude prices.

Its energy industry appeared largely intact after the quake, though the main refinery of Esmeraldas was closed as a precaution. However, exports of bananas, flowers, cacao and fish could be slowed by ruined roads and port delays.

The quake could also alter political dynamics ahead of next year’s presidential election.

The government’s response seemed relatively speedy, with Vice President Jorge Glas flying into the disaster zone within hours. But some survivors complained about lack of electricity and supplies, and aid had still not reached some areas.

About 230 aftershocks have rattled survivors, who huddled in the streets, worried the flow of tremors could topple their already cracked homes.

Some 130 inmates in Portoviejo took advantage of the quake’s destruction and chaos to climb over the collapsed walls of the low-security El Rodeo prison. More than 35 prisoners had been recaptured, authorities said Sunday night.

On Monday, people swarmed into the middle of Portoviejo in search of any materials of value among destroyed buildings, including a social security office. Desks and papers lay strewn around the floor as locals carried off aluminum window frames and cables.

About 13,500 security personnel were mobilized to keep order.

Some $600 million in credit from multilateral lenders was immediately activated for the emergency, the government said.

Domestic aid funds were being set up and Venezuela, Chile and Mexico were sending personnel and supplies.

The Ecuadorean Red Cross mobilized more than 800 volunteers and staff and medical charity Medecins Sans Frontieres said it was sending a team from Colombia.

Two Canadians were among the dead. Jennifer Mawn, 38, and her 12-year-old son, Arthur, died when the roof of their coastal residence collapsed.

Residents on the Galapagos islands, far off Ecuador’s coast and home to numerous rare species, said they had not been affected by the quake.

The tremor followed two large and deadly quakes that have struck Japan since Thursday. Both countries are located on the seismically active “Ring of Fire” that circles the Pacific, but the U.S. Geological Survey says large quakes separated by such distances would probably not be related.