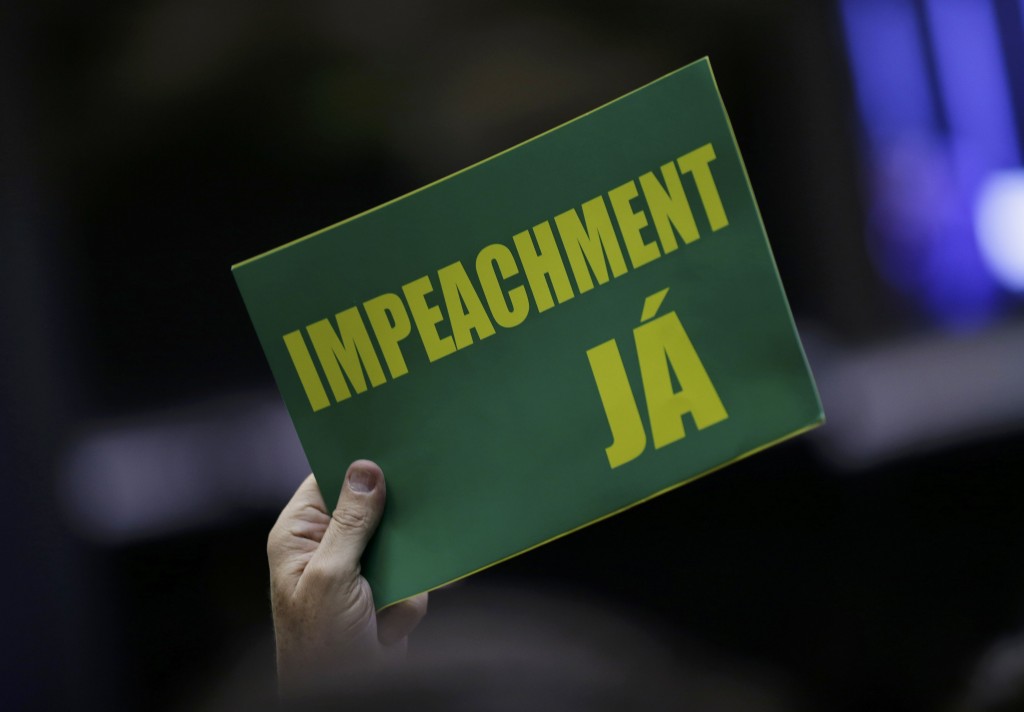 The future of Brazilian President Dilma Rousseff hung in the balance Sunday night as legislators slowly voted on whether to impeach the embattled leader or let her finish a term that goes through 2018.

After more than 40 hours of debate that began Friday, legislators in the lower Chamber of Deputies began voting one by one Sunday evening, the culmination of months of political wrangling that exposed deep polarization in Latin America’s largest nation and most powerful economy.

Eduardo Cunha, the house speaker leading the impeachment push, called the other 512 deputies individually, giving them time to speak before casting their vote. After each vote, both cheers and boos erupted while legislators looked up at a board keeping score.

With 200 votes cast, 155 had voted in favor of impeachment, and 45 had voted against or abstained.

Luiz Carlos Hauly, a deputy in the Social Democratic Party, the main opposition party, said Rousseff had to go.

“Given that Dilma didn’t commit any crime, like so many others in this chamber, which has no shame, I’m voting ‘no!’,” she said.

The extraordinary session came as the government is paralyzed and the population sharply divided, with friends and foes of Rousseff dismissing each other as “putchists” and “thieves.”

If 342 of the lower house’s 513 lawmakers vote in favor of the impeachment Sunday, the proceedings would move to the Senate, where a separate vote to hold a trial could suspend Rousseff and hand over the top job to Vice President Michel Temer, whom Rousseff has accused of being part of the push against her.

If lawmakers voted against impeachment, the bid to oust Rousseff would be dead and any subsequent effort would have to start over from scratch.

Brazil’s president faced impeachment over allegations she broke fiscal laws. Her detractors describe the sleight-of hand accounting as a bid to boost her government’s floundering popularity amid a tanking economy and a corruption scandal so widespread it has taken down top public figures from across the political spectrum as well as some of the country’s richest businessmen.

Rousseff denied wrongdoing, pointing out that previous presidents used similar accounting techniques. The allegations, she insisted, were part of a “coup” spearheaded by Brazil’s traditional ruling elite to snatch power back from her left-leaning Workers’ Party, which has governed the past 13 years.

Outside the legislature, waves of pro- and anti-impeachment demonstrators flooded into the capital of Brasilia from across the huge nation. A metal wall more than a mile long was installed to keep the rival sides safely apart.

People on both sides watched the score on large video screens, cheering or booing in accordance with their political leanings.

Patricia Santos, a retired 52-year-old schoolteacher outside Congress, said she was fed up with the status quo and wanted Rousseff out.

“We want our politicians to be less corrupt, so we hope impeaching her will send a signal to them all,” Santos said. “We know that all the parties are involved in the corruption but the (governing) Workers’ Party has been the leaders of this all for the last 13 years, so they have to go.”

Many of the people pushing to oust Rousseff face serious allegations of wrongdoing themselves. About 60 percent of the 594 members of Congress are facing corruption and other charges.

Temer, a 75-year-old with the Brazilian Democratic Movement, a party bereft of any concrete ideology that has a reputation for backroom wheeling and dealing, has tried to cast himself as a statesman above the fray and a unifying force that can heal a scarred nation.

However, he has been linked to the corruption scheme centered at the state-run Petrobras oil company. Also, because he signed off on some of the administration’s questioned accounting maneuvers, Temer could later potentially face impeachment proceedings.

The second in line to replace Rousseff is Cunha, the house speaker and long-time Rousseff enemy. He is facing money laundering and other charges for allegedly accepting some $5 million in kickbacks in connection with the Petrobras scheme and could also be stripped of office over allegations he lied when he told a congressional committee he didn’t hold any foreign bank accounts. Documents later emerged linking him and his family to Swiss bank accounts.

Under the special legal status afforded to Brazilian legislators and other top politicians, they must be tried by the Supreme Court, largely shielding them from prosecutions.