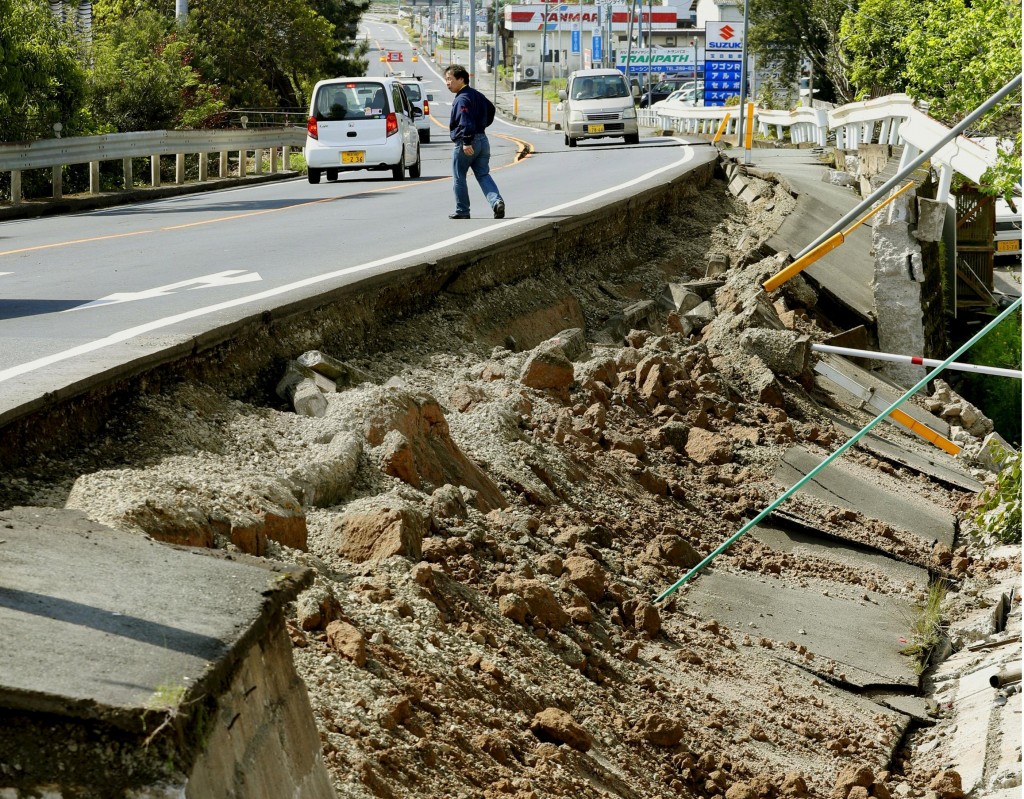 Aftershocks rattled southwestern Japan on Friday after a strong quake the night before killed nine, injured at least 1,000 and left thousands without power or water, though nuclear plants in the area avoided damage.

By afternoon, more than 130 aftershocks had hit the area around the city of Kumamoto in the wake of the initial 6.4 magnitude quake the night before. Officials said the frequency was tapering off but the risk of further strong aftershocks will remain for about a week.

While the magnitude of Thursday’s quake was much lower than that of the 9.0 March 11, 2011 quake that touched off a massive tsunami and nuclear meltdowns at Fukushima, the intensity was similar because it struck on land and at a much shallower depth.

More than 44,000 people initially fled to schools and community centres, some spending the night outside after the first quake hit around 9:30 p.m.

Roads cracked, houses crumbled, and tiles cascaded from the roof of the 400-year-old Kumamoto Castle in the center of the city.

“We managed to huddle into a space, that’s why we were saved,” one man told NHK national media after he and his family were rescued from their collapsed house two hours after the quake hit. “We’re all safe; that’s what counts.”

Among those pulled from the wreckage was a five-month-old baby girl, wrapped in a blanket and passed hand to hand by firefighters. Several hospitals had to evacuate patients.

More than 3,000 troops, police and firemen were dispatched to the area from around Japan, and Prime Minister Shinzo Abe said more would be sent if needed.

“We will do everything in our power to ensure the safety of local residents,” Abe told a parliamentary committee.

Most of the dead came from Mashiki, a town of around 34,000 people near the epicenter of the quake, where firefighters battled a blaze late on Thursday. Daylight showed splintered houses under tiled roofs and an apartment building, whose ground floor was pulverized, where two people died.

“I want to go home, but we couldn’t do anything there,” one boy at an evacuation center told TBS television as he bounced a baby in his arms.

Though the intensity of Thursday’s quake on the Japanese scale matched that of the March 2011 quake that left nearly 20,000 dead, the absence of a tsunami helped keep the death toll down.

Service on the Shinkansen superfast train in Kyushu was halted after one train derailed, and highways were closed after some sections collapsed. About 12,200 households were without electricity as of 12 p.m. local time, according to Kyushu Electric Power Co Inc, while some 58,000 lacked water.

The Nuclear Regulation Authority said there were no irregularities at three nuclear plants on the southern major island of Kyushu and nearby Shikoku.