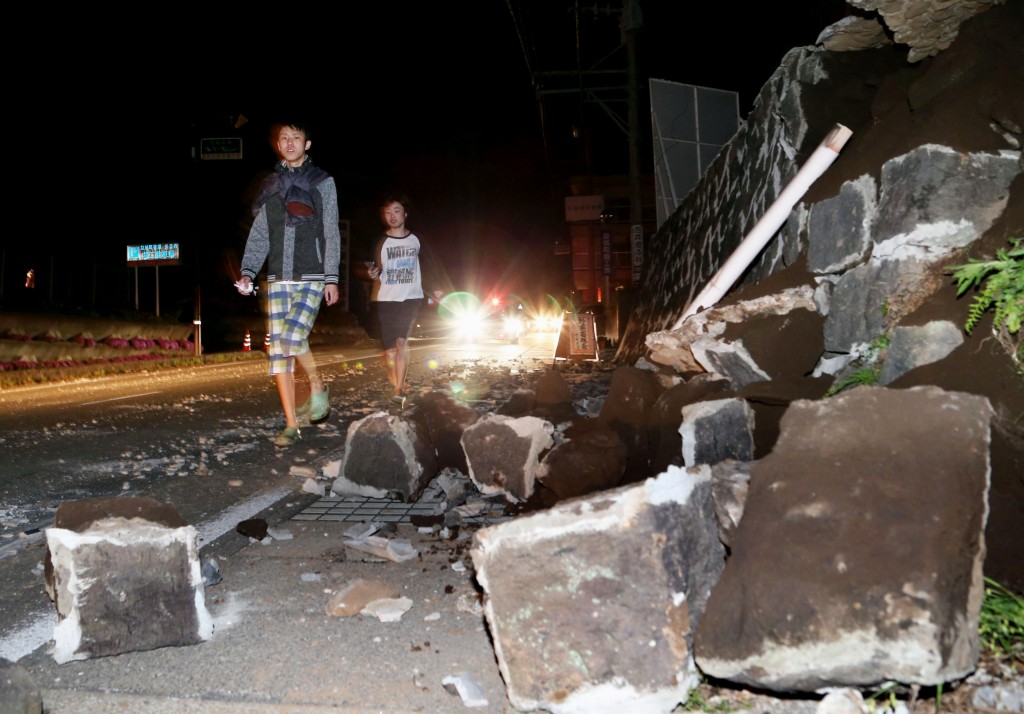 At least two people were killed and 45 injured when a powerful earthquake with a magnitude of 6.5 knocked down houses and buckled roads in southern Japan on Thursday night.

The quake struck at 9:26 p.m. at a depth of 7 miles near Kumamoto city on the island of Kyushu, the Japan Meteorological Agency said.

Both fatalities were from the hardest-hit town of Mashiki, about 9 miles east of Kumamoto city (and about 800 miles southwest of Tokyo), said Kumamoto prefecture disaster management official Takayuki Matsushita.

Japan’s Chief Cabinet Secretary Yoshihide Suga said at least 19 houses had collapsed. “Because of the night darkness, the extent of damage is still unclear,” he said.

“There was a ka-boom and the whole house shook violently sideways,” Takahiko Morita, a Mashiki resident said in a telephone interview with Japanese broadcaster NHK. “Furniture and bookshelves fell down, and books were all over the floor.”

Morita said some houses and walls collapsed in his neighborhood, and water supply had been cut off.

Suga said there no abnormalities at nearby nuclear facilities. The epicenter was 74 miles northeast of the Sendai nuclear plant, the only one operating in the country.

NHK showed Mashiki town hall in the dark after having lost power. Other footage showed rubble on the road, shards of glass and broken windows, and fire breaking out in some places, with firefighters battling an orange blaze.

Keisukei Urata, an official in nearby Uki city who was driving home when the quake struck, told NHK that parts of the ceiling at Uki City Hall collapsed, windows broke and cabinets fell to the ground.

Kasumi Nakamura, an official in the village of Nishihara, said that the rattling started modestly and grew violent, lasting about 30 seconds.

“Papers, files, flower vases and everything fell on the floor,” he told NHK.

There were multiple aftershocks, the largest one with a preliminary magnitude of 6.4 shortly after midnight, according to the Japan Meteorological Agency.