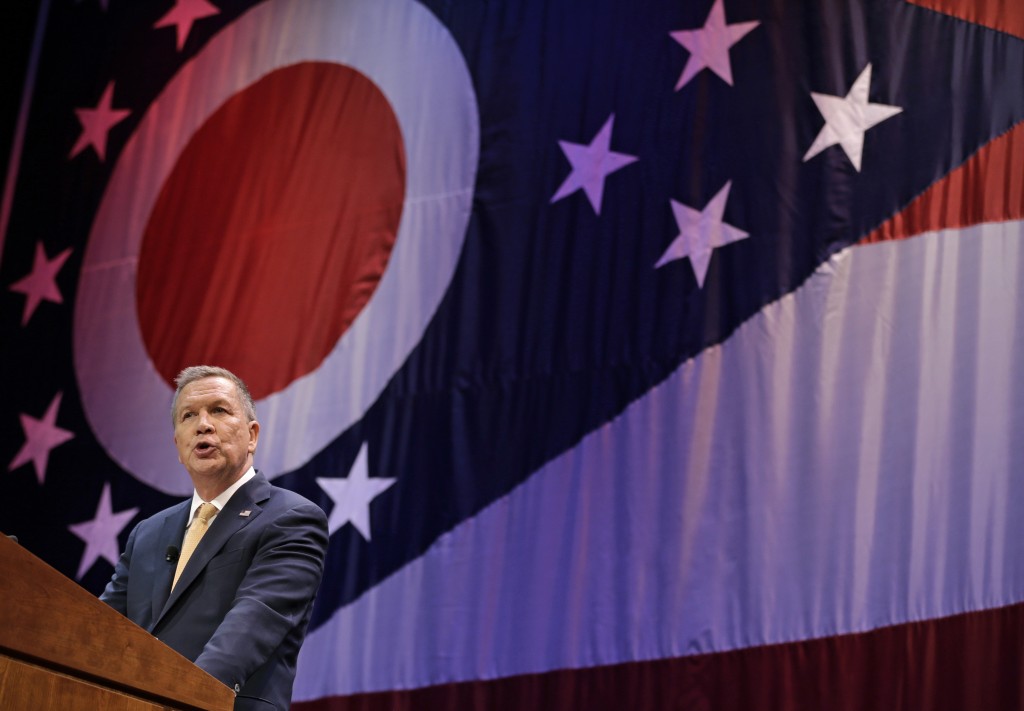 Governor John Kasich wasted no time returning to the presidential campaign trail a day after sounding a unifying theme to Ohio and the nation in his annual State of the State address.

The Republican presidential hopeful, who is trailing his two competitors, was scheduled to campaign in New York on Thursday, a day after he took his positive campaign vibe back to his home state.

In the roughly hour-long speech, Kasich called for a host of legislative actions, including accelerating income-tax cuts, taking a hard look at congressional redistricting and promoting more arts education in schools.

Kasich said his state “is getting stronger every day” and is setting an example for the nation by solving tough problems with ingenuity and cooperation.

Kasich might have been off the presidential campaign trail temporarily, but some of the scenes at the speech weren’t far removed. Kasich walked onto the stage carrying a legislator’s baby. He then posed for a picture with Republican legislative leaders before beginning his address.

Kasich returned to the familiar theme of his efforts to pull Ohio from economic hard times when he took office in 2011, and he said the state is leading the way with its innovations in education, Medicaid expansion, job creation and training, police-community relations and supporting legislative redistricting reform. Kasich said he’d like to see the Ohio Legislature take up congressional redistricting, too.

“Ideas and merit should be what wins elections, not gerrymandering,” he said. “When pure politics is what drives these kinds of decisions, the result is polarization and division. Haven’t we had enough of that?”

Republican legislative leaders were lukewarm on the idea.

Kasich said the credit for Ohio’s accomplishments extends beyond the governor.

“Make no mistake, it’s not just me behind the steering wheel,” he told a crowd of about 1,000. “We’re all in this together, and we are all responsible for keeping Ohio moving forward toward our goal.”

He said everyone has unique gifts and should be encouraged to find his or her greater purpose “to literally live a life better than ourselves and to make a commitment to lift the world.”

Democrats expressed skepticism over Kasich’s moderate tone in the speech.

“John Kasich can keep pretending he’s different from Donald Trump and Ted Cruz, but the fact is that his governorship has been a failure and his policies have always been just as extreme as the rest of his party,” said TJ Helmstetter, spokesperson for the Democratic National Committee.

Democrats in the state Legislature said Kasich’s policies have disproportionately shifted the state’s tax burden to local communities and school districts, hurting fire, police and other services. They called on Kasich to specify ways that he plans to pay for his proposals, such as more arts classes and guidance counselors in schools, while once again cutting taxes.

Senate Democratic Leader Joe Schiavoni, of Boardman, said he was still waiting to see the kind of governor that Kasich portrays himself to be on the presidential campaign trail.

“Actions speak louder than words,” he said. “And we have a few years left to see if John Kasich, our governor, is the governor that he’s been for the past six years or if he’s this new governor-slash-presidential candidate that wants to really, truly do work across the aisle and build consensus and work in a collaborative process. I hope he is and I hope he does. And I hope we do it immediately.”

Kasich said tax changes he’ll propose by the end of the year will include the income-tax acceleration as well as changes that better align Ohio’s tax code with the modern economy.

He also laid out a series of steps for dealing with the opiate abuse epidemic that’s plaguing the state, including registering pharmacy technicians to track bad ones.

He said the state also needs to restrict high-volume painkiller prescriptions. Each prescription should be filled within 90 days and any prescription that hasn’t been taken to the pharmacy within 30 days should be invalidated, he said. His plan also calls for intensifying scrutiny on new drug treatment clinics.

Kasich also announced a new Military Family Opportunity Scholarship which will help allow children of active-duty military families attend private elementary and secondary schools if that’s what they deem best for their children, noting the state will review ways to expand the new scholarships to children of veterans and to children of members of the Ohio National Guard and the Reserves.

About a dozen people protested outside the theater before the address.