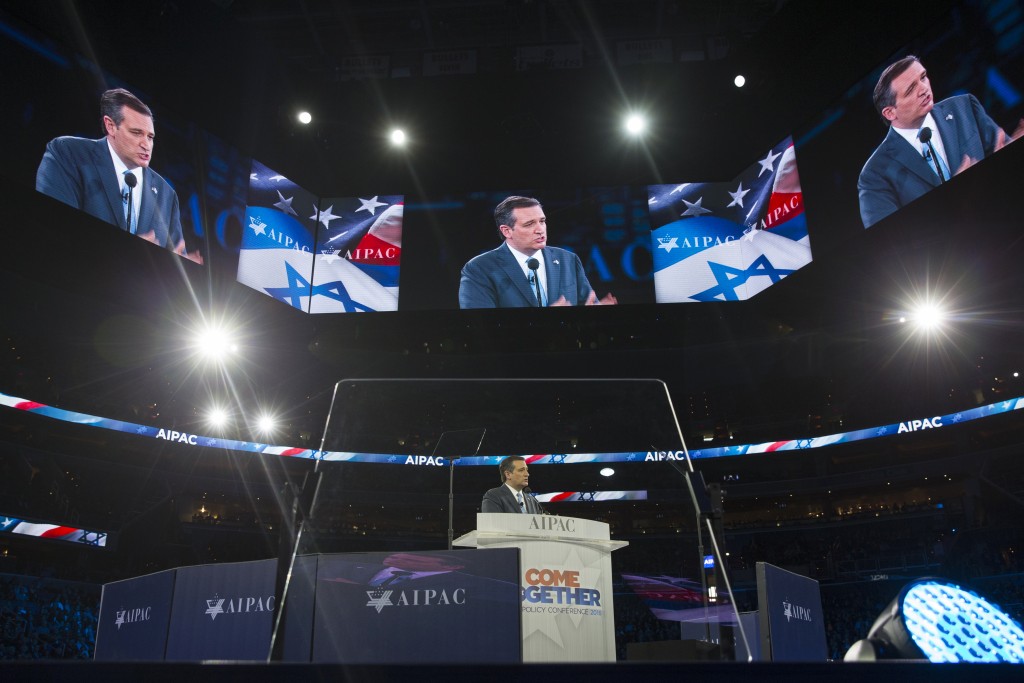 Republican presidential front-runner Donald Trump focused on Iran as he delivered a highly anticipated speech to a major pro-Israel lobby. Speaking from prepared remarks, a rarity for the businessman who usually speaks off-the-cuff using hand-scrawled, point-form notes, Trump told a gathering of AIPAC, the American Israel Public Affairs Committee: “Iran is the biggest sponsor of terrorism around the world.”

He repeatedly bashed Democratic rival Hillary Clinton, and slammed the United Nations, deeming the international body “not a friend” of democracy, freedom, the United States or Israel. Trump said he would veto any attempt by the U.N. to impose its will on the Jewish state.

On the subject of the Israel-Palestinian conflict, Trump said “each side” in the conflict “must give up something” for a peace deal to work, but that a deal that “imposes conditions” on the two sides will “do nothing to bring peace.”

“It will only further delegitimize Israel and it would reward Palestinian terrorism,” Trump said.

On the heels of Trump’s speech, his political rival Ted Cruz began by calling Trump out on a reference to “Palestine” in his speech.

“Palestine has not existed since 1948,” Cruz began in his speech Monday to applause from the crowd in Washington. Trump made at least three references to “Palestine.”

House Speaker Paul Ryan hammered the Obama administration in his address to AIPAC, telling America’s leading pro-Israel group that the agreement legitimized Iran’s nuclear program instead of dismantling it.

“I think it was a terrible deal. Worst in our lifetime,” Ryan said. “Iran got billions of dollars in sanctions relief, and in exchange for what? For taking apart some — not all, just some — of its nuclear program.”

The Wisconsin Republican also announced that his first overseas trip as House speaker will be a return visit to Israel.

He called for resisting any attempts by countries to target Israel with politically motivated boycotts and sanctions.

“I don’t need on the job training,” he stated. The Ohio governor also stressed his “firm and unwavering” support for Israel and vowed to work to stamp out intolerance, racism and anti-Semitism.

But some of his loudest applause came as he appeared to take on Trump. “We are Americans before we are Republicans and Democrats,” he said, adding: “I will not take the low road to the highest office in the land.”

“We need steady hands,” she told the crowd. “Not a president who says he’s neutral on Monday, pro-Israel on Tuesday and who-knows-what on Wednesday because everything’s negotiable.”

Israel’s security, she proclaimed to loud applause, “is non-negotiable.”

The AIPAC annual policy conference draws many Jewish leaders from across the world. It is a traditional stop for U.S. politicians eager to demonstrate their foreign policy credentials by wading into Middle East conflicts.

Trump has a mixed record with pro-Israel Republicans. He’s refused to make the perennial Republican campaign promise to move the U.S. Embassy from Tel Aviv to Yerushalayim, drawing boos last year from the Republican Jewish Coalition.

Socially conscious Jews object to his controversial remarks about Mexican immigrants, women and Muslims, with some drawing analogies to the European persecution of Jews in the Holocaust.

Clinton, who received a standing ovation from the group, has a long history in the Middle East, including overseeing as secretary of state the Obama administration’s first attempt to broker Israeli-Palestinian peace. Her stance against Jewish communities in Yehudah and Shomron has been criticized by some in the pro-Israel community, but she has been received warmly by pro-Israel groups in the past.

She renewed promises to provide sophisticated defense technology to Israel and to quickly invite the country’s prime minister to the White House, if elected president. And she offered subtle criticism of the Obama administration, which has had public rifts with Israeli Prime Minister Binyamin Netanyahu.

Sanders — who is trying to become the first Jewish candidate to win a major party’s presidential nomination — skipped the AIPAC meeting to campaign ahead of primaries in Utah and Arizona on Tuesday. He delivered a foreign policy address in Salt Lake City, which he said is the one he would have delivered before the pro-Israel lobbying group. Clinton, who addressed AIPAC earlier in the day, held a get-out-the-vote event in Phoenix.

Sanders said the U.S. should have unwavering support for Israel but any Middle East peace solution must recognize civil rights of the Palestinian people. He criticized Israeli Prime Minister Benjamin Netanyahu’s administration for the construction of Jewish communities in Yehudah and Shomron and for withholding tax revenues from Palestinians. But he criticized leaders of Hamas and the organization’s attacks on Israel.

Sanders said he’s the only presidential candidate with personal ties to Israel, and noted that he worked on a kibbutz as a young man.

Outside the venue, anti-Trump protesters gathered to voice anger over Trump’s brash political rhetoric and his attendance at the conference.