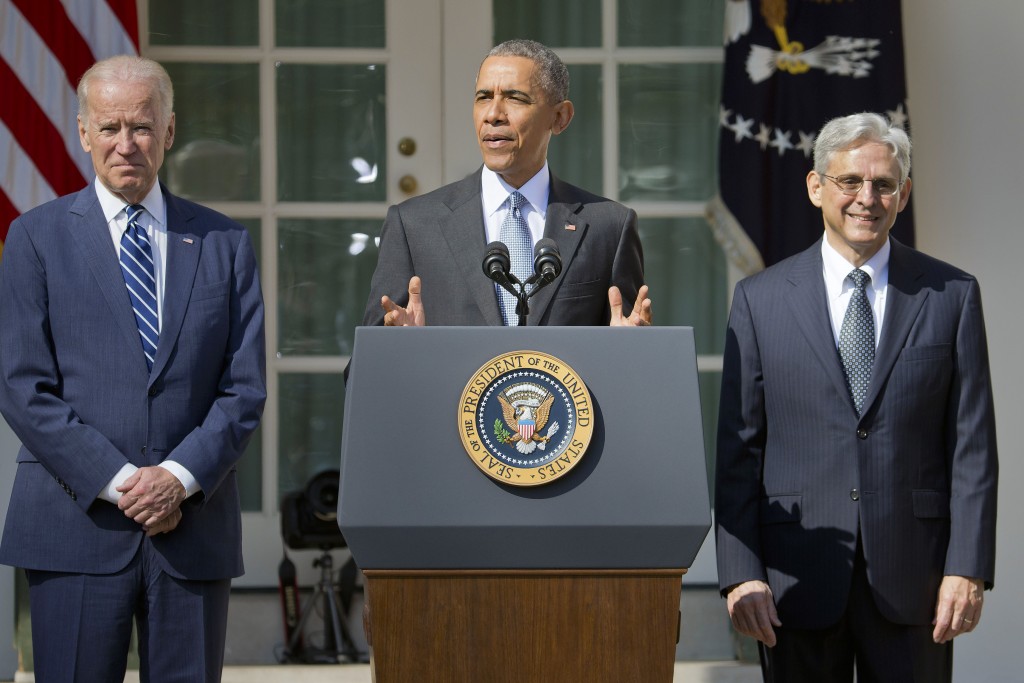 Speaking at the Rose Garden, flanked by Garland and Vice President Joe Biden, Obama said that Garland is uniquely qualified to serve on the Court immediately.

Obama said that Garland earned a scholarship to Harvard, put himself through law school and went on to become a partner at a law firm in just four years. He said that Garland then made the highly unusual choice of giving that up and accepting a job as a federal prosecutor, as crime was rampant in Washington D.C., and Garland wanted to help.

Obama noted that Garland oversaw the federal government’s response to the deadly bombing in Oklahoma City in 1995. Obama said the case informed his view that the law is more than an intellectual exercise and that he believes in protecting the basic rights of every American.

Garland has served for 19 years on the United States Court of Appeals for the District of Columbia Circuit and became its chief judge in 2013. Obama said, “I chose a serious man and an exemplary judge.”

Garland spoke after Obama. Choking back tears, Garland called the nomination “the greatest honor of my life.” He described his grandparents’ flight from anti-Semitism in Eastern Europe and his modest upbringing.

He said he viewed a judge’s job as a mandate to set aside personal preferences to “follow the law, not make it.”

In announcing the nomination, Obama said he went through a rigorous and comprehensive process to pick his nominee. He said he sought to set aside short-term expediency and “narrow politics,” and that Garland would bring a spirit of modesty, integrity and even-handedness to the Supreme Court.

The president also said he reached out to every member of the Senate Judiciary Committee to seek advice about the nomination.

Garland, 63, is the chief judge for the United States Court of Appeals for the District of Columbia Circuit, a court whose influence over federal policy and national security matters has made it a proving ground for potential Supreme Court justices.

Obama quoted past praise for Garland from Chief Justice John Roberts and Sen. Orrin Hatch. And he said Garland’s talent for bringing together “odd couples” made him a consensus candidate best poised to become an immediate force on the nation’s highest court.

Obama noted that Garland was confirmed to the D.C. Circuit in 1997 with backing from a majority in both parties, including seven current Republican senators.

Senate Minority Leader Harry Reid, who spoke to Obama Wednesday morning, said in brief remarks on the Senate floor that Republicans must act on the president’s choice. “He’s doing his job this morning; they should do theirs,” said the Nevada Democrat.

If confirmed, Garland would be expected to align with the more liberal members, but he is not viewed as down-the-line liberal. Particularly on criminal defense and national security cases, he’s earned a reputation as centrist, and one of the few Democratic-appointed judges Republicans might have fast-tracked to confirmation – under other circumstances.

But in the current climate, Garland remains a tough sell. Republicans control the Senate, which must confirm any nominee, and GOP leaders want to leave the choice to the next president, denying Obama a chance to alter the ideological balance of the court before he leaves office next January. Republicans contend that a confirmation fight in an election year would be too politicized.

After Scalia died suddenly on Feb. 13, Senate Majority Leader Mitch McConnell and Judiciary Committee Chairman Charles Grassley said that his replacement should be decided by the next president, not by a lame-duck Obama.

The White House planned to highlight Hatch’s past support, as well as other glowing comments about Garland from conservative groups.

President Bill Clinton first nominated him to the D.C. Circuit in 1995.

His prolonged confirmation process may prove to have prepared him for the one ahead. Garland waited 2½ years to win confirmation to the appeals court. Then, as now, one of the men blocking his path was Grassley, who argued he had no quarrel with Garland’s credentials, but a beef with the notion of a Democratic president trying to fill a court he argued had too many seats.

After Obama announced Garland’s nomination in the Rose Garden on Wednesday morning, Grassley released a statement affirming his opposition to granting Garland a hearing:

The power to nominate an individual to the Supreme Court is granted to the President and authority is given to the Senate to provide advice and consent,” said Grassley. “Nowhere in the Constitution does it describe how the Senate should either provide its consent or withhold its consent … Today the President has exercised his constitutional authority. A majority of the Senate has decided to fulfill its constitutional role of advice and consent by withholding support for the nomination during a presidential election year, with millions of votes having been cast in highly charged contests.”

“A lifetime appointment that could dramatically impact individual freedoms and change the direction of the court for at least a generation is too important to get bogged down in politics. The American people shouldn’t be denied a voice. Do we want a court that interprets the law, or do we want a court that acts as an unelected super legislature? This year is a tremendous opportunity for our country to have a sincere and honest debate about the role of the Supreme Court in our constitutional system of government.”

“This has never been about who the nominee is,” read Ryan’s statement. “It is about a basic principle. Under our Constitution, the president has every right to make this nomination, and the Senate has every right not to confirm this nominee. I fully support Leader McConnell and Chairman Grassley’s decision not to move forward with the confirmation process. We should let the American people decide the direction of the Court.”