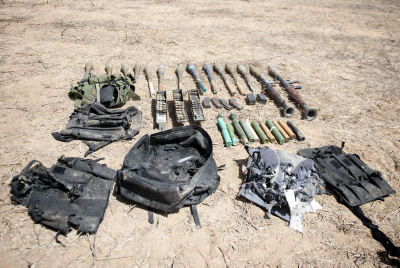 In a joint operation last Thursday night, IDF soldiers and Shin Bet agents raided a house in the Jenin area that was used to manufacture weapons. The forces discovered over a dozen rifles, which could be used by sharpshooters to fire at Israelis, the organizations released for publication Sunday. The information on the location of the weapons was extracted from a terrorist who was questioned by security officials last week, the Shin Bet said.

The Shin Bet said that the seizure was part of an ongoing operation over the past several months in which security officers had tracked down dozens, if not hundreds, of weapons that Arab terrorists had prepared for use against Israeli civilians.

Early Sunday, IDF soldiers surrounded and blocked the entrances and exits to the Arab village of Beit Ur a-Tahta, adjacent to Road 443, as they searched for a terrorist who assisted a second Arab in setting a brush fire Friday. The fire was set deliberately, apparently with the intention that it reach the Dor Alon gas station and set off an explosion, security forces said. The terrorist had taken shelter in the village, the IDF said.

Also Sunday, Arabs threw stones at Israeli vehicles driving on Road 443, the Modi’in-Yerushalayim road. There were no injuries, but one car was damaged in the attack. The attack took place east of the Dor Alon gas station on Road 443.

Overnight Motzoei Shabbos, security officials said they had arrested 15 wanted security suspects in Yehudah and Shomron. The suspects were wanted for participating in rioting and throwing stones and firebombs that endangered Israeli civilians and IDF soldiers. Several of the suspects were also charged with belonging to Hamas. All were being questioned on their activities by security forces.