Politics Trump Pivots to General Election, in His Own Unorthodox Way
Politics 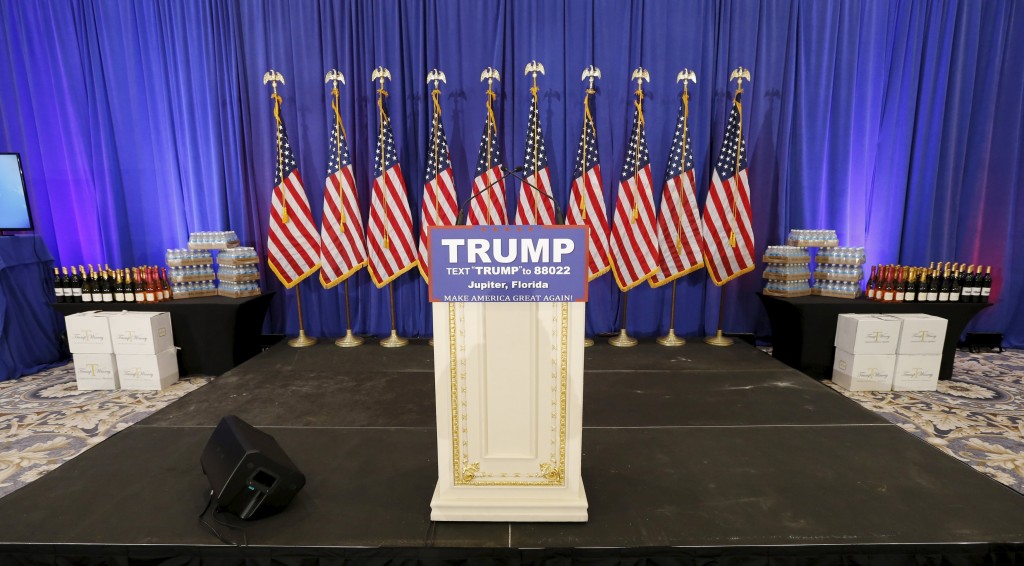 In his own unorthodox way, Donald Trump is unmistakably evolving into a general election candidate.

The over-the-top billionaire is talking about flexibility in his hard-line immigration policies. He’s pledging to moderate his bullying tone, acknowledging that some people may be turned off by his brash brand of politics. And he’s working to assume the mantle of GOP standard-bearer, calling for party unity and promising to help fellow Republicans win their own elections in November.

“It’s very, very important as a Republican that our senators and congressmen get reelected,” Trump said Tuesday during a late-night news conference at one of his Florida resorts.

To be sure, Trump is still very much doing things his way. His pledge to help other candidates came just before a lengthy promotion of his brand, all while flanked by tables of Trump wine — as well as bottled water and a display of raw steaks, which he no longer sells. His calls for party unity are still bracketed by jabs at rivals “Little Marco” Rubio and “Lying Ted” Cruz.

But there are clear indications that Trump is confident he’ll emerge from the turbulent primaries as the GOP nominee — and that he knows he has work to do to broaden his appeal with general election voters and his own party’s leaders.

Trump’s rivals have one more chance to slow his momentum in next Tuesday’s winner-take-all contests in Florida and Ohio. But unless Trump is slowed in those states, Rubio, Cruz and Ohio Governor John Kasich will be left with nothing but long-shot options such as a contested convention to block the real estate mogul.

One party concern about a Trump nomination is that he would cost the GOP both the White House and its Senate majority. In battleground states like Ohio and New Hampshire in particular, Republican senators up for reelection could face constant questions about his policies and personal insults, forcing them to talk more about him than their own campaigns.

In a step toward allaying those worries, Trump has begun signaling to Republican lawmakers that he wants to be their ally, not their burden.

“I would love to see the Republican Party and everybody get together and unify,” he said after a strong showing in last week’s Super Tuesday contests. “And when we unify, there’s nobody, nobody that’s going to beat us.”

Trump has made initial overtures to Senate Majority Leader Mitch McConnell and House Speaker Paul Ryan, and has endorsements from a handful of U.S. lawmakers and two governors. But his interactions with Republican elected officials appear to have been limited.

“I’ve had my phone on, but nobody’s called,” said Senator Steve Daines of Montana.

Georgia Senator Johnny Isakson said that while he’s sure a call from Trump will come, it “hasn’t happened yet.”

Following in the footsteps of many presidential nominees, Trump has begun signaling more moderation on policies that are important to general election constituencies.

Trump rocked the GOP race last summer with his call for building a wall across the entire length of the U.S-Mexico border and for deporting all 11 million people in the country illegally — a position out of step with the party’s stated goal of comprehensive immigration reform.

Now he’s emphasizing the importance of politicians having flexibility on key issues.

“In terms of immigration and almost anything else, there always has to be some tug and pull and deal,” Trump said during the most recent Republican debate.

“That will change once this is all over,” said Trump.

To some Republicans skeptical of Trump, his recent moves are less a smart general election play and more a sign that he lacks core principles.

“He is this amorphous political creature who will be whatever he needs to be for voters, whenever they need him to be it,” said Kevin Madden, who advised 2012 Republican nominee Mitt Romney.

“This is beyond etch-a-sketch,” Madden added, referring to a critique leveled on Romney when his positions changed. “It’s more like Transformers.”