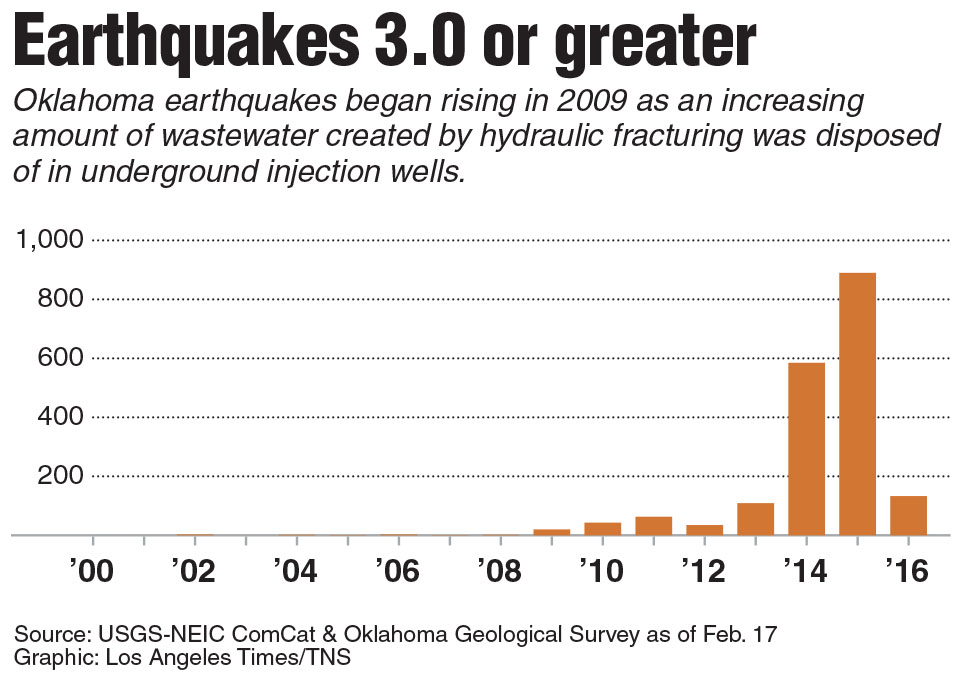 They feel them in the little city of Cushing, where a web of pipelines and giant oil storage tanks makes the area a crucial international hub — and vulnerable. They feel them in the time-capsule town of Guthrie, where plaster is cracking in storefronts built in the 19th century. And they feel them in rural Fairview, where cows get loud when pastures move beneath them.

“This last one, I thought the building was coming down,” said Jason Levings, 29, speaking outside the Fairview feed store where he works and which, he was grateful to note, was still standing. “It was intense.”

More than five years after Oklahoma first experienced a startling increase in earthquakes linked to the disposal of huge volumes of wastewater created by hydraulic fracturing for oil, the state continues to shake and the number of strong quakes is increasing. In 2009, there were 20 quakes of magnitude 3.0 or higher, according to the United States Geological Survey. Last year, there were 890. In 2009, no quake measured 4.0 or greater. Last year, 30 did.

Yet even as many Oklahomans track seismic data on their smartphones and struggle to sleep through the long, rumbling nights, there has been one notable location where people rarely seemed rattled. That is here, in the state capital, where the oil industry holds so much sway that for decades drill rigs have extracted crude from directly beneath the Capitol building.

A Democratic state lawmaker, Cory Williams, said in an interview: “They own the place.”

Now, however, after quakes have shaken the homes of some top elected officials — and those of the worried constituents who vote for them — the state is taking new steps to address the problem, even as critics say it is too little, too late.

Last month, the Oklahoma Corporation Commission, the agency that regulates the oil and gas industry, asked oil producers operating in the northwest part of the state to reduce by 40 percent the amount of wastewater they dispose of deep underground.

Scientists say natural faults in the area are being stirred by billions of gallons of water injected deep into the ground after it is used for hydraulic fracturing, commonly known as fracking. Water and chemicals are used to break oil and gas free from rock formations. A large amount of the water returns to the surface and, under federal law, must be disposed of in a way that does not affect freshwater supplies.

Also last month, the speaker of the Oklahoma state House, Jeff Hickman, a Republican who represents Fairview, sponsored a bill that clarifies that the commission has the power to take enforcement actions — not just to politely ask the industry to change.

And late in January, Gov. Mary Fallin, a Republican who only last summer acknowledged the connection between earthquakes and oil production, announced that she would direct $1.4 million in emergency funds to the commission and to the Oklahoma Geological Survey to hire more staff and improve technology and monitoring equipment.

On Feb. 13, a quake northwest of Fairview, about two hours away, registered a magnitude of 5.1, making it the third-strongest quake in the state’s recorded history. The strongest was in 2011. The second-strongest was in 1952; and scientists now say it, too, may have been induced by nearby oil production.

“What’s changed is the earthquakes have come back, and they’ve come back to an area where the people know how to make noise,” said Matt Skinner, a spokesman for the Oklahoma Corporation Commission. “They have the money. They have the power.”

Skinner said he is weary of hearing that the commission is in the pocket of the industry, that it is ignoring science and that it should order a moratorium to stop all disposal wells. The first and second are not true and the third would not stand up in court, he said, because of the challenge of directly linking specific disposal actions to specific quakes.