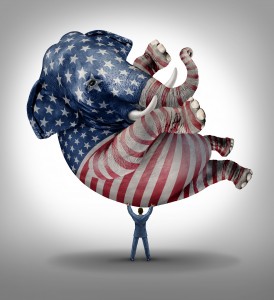 The calamity brought upon the Republican Party by Donald Trump was laid bare Thursday by its two most recent presidential nominees, who delivered unprecedented denunciations of the candidate that set the stage for a raucous evening debate.

Mitt Romney awoke from his political hibernation to deliver a sweeping, point-by-point indictment of Trump – of his policy proposals, his business dealings, his erratic judgments, his moral character, and his insults to women, Latinos and the disabled. The former GOP nominee, who sought and accepted Trump’s endorsement in 2012, implored Republicans to now reject the billionaire he labeled “a phony” and “a fraud.”

Trump’s three rivals took up similar attacks later Thursday night at a Fox News Channel debate in Detroit in which the ferocious sparring and name-calling revolved almost entirely around the front-runner.

Taken as a whole, the day only served to harden the divisions tearing the GOP apart and raise dire doubts about whether its factions could unite in the general election.

It began at sunrise in Palm Beach, Florida, where Trump phoned into network television shows to mock Romney as a failed politician. Then, in Salt Lake City, Romney gave his speech asserting that Trump was a danger to the nation and to democracy itself; in Washington, Sen. John McCain (Arizona) shared in the dismay; in Trenton, New Jersey, Gov. Chris Christie called a news conference to insist he was not a prisoner of Trump’s; and in Portland, Maine, Trump rallied fans by demeaning Romney with crude language.

The events culminated at nightfall in Detroit, where Sens. Marco Rubio of Florida and Ted Cruz of Texas and Ohio Gov. John Kasich faced Trump and tried desperately to score points against him.

The very first question was aimed at Trump, and for the next two hours the moderators and candidates quizzed, scrutinized and mocked the front-runner. He was on the defensive through much of the event, struggling to explain many of his policy ideas as well as defend his hiring of foreign workers and the manufacturing of Trump-branded clothing overseas.

“You’re making your clothes overseas, and you’re hiring your workers overseas,” Rubio said at one point, referring to the widespread use of foreign workers on visas at Trump’s Mar-a-Lago property in Palm Beach.

Trump acknowledged that he brings in foreign workers to do jobs on work visas at his club and, defending himself, said it is difficult to get American employees to work in service for the five-month period he called “the season.”

Trump reversed himself on a key part of his immigration platform, calling for an increase in visas for highly skilled foreigners. “I’m changing,” he said. “We need highly skilled people in this country.”

Trump added, “With immigration – as with anything else – there always has to be some tug and pull and deal. . . . You have to be able to have some flexibility, some negotiation.”

The evening’s fireworks came when the candidates, exhausted after three months of breakneck campaigning, leveled caustic attacks at one another.

“This little guy has lied so much about my record,” Trump said of Rubio, whom he repeatedly called “Little Marco.”

At times, the debate was so focused on the personal that Kasich thundered, “Let’s stop fighting!”

Cruz, too, sought to claim the moral high ground.

“I don’t think the people of America are interested in a bunch of bickering schoolchildren,” he said. “They are interested in solutions, not slogans. It’s easy to say ‘Make things better, make things great.’ You can even print it and put it on a baseball cap. But the question is, do you understand the principles that made America great in the first place?”

Rubio and Cruz pounced on Trump regarding fraud cases filed against him and a real estate training company known as “Trump University.” Rubio said the university was “a scam.”

“The real con artist is Senator Marco Rubio,” Trump shot back, bringing up Rubio’s attendance record in the Senate. “He doesn’t go to vote. He’s absent. The people of Florida can’t stand him. He couldn’t get elected as dogcatcher.”

Cruz asserted that the GOP cannot afford a nominee “facing a fraud trial.”

“Let me just ask the voters at home,” Cruz said, “is this the debate you want playing out in the general election?”

The 11th Republican debate also marked a return engagement for Trump in his off-and-on feud with Fox News anchor Megyn Kelly, one of the co-moderators. She asked him about the possibility that he might change his immigration policies once he gets into office, citing an off-the-record meeting with the New York Times that was reported by BuzzFeed.

Rubio and Cruz tag-teamed Trump, insisting that he give the newspaper permission to release the interview. “He has a very simple solution,” Cruz said. “Simply release the tape.”

Cruz seized on the episode and others to prosecute his case that Trump has no ideological core and is flexible on a range of issues important to the conservative base.

The hottest topic in Michigan – the tainted water scandal in Flint – was brought up in only one question, and it came more than halfway through the debate. Only Rubio was given the chance to respond, and when he did so he expressed outrage while also complaining that Democrats have politicized the issue “as if somehow Republicans woke up one morning and decided, ‘Oh, it’s a good idea to poison some kids with lead.’ It’s absurd, it’s outrageous.”

Romney set the tone for the debate with his morning address at the University of Utah, where he methodically litigated the case against a Trump presidency.

“Donald Trump is a phony, a fraud,” Romney said. “He’s playing members of the American public for suckers.”

Romney, himself a onetime business titan worth hundreds of millions of dollars, sought to rub away at Trump’s golden sheen.

“His bankruptcies have crushed small businesses and the men and women who work for them,” Romney said. “Whatever happened to Trump Airlines? How about Trump University? And then there’s Trump Magazine and Trump Vodka and Trump Steaks and Trump Mortgage. A business genius he is not.”

Romney said the president helps define the values and principles of the United States for the world and sets an example for young Americans. He asked his audience of roughly 700 students and other guests to ponder Trump’s “personal qualities”: “the bullying, the greed, the showing off, the misogyny, the absurd third-grade theatrics.”

Trump fired back with a verbal tirade a couple of hours later at his Maine rally. He bemoaned Romney’s “nasty” critique and dismissed him as a “choke artist” who, in Trump’s assessment, botched an easy chance to turn President Obama out of office.

Trump recalled his endorsement on Romney in February of 2012, describing the candidate as yearning for Trump’s stamp of approval.

On the debate stage, Trump dismissed Romney in similar terms: “He failed miserably, and it was an embarrassment to the entire Republican Party.”

The clash comes at a crucial point in this unpredictable GOP primary season. Trump has won 10 of the first primaries and caucuses, including dominating this week’s Super Tuesday contests, and has a significant lead in the race for Republican convention delegates.

But in a divided field, Trump still has fewer than half the delegates awarded so far. That leaves his opponents with a viable, if risky and destructive, strategy. The only way to stop Trump from winning the nomination may be to stop anyone from winning it – dividing up the delegates so that no one has a majority.

Then, the theory goes, the party would head into a chaotic convention – the first true “floor fight” for any party in decades – and hope that a candidate other than Trump emerges.

It was unclear whether Romney’s speech would move any voters away from Trump. It could have the effect of intensifying support for the rebellious outsider.

But within the Republican establishment, Romney’s speech drew immediate and enthusiastic praise. Within minutes, McCain issued a statement effectively joining forces with Romney.

“I want Republican voters to pay close attention to what our party’s most respected and knowledgeable leaders and national security experts are saying about Mr. Trump, and to think long and hard about who they want to be our next Commander-in-Chief and leader of the free world,” McCain said.

But not every member of the establishment was speaking out against Trump. Christie has been Trump’s most visible endorser of late, standing stone-faced behind Trump at his victory event Tuesday night in Palm Beach. It has sparked mocking memes on social media.

Christie addressed that at his news conference in Trenton on Thursday.

“I want everyone to know for those who were concerned: I wasn’t being held hostage, I wasn’t upset. I wasn’t angry. I wasn’t despondent,” said Christie, who ended his candidacy last month after a disappointing finish in New Hampshire.