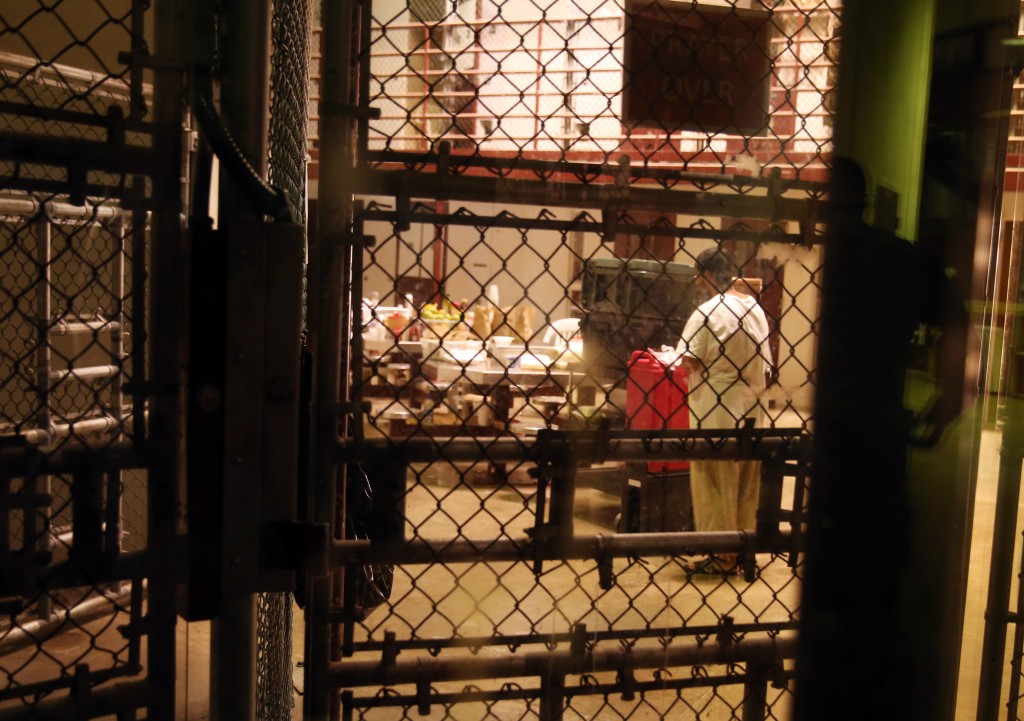 Empty cells outnumber occupied ones. There are fewer prisoners than the assorted medical personnel to care for them. The number of hunger strikers is down to a handful.

After 14 years, the detention center on the U.S. base at Guantanamo Bay, Cuba, appears to be winding down despite opposition in Congress to President Barack Obama’s intent to close the facility, which once held nearly 700 people, and confine the remaining prisoners someplace else.

A military task force of 2,000 is now devoted to holding just 91 men, a number expected to drop by a third this summer.

The military this week allowed journalists inside the detention center, a cluster of camps encircled by razor wire amid the rolling hills and cactus of southeastern Cuba, for the first time since a series of recent releases brought the population below 100, the lowest number since shortly after it opened to hold suspected enemy combatants. Officials portrayed the environment as calmer, with few attacks on the Army soldiers who guard the men and fewer disciplinary problems overall, perhaps related to the fact that for many their long period of confinement is nearing an end.

“I believe there is some optimism on the part of the detainees who are left here that they might be next,” said Army Col. David Heath, commander of the guard force.

Obama is expected later this month to submit a Guantanamo closure plan to Congress, where it is likely to encounter the same resistance that has prevented the president from making good on the vow to close the facility he made shortly after taking office. Soon, however, officials hope there may be so few prisoners that some of the opposition will melt away.

The remaining prisoners include 34 whom authorities have determined can be released without a security risk, most of whom are from Yemen. The U.S. won’t send Yemeni prisoners to their homeland because it is too unstable and it must find other countries to take them. Lee Wolosky, the State Department’s special envoy for Guantanamo Closure, said in January that it was expected to be done by the summer.

The remaining 57 pose a more complex challenge. Some cannot be charged because there is insufficient evidence against them or what there is has been tainted by their treatment in custody. Some were either designated for prosecution or for indefinite detention under the international laws of war. Seven of those in custody are in the early stages of trial by military commission, including the five men accused of planning and aiding the Sept. 11 terrorist attack, and three have been convicted and are serving sentences.

But military commissions have proven to be grindingly slow so the government is looking at “alternative dispositions” that would include transferring them overseas for prosecution in another country, according to an administration official. The official, who spoke on condition of anonymity because he was not permitted to discuss internal matters, declined to say which prisoners or where they might be sent but said they number about a dozen and would be sent to places whose citizens were victims of terrorist attacks.

The Justice Department is also considering an argument by lawyers for Guantanamo prisoners that some could be charged in federal court, something that had previously not been considered legally feasible. That option would increase the number who could be charged following court rulings that limited the jurisdiction of military commissions in terrorism cases.

Wells Dixon, a lawyer for a prisoner who pleaded guilty in the military commission and is awaiting a chance to testify in the slowly moving Sept. 11 case as part of a plea agreement, welcomed that approach. “I do think as a general matter that if the administration is serious about closing Guantanamo they are going to have to think creatively about options like federal court prosecutions,” he said.

The administration official said that through a combination of measures they could reduce the number of prisoners currently held at Guantanamo to an “irreducible number,” that could be small enough to make their presence in the United States acceptable to Congress.

“We are looking at ultimately two dozen people who we would be looking at holding in the United States. It’s a lot better than 90,” the official said.

At Guantanamo, which held nearly 680 prisoners at its peak in 2003 and about 245 when Obama took office, the dwindling population has made for a quieter detention center and one that is only partially being used. Half of the eight blocks in Camp 6 are being used and three of the four in Camp 5. Much of an area known as Camp Delta that used to house hundreds of prisoners is now used for administrative offices.

Marine Gen. John F. Kelly, commander of U.S. Southern Command until he left the post last month, said the operating budget for the detention center is about $100 million.

For now, officials at the base said there are no plans to reduce the guard force or cut back troops, though they may consolidate prisoners within the camps. “We are looking at different ways to create efficiencies here and reduce the bill for the taxpayer,” Heath said.