Democratic Campaign Has a New Ferocity 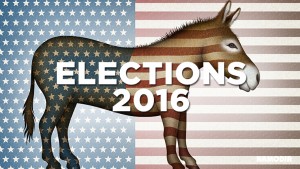 Hillary Clinton and Bernie Sanders, meeting Thursday night for their last debate before the New Hampshire primary, squared off fiercely on the question of whether the party should strive toward its liberal aspirations or set its sights on the achievable.

The dynamic between the two contenders for the Democratic presidential nomination was far more intense – and far more personal – than it has been in their previous face-offs. That reflected how close their race has become in the wake of a virtual tie in Monday’s Iowa caucuses. The debate was sponsored by MSNBC and the New Hampshire Union Leader.

Clinton used her opening statement to needle the senator from Vermont, who describes himself as a democratic socialist, over what she has contended are unrealistically liberal plans for universal health care, free college and other programs.

“I’m fighting for people who cannot wait for those changes, and I’m not making promises that I cannot keep,” the former secretary of state said.

Sanders replied that a number of European countries had approved single-payer health-care systems. “I do not accept the belief that the United States of America cannot do that,” he said.

As they had at a town hall forum the night before, the two remaining Democratic presidential contenders also squabbled over the modern definition of the word “progressive,” which has become the preferred term for the Democratic left.

“A progressive is someone who makes progress,” Clinton said.

Sanders, who enjoys enormous enthusiasm among the party’s liberal base, continued to make the argument that Clinton is too heavily dependent on those who have financed her campaign and made her personally wealthy. He said that he does “not only talk the talk, but walk the walk. I am very proud to be the only candidate up here that does not have a super PAC.”

Clinton accused Sanders of engaging in a “very artful smear” of her character. She insisted she had never changed her position on any issue based on having received contributions from special interests.

“Senator Sanders has said he wants to run a positive campaign. I’ve tried to keep my disagreements over issues, as it should be. But time and time again, by innuendo, by insinuation, there is this attack that he is putting forth,” Clinton said.

Defending the paid speeches she gave in the period between leaving the State Department and announcing her presidential campaign, Clinton said she may not have done a good job of explaining what she was doing.

“They wanted me to talk about the world” and how she saw threats and challenges, Clinton said of the groups that paid her fees of $200,000 and more.

Asked whether she would release transcripts of closed-door, paid speeches, Clinton replied, “I will look into it.”

The two contenders, voices raised, argued over whose plan and ideas would more effectively police Wall Street and the larger financial system.

“Break them up!” Sanders thundered, referring to the nation’s biggest banks.

Clinton said leading economists have judged her regulation proposals to be tougher.

But Sanders kept bringing the argument back to her ties to Wall Street. Through the end of December, the financial industry had given at least $21.4 million to support Clinton’s 2016 presidential run – more than 10 percent of the $157.8 million amassed to back her bid, according to an analysis of Federal Election Commission filings by The Washington Post.

Clinton also was asked whether she could guarantee that repercussions from her use of a private email system at the State Department would not “blow up” her campaign. She said she is “100 percent confident” that an FBI security review will come to naught.

“I have absolutely no concerns about it,” she said.

The Clinton team is expecting a loss in New Hampshire, the state that resurrected her 2008 campaign after a devastating third-place finish in Iowa. This time, she battled to the narrowest of wins in the Iowa caucuses.

On Thursday, two new New Hampshire polls indicated that she has much ground to make up against Sanders before Tuesday’s primary.

An NBC News-Wall Street Journal-Marist College survey had Clinton running 20 points behind Sanders in New Hampshire, 58 percent to 38 percent. A tracking poll by CNN-WMUR – the kind of daily gauge whose results are more volatile – showed an even wider margin, with Sanders beating Clinton by better than two to one, 61 percent to 30 percent.

So it was no surprise that Clinton’s campaign was aggressively playing down expectations.

At a breakfast Wednesday morning sponsored by Bloomberg Politics, Clinton campaign manager Robby Mook told reporters: “We face some pretty significant head winds here in New Hampshire. Senator Sanders has been leading here for some time, since the summer. It’s hard to underestimate the neighboring-state advantage in this race.”

However resigned Clinton’s team may be to a loss here Tuesday, it thinks the electoral terrain will turn in her favor afterward, as the campaign moves to states with more diverse populations. The Sanders operation, however, has warned that they have been organizing in other states, including South Carolina and Nevada, and should not be underestimated.

Sanders is also proving to be a fundraising powerhouse, reaping millions from small donors over the Internet, which means he has the capacity to continue his campaign for a long time.

On Thursday, Clinton played up what she sees as her greater electablity in a general-election contest in November.

“I’ve been vetted. There’s hardly anything you don’t know about me,” an asset in the “withering” scrutiny of the general election, Clinton said.

Sanders brushed aside a question about his electability. He cited polls that suggest he would run stronger than Clinton against GOP front-runner Donald Trump in a number of battleground states.

He also cited the enthusiasm that he is generating: “Democrats win when there is a large voter turnout, when people are excited, when working-class people, middle-class people, young people are engaged in the political process.”

“I am the strongest candidate to take it to the Republicans and win in November,” Clinton said.

Shortly before the debate, the Clinton campaign released unofficial fundraising figures for January showing she brought in $15 million, which is $5 million less than Sanders received in the same period. Clinton’s team has been warning supporters of a Sanders donation surge and noting that he is already outspending her in television advertising in the early-voting states.

The Clinton campaign also confirmed that she will break from campaigning in New Hampshire on Sunday to visit Flint, Mich., where a cost-saving decision led to dangerous levels of lead in the city water. The crisis in the economically depressed, heavily African American city has become a cause celebre among liberals, and Clinton has been in the forefront of criticism of the state’s Republican leadership for falling down on the job. She claims some credit for pressuring the governor to accept federal help.

Her allies have used the Flint crisis as a point of comparison with Sanders, saying that his call for the governor to resign did nothing to help the city’s residents.

The Flint issue and Clinton’s hastily scheduled trip also serve to divert attention from her falling fortunes in New Hampshire.

Although she will campaign in New Hampshire for part of the day, her departure will be read as an attempt to change the subject from her tenuous position here.