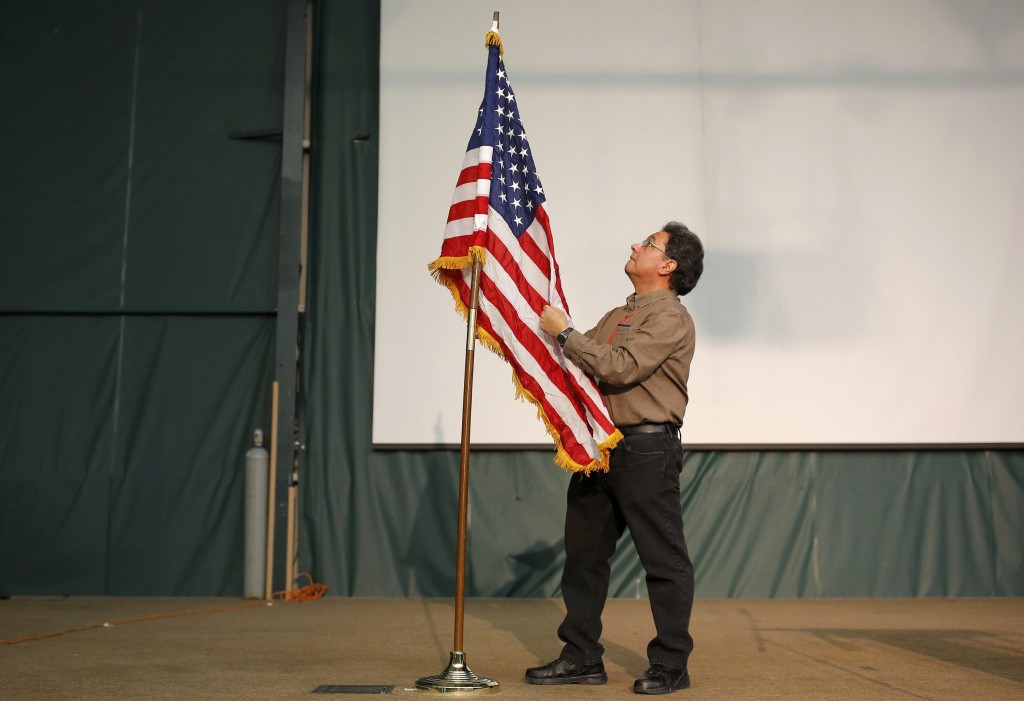 Sen. Ted Cruz of Texas delivered a hard-fought upset win over businessman Donald Trump in the Iowa Republican caucuses on Monday night, making good on his bet that a methodical campaign organization would eclipse the New Yorker’s media dominance in the first test of GOP voters.

With 99 percent of the precincts reporting, Cruz was besting Trump by more than 5,100 votes, with fellow senator Marco Rubio of Florida a close third. Cruz appeared to capitalize on deep support from religious and social conservatives and showed that old-fashioned retail politicking could overcome Trump’s massive political rallies in the Hawkeye state.

On the Democratic side, Hillary Clinton was holding a narrow 50 percent to 49 percent lead over Sen. Bernie Sanders (I-Vt.) late in the vote tallying, as months of heated rhetoric and fierce jockeying in the 2016 race for the White House was finally put to the test.

Former Maryland governor Martin O’Malley had negligible support and was expected to suspend his campaign on Monday night, according to a person close to his campaign.

Trump had led the Republican polls since last summer, shortly after he declared his candidacy, and he had seemed to rewrite the traditional rules and expectations of national political campaigns. Yet his outsider appeal, which swelled crowds at rallies, failed to translate entirely to the caucus turnout, and some political analysts questioned his decision to drop out of the final GOP debate last week.

Instead, Cruz outperformed his final polling results in Iowa, after aides touted a strong ground game in which the senator appeared at events in all 99 counties. Cruz had 28 percent of the vote, with Trump at 24 percent and Rubio at 23.

Whether Cruz can translate the win into similar success in New Hampshire is uncertain, as the past two Iowa winners, Pennsylvania’s Rick Santorum in 2012 and Arkansas’s Mike Huckabee in 2008, each failed to win the nomination.

Rubio did far better than expected, with a late rally of support as he sought to consolidate support among establishment Republicans who have doubted Trump and Cruz. Former Florida Gov. Jeb Bush, who started the campaign as a prohibitive front-runner and a massive campaign war chest, finished way back in the pack. Bush wasn’t even in the state on Monday, campaigning instead in New Hampshire, whose primaries will be held next week.

“This is your turn!” a supporter responded.

“Tonight here in Iowa, the people in this great state sent a very clear message that after seven years of Barack Obama, we are not waiting any longer to take our country back,” Rubio said.

Voters gathered at caucus sites in 99 counties around the state. The last-minute lobbying officially began at 7 p.m. Central time, with votes following. Political operatives predicted a high turnout–and there were reports that some sites were so packed that officials had trouble closing the doors – despite a significant snowstorm that was bearing down on the state. Forecasters said the storm would likely hit after the caucuses were closed.

Trump and Sanders made their final pushes on Monday to coax non-traditional voters to the caucuses here, even as their chief rivals suggested well-tested organizing tactics would give them the crucial margin of victory instead.

“We are going to bring our country back,” Trump told the caucus crowd, speaking into a microphone. Reflecting on a campaign that was dismissed early on by the political establishment in Washington, Trump said: “It’s really been a journey, an amazing journey. I’m a messenger. We’re going to run it the way it’s supposed to be run – as a great, great country.”

Other candidates also visited live caucus locations, including Republican business woman Carly Fiorina, who was at the same event as Trump. Cruz and Sen. Rand Paul, R-Ky., both visited the large Linn County caucus in Cedar Rapids. Rubio was scheduled to visit three caucus sites, according to his staff.

Earlier in Waterloo, Iowa, Trump blasted Cruz as a politician indebted to special oil interests. He told voters that his chief caucus rival would, without a doubt, end the federal renewable fuels standard, a key issue in the state.

“I don’t want to use names, but I will, okay? I’m looking at the money put up by Ted Cruz, for Ted Cruz. It’s incredible, the people there. It’s controlled. And he will destroy your ethanol business 100 percent. One hundred percent,” he said. “He’s financed by oil people, and the oil people don’t want ethanol, it’s very simple. Your ethanol business, if Ted Cruz gets in, will be wiped out within six months to a year.”

Cruz and his team ignored the attacks and focused on rallying their supporters to get out to the caucus sites. Cruz appeared at a community center in Jefferson, Iowa, to complete a tour of all of the state’s 99 counties, a strategy his aides believe will pay off.

“This race is a statistical tie between me and Donald Trump,” Cruz said. “It all comes down to turnout, who shows up at 7 p.m.”

Cruz’s Iowa director, Bryan English, said many of the senator’s 12,000 volunteers here called their friends and neighbors who might have been on the fence for Cruz, hoping the personal touch persuades them to caucus for him Monday night.

With a massive winter storm looming for the Hawkeye State on Monday night, the campaigns in both parties have closely monitored weather conditions to estimate how voter turnout might be affected. The storm was not expected to hit until after the voting ends.

There is no question that the lack of an incumbent candidate, coupled with the unconventional style of several candidates, has sparked Iowans’ interest in the race this year. Jeff Kaufmann, who chairs the Iowa Republican Party, said his office has been receiving five to six times as many calls compared to past years.

“The phone calls at the Republican Party of Iowa headquarters are absolutely unprecedented. I mean, we’re looking at 100 an hour, literally,” he said. “Now, obviously, not all of that is tied to Donald Trump. There’s also a lot of these calls that are going to a variety of candidates. But I think that’s a sign of the enthusiasm.”

Iowa Gov. Terry Branstad (R) echoed that assessment in an interview, saying Trump has “turned out bigger crowds than we’ve ever seen before.”

“I know everybody is saying, ‘Are they just coming for curiosity?’ But I think they’re for real; they’re committed and will show up for caucuses. I do,” Branstad said. “I’ve been pretty impressed with what they’ve done.

“Of course we saw this phenomenon eight years ago with Obama,” he said, referring to President Obama’s first White House bid. “It was beyond what anyone could have imagined, and I think Trump is a phenomenon, too.”

The Democratic field is much smaller but no less competitive. Clinton, whose comfortable lead in Iowa evaporated earlier this year, has scrambled to try to fend off Sanders, who has attracted massive crowds and an intense grass-roots following that has put an Iowa upset within reach. Former Maryland governor Martin O’Malley is far behind and could see his candidacy come to an effective end Monday night.

Sanders was encircled by volunteers and a crush of reporters as he arrived late Monday morning at his Iowa headquarters in a strip shopping center outside downtown Des Moines.

“We have come a long, long way in the last nine months,” the Vermont senator told his supporters. “You’ve got a tied ball game, that’s where we are.”

Sanders also pushed back against critics who’ve suggested his agenda is too radical. “Our platform, our agenda, is precisely what the American people want,” he said.

Clinton sought to bolster a group of 60 volunteers in her south Des Moines office by dropping by Monday morning with glazed doughnuts and coffee.

Former Iowa senator Tom Harkin, a Clinton supporter, said in an interview Monday in Des Moines that the former secretary of state “has a tremendous organization, better than even Obama had.”

“We have 1,681 precincts in Iowa, and Hillary has a precinct captain in each one. Obama only had about 1,200 of them covered,” he continued. “Yes, Sanders has a strong message and a strong persona, so the tide maybe went to him early on. But the tide has come back our way.”

While Democratic activists tend to flirt with the idea of picking a liberal firebrand as their nominee, Harkin said, they always settle for a more pragmatic candidate.

Rubio began the day by making a pitch to the supporters of long-shot candidates on ABC.

“I hope people tonight, when they go to their caucus site, perhaps they are supporting someone that is not doing as well, they would consider caucusing for me because we can win,” he said, before heading off to three caucus sites in the Des Moines area.

Retired neurosurgeon Ben Carson, whose campaign has stalled but who is still drawing about 10 percent in Iowa polls, remained determined Monday to hold onto his devoted base here, which sees Carson as a unique spiritual and political leader who could calm what they see as a volatile culture.

Carson campaign chairman Robert F. Dees said Monday that turning out supporters of Israel was a prime target. “I went to Maccabee’s yesterday, and we had a huge crowd,” he said of Des Moines’ lone kosher deli. “I said, ‘You will know a tree by its fruit.’ Just look at the life of Ben Carson.”

Beyond the top three sits a crowded pack of Republican candidates who have failed to pick up much momentum in Iowa. They include former Florida governor Jeb Bush, New Jersey Gov. Chris Christie, Ohio Gov. John Kasich, former Hewlett-Packard chief executive Carly Fiorina, and the last two Iowa caucus winners, former senator Rick Santorum (Pa.) and former Arkansas governor Mike Huckabee. Nonetheless, how well they do could determine how well Cruz and Rubio do, since all will attract some support that could bolster the two senators.

Sensing that they stand virtually no chance of a strong showing, Kasich, Bush and Christie will spend caucus night in New Hampshire, the next state to vote and where their prospects are better.