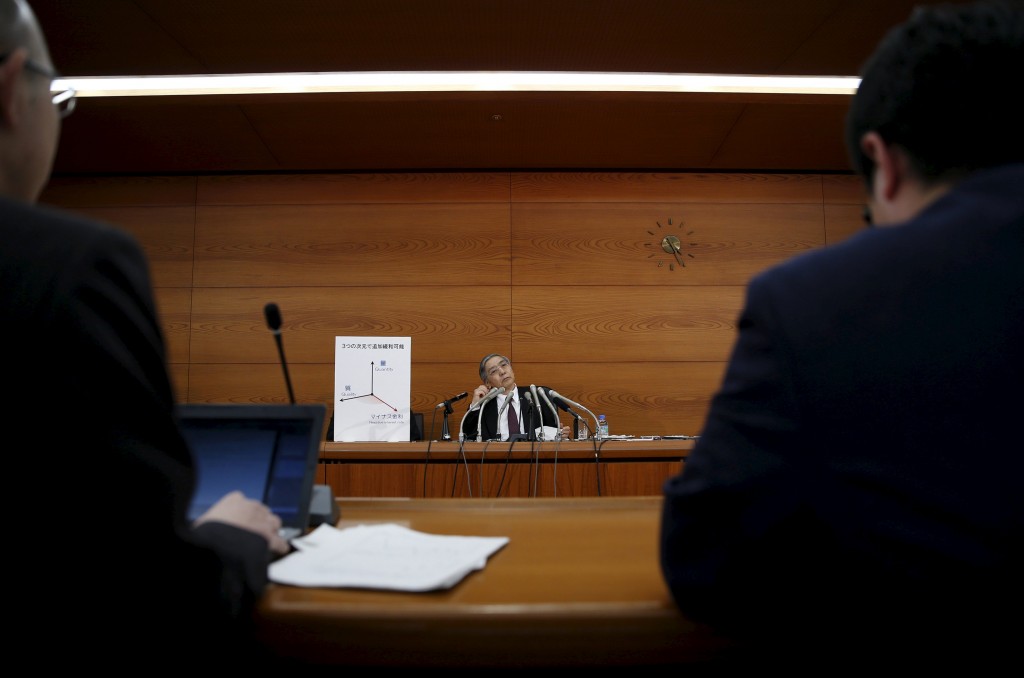 The Bank of Japan unexpectedly cut a benchmark interest rate below zero on Friday, stunning investors with another bold move to revive the economy as volatile markets and slowing global growth threaten its efforts to beat deflation.

Asian shares jumped, the yen tumbled and sovereign bonds rallied after the BOJ said it would charge for a portion of bank reserves parked with the institution, an aggressive policy pioneered by the European Central Bank (ECB).

“What’s important is to show people that the BOJ is strongly committed to achieving 2 percent inflation and that it will do whatever it takes to achieve it,” BOJ Governor Haruhiko Kuroda told a news conference after the decision.

In adopting negative interest rates Japan is reaching for a new weapon in its long battle against deflation, which, since the 1990s, have discouraged consumers from buying big because they expect prices to fall further. Deflation is seen as the root of two decades of economic malaise.

“But there’s a risk [that] recent further falls in oil prices, uncertainty over emerging economies, including China, and global market instability could hurt business confidence and delay the eradication of people’s deflationary mindset,” he said.

“The BOJ decided to adopt negative interest rates … to forestall such risks from materialising.”

Kuroda said as recently as last week he was not thinking of adopting a negative interest rate policy for now, telling parliament that further easing would likely take the form of an expansion of its massive asset-buying program.

But in a narrow 5-4 vote, the BOJ’s policy board decided to charge a 0.1 percent interest on selected current account deposits that financial institutions hold with it.

The central bank said in a statement announcing the decision that it would cut interest rates further into negative territory if necessary, in its battle against deflation.

“Kuroda had been saying that he didn’t think something like this would help so it is a bit surprising, and it’s clear the market has been surprised by it,” said Nicholas Smith, a strategist at CLSA based in Tokyo.

Several European central banks have cut key rates below zero. In pursuing that path, the BOJ is hoping banks will step up lending to support activity in the real economy, rather than pay a penalty to deposit excess cash at the central bank.

There is little sign of any pent-up demand from Japanese banks or cash-rich companies for fresh funds, however, and any money released into the system may merely be hoarded or steered into speculative activity.

“This is an aggressive all-stick-no-carrot approach to spurring investment,” said Martin King, comanaging director at Tyton Capital Advisors in Tokyo.

The BOJ maintained its pledge to expand base money at an annual pace of 80 trillion yen ($675 billion) via aggressive purchases of Japanese government bonds (JGBs) and risky assets conducted under its quantitative and qualitative easing (QQE) program.

The BOJ’s move – boosting the dollar by 1.7 percent against the yen – could make it even harder for the U.S. Federal Reserve to raise interest rates four times this year, as originally envisaged by its policy board.

Markets have been split on whether Japan’s central bank would ease policy since slumping oil costs and soft consumer spending have ground inflation to a halt, knocking price growth further away from the BOJ’s ambitious 2 percent target.

This is the fourth time the BOJ has pushed back its time frame for hitting its inflation target – from an initial goal of around March 2015.

“I think this is a regime change and the BOJ’s main policy tool is now negative interest rates,” said Daiju Aoki, an economist at UBS Securities in Tokyo. “This shows that the ability to buy more JGBs is limited.”

Kuroda said the BOJ was not running out of policy ammunition.

“Today’s steps don’t mean that we’ve reached limits to our JGB buying,” he said. “We added interest rates as a new easing tool to our existing QQE framework.”

Still, economists at HSBC said they doubted the latest move would prove effective.

“…With interest rates already at record lows, we do not expect these measures to have a significant impact on the real economy, or inflation,” they wrote in a note.